A skillful curriculum to get children future-ready

It has become imperative to prepare young people with employable skills, environmental awareness and ethical action to face a turbulent future 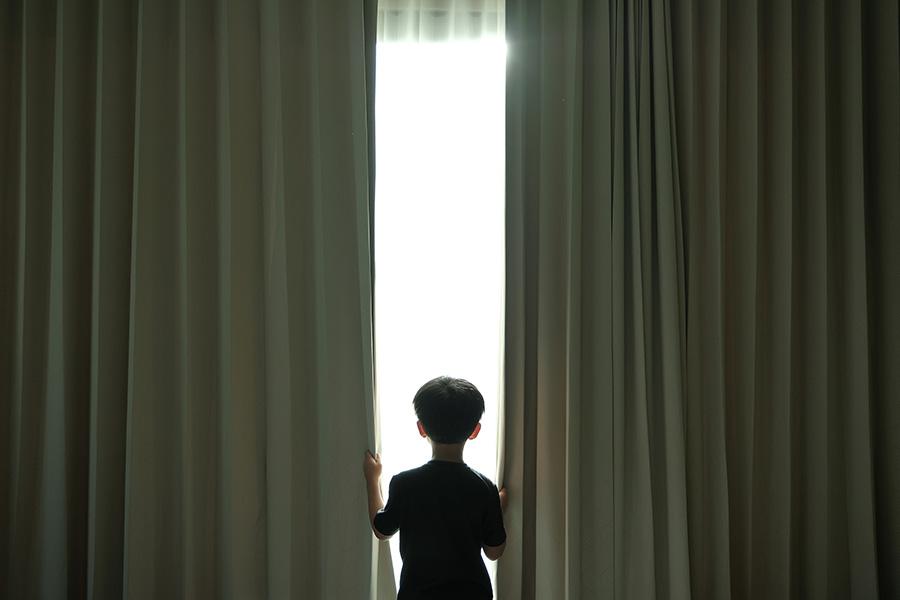 After twenty-odd years, most of what I studied about chemical engineering in college are a hazy blur. Except this.

I was in the library, preparing for a final exam on chemical reaction engineering. In a last-ditch attempt to lift my grades, I crammed arcane concepts like “rate equations," "flow patterns" and "pressure vessels” from my lecture notes. I flipped through the pages of an American reference book until I noticed this unusual problem statement:

“It is the evening of 2nd of December 1984, at the Union Carbide pesticide plant in Bhopal, India. As the engineer in charge of the night shift, you are called in to investigate some unusual meter readings on a tank holding Methyl Isocyanate (MIC) gas. The current temperature, pressure, and reaction conditions in the plant are given below. You have less than 30 minutes to prevent an explosion. Recommend a course of action.”

I was instantly hooked; recognising the lead-up to the “Bhopal Gas Tragedy” that shook the world. An explosion in this plant engulfed the city with toxic MIC gas, killing over 8,000 people and injuring several hundred thousand. I could visualise how refrigerating the unstable MIC gas and making the container water-tight could have prevented a runaway reaction in the first place. Burning the escaping fumes and scrubbing them with caustic soda could have minimised their toxic effect on people and the environment. Most importantly, I realised how ethically responsible management, not cutting corners when it came to safety, could have saved many lives. For the first time, I saw my engineering education could have such impact. Sadly, it came too late. A curriculum that prized theoretical discourse over practical relevance had already sapped my interest in the subject.

Decades later, our curriculum’s lack of relevance remains subject to heated debate. Publication of our “New Education Policy” is much delayed as a high-powered panel headed by eminent scientist K. Kasturirangan deliberates behind closed doors. Our Union Human Resource Development Minister has called for the school syllabus to be cut by half to ease the burden on students. Jacob Koshy counters this view in ‘The Hindu’, asking “So when policy-makers sit to decide on the portions of syllabi that need junking, where would they begin?”

One place to begin is to understand what the future is likely to demand from young people. The Global Risks Report, published by the World Economic Forum, features top global experts’ perspectives on the most challenging risks facing our society. For the last few years, the report has consistently emphasised three critical dangers.

Unemployment continues to rise as technology disrupts workplaces and graduates are ill-equipped for available jobs. Pollution and natural resource depletion have irreversibly degraded the environment. An ethical deficit fueled by increasing inequality and intolerance is tearing societies apart.

Our curriculum must, therefore, prepare our young people not just to survive but succeed in a world shaped by these three tectonic shifts.

Employable skills There is a growing mismatch between the skills the fast-changing jobs market demands and those unemployed workers possess. McKinsey estimates that by 2020, 58 million low-skill workers will look for jobs while 44 million medium-skill positions will remain unfilled in South-Asia and Sub-Saharan Africa. One big reason is automation. Jobs that require repetitive procedures, like accounting, manufacturing and even low-end software programming, are declining. Interestingly, jobs requiring “non-routine” analytical and interpersonal skills are steadily on the rise (See Figure: extracted from “Skills for a changing world” - Brookings), according to MIT and World Bank researchers. 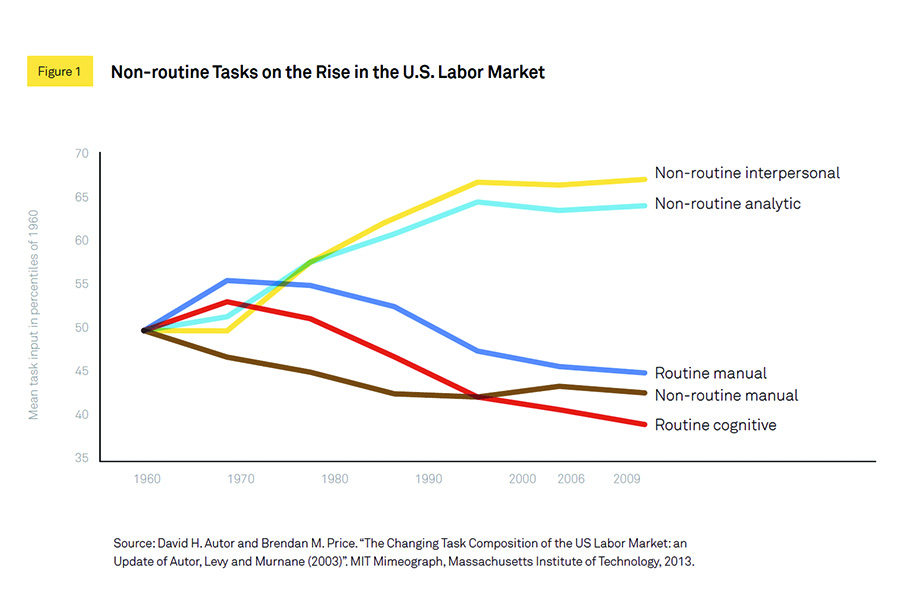 Equipping students for the modern workplace needs the capacity to critically analyse information along with the ability to apply this knowledge creatively to real-world problems, persuasively communicate the solution and collaborate with others. What does such a “skillful” curriculum look like? When young children construct a simple experiment to find out whether “sunlight is important for plant growth”, they learn to think critically by positing hypotheses, testing evidence and drawing inferences. This skill comes in handy when later in life they want to test the efficacy of a public policy or business strategy initiative. When children learn how to balance a home budget they learn not only how to use math concepts In real-life but also build understanding of basic economic principles. While publishing their own school newspaper, children learn how to research, collaborate and communicate in professional settings. Research shows, these skills, when built early on, transfer well to other contexts.

Environmental awareness Sustaining the environment to continue supporting life has become a “must-have” survival skill for every young person. Noted climate change activist and former US Vice-President Al Gore notes that “The accumulated amount of all that manmade global warming pollution is trapping as much extra heat energy as would be released by 400,000 Hiroshima-class atomic bombs exploding every single day.” Its effects are palpable here and now. The ugly smog that choked residents in New Delhi recently, shutting down schools and increasing bronchial diseases among children, was a wake-up call.

The study of environment in schools is limited to few theoretical textbook chapters. This rarely results in instilling new beliefs and behaviors. A rich environmental education must first stoke children’s curiosity and then follow it up with hand-on problem-solving and civic engagement. When children investigate ‘what happens to waste?’ and follow the journey of trash from dustbin to landfill, they build personal connections with environmental issues. By constructing a composting system for use at home they use their knowledge of science to solve a pressing problem. By launching a recycling campaign in their neighborhood children learn to communicate persuasively and engage in civic action. Research on adolescents suggests that environmental engagement helps young people become more optimistic and confident that they can make a difference.

Ethical action
Finally, and most importantly, enabling young people to make sound ethical choices and act as responsible citizens has become non-negotiable. Children, women and minorities are harassed, molested and murdered every day. Shockingly, many of the perpetrators are often angst-ridden youngsters themselves. Teaching traditional values and good morals has therefore preoccupied the education establishment in recent times.

Unfortunately, most value-education curricula boil down to moral science lessons that preach to children about right and wrong. Such preaching is often counterproductive. Research shows that children as young as three can make judgments about what is right and wrong and even explain why. Open-ended stories and ethical dilemmas where children must make choices and understand consequences work better than just being told rules of moral conduct. Children can be taught to control impulses by labelling emotions, setting norms and rewarding delayed gratification. As children grow, curriculum can emphasise the ability to value differences, manage conflict and build healthy relationships.

Traditionalists have argued that basic literacy, numeracy and content knowledge must not be overlooked in a mad rush to teach so-called 21st-century skills. On the other hand, liberals contend that a narrow focus on building employability comes at the cost of education’s broader humanistic ends. These forced distinctions between knowledge vs. skills or skills vs. character are false dichotomies. Teaching generic problem-solving skills in the absence of content knowledge is not useful, and vice-versa. Success in the modern workplace requires a broad range of abilities including empathy and ethics, the foundational values of a good human being.

A curriculum that prepares young people with the skills to be employable, awareness of their environment and the ability to act ethically is no longer a nice-to-have. In fact, it is a matter of life and death. Thousands of innocent people would not have perished that night in Bhopal in 1984 had technologically-skilled, environmentally-conscious and ethically-driven professionals acted in time. Let that not be the case in the future.

20,129
Thank you for your comment, we value your opinion and the time you took to write to us!

Tweets by @forbesindia
Prev
How NGOs leverage CSR to bridge the gap with businesses
Next
Mid-day meal scheme: A nutritious promise to boost learning outcomes