In Madhya Pradesh, a Different Kind of Cloud Storage

With another bumper harvest expected this year in Madhya Pradesh, and with the center indicating its willingness to include Silo Bags as another valid method of grain storage, the sector is likely to see a lot of uptick

After relatively underutilized degrees in computer sciences engineering and an MBA followed by a decade of tangential career choices ranging from technology outsourcing to public relations, I realized my passion lay in connecting the dots between market opportunities, technology, entrepreneurs and the ecosystems that bind them together. A big fan of underdogs and of possibilities, I try my best to tell stories the way my brain sees them.

From a distance and up from the air, the rows of white, cylindrical tubes lying in an open 5-acre field in Goharganj, a small town about 40 kilometers east of Bhopal in Madhya Pradesh, look like giant earthworms that have somehow burrowed their way out of the earth. 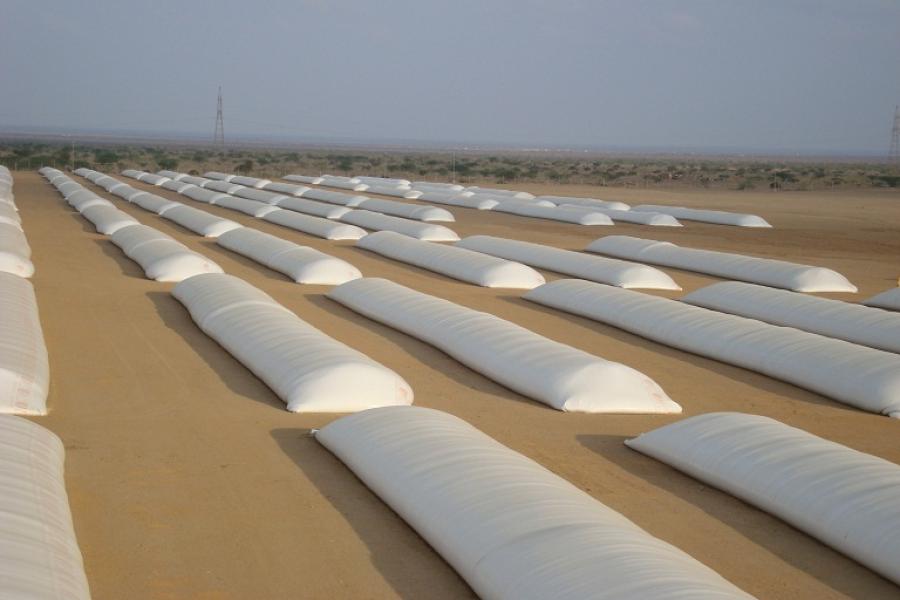 They're not worms, of course. They're "Silo Bags", ingenious and giant polythene bags filled with hundreds of tons of wheat and locked airtight. In January a high-powered government committee recommended that these bags be considered for grain storage across the country, especially when facing problems of plenty.

Now India as a country faces a multitude of problems all the time, but problems of plenty aren't usually in the list.

Now even if they managed to somehow buy a stock of wheat that was nearly twice the size from the year ago, where were they to store it?

Because a perfect storm had cast its shadow over most storage options. There was a massive shortage of jute, used to make the bags in which grain is packed before storing. Even if they did manage to find the bags, most of the traditional storage spaces like warehouses and steel silos were nearly full, leaving only the option to leave the grain out in the open with some flimsy covering - a recipe of spoilage.

Meanwhile farmers were getting worked up, sitting on hundreds of tons of wheat that could not be bought by the state government because it had no place to store them. Protests soon turned violent, with the police having to resort to firing on agitating farmers, killing one.

The government had to do something.

Cloud Storage, On the Ground

Originally invented in Argentina, silo bags were used to provide temporary buffer capacity for the country's crops during years of bumper harvests. Mechanized equipment is used to fill grain into large bags which are then sealed shut on both ends to create a dry and near-airless storage that naturally acts as a barrier to pests and insects. Once filled up and sealed, the bags can be left on flat and open land for 18-24 months, says Parag Agarwal, the director of Panama Agritech, one of the two companies that offer silo bags in India today. The other company is called Silobag India, and tellingly, both currently operate in Madhya Pradesh.

Unlike most other countries around the world where farmers purchase the silo bags and use it themselves, in India they are offered as an on-demand, pay-per-use service where customers don't need to be bothered with the machinery or operational skills required. Of course, the land on which the silo bags are stored often belongs to the customers.

To take the comparison with cloud computing a bit further, here are a few similarities: Silo Bags being binned by Panama Agritech in Madhya Pradesh

With another bumper harvest expected this year in Madhya Pradesh, and with the center indicating its willingness to include Silo Bags as another valid method of grain storage, the sector is likely to see a lot of uptick.

Aggarwal says he is targeting 1.5 million tons of storage using Silo Bags by 2014, up from the 25,000 tons he is currently being paid for by the Madhya Pradesh government. "We've already got a commitment for 275,000 tons for this year," he says.

Even on the pricing front, the rate being paid per ton per month has apparently increased from Rs.42.9 last year, to Rs.58 this year.

Though primarily a short term storage technique, Panama and its peers are offering multi-year storage to governments by undertaking to replace deteriorating bags every 18-24 months on their own, so long as the governments continue to pay the agreed monthly rate.

With Madhya Pradesh alone set to procure 13 million tons of wheat this year, or 165 percent higher than two years ago, the problem of plenty is ready to revisit many Indian states.

This time though, there might be someone to bag it.

15,966
Thank you for your comment, we value your opinion and the time you took to write to us!