The coming of the age of 'smart' beta, and what you should know

The name 'smart beta' can be somewhat misleading because despite the academic rigour that backs factor investing, these strategies, no matter how good can always lag the market and for extended periods at that 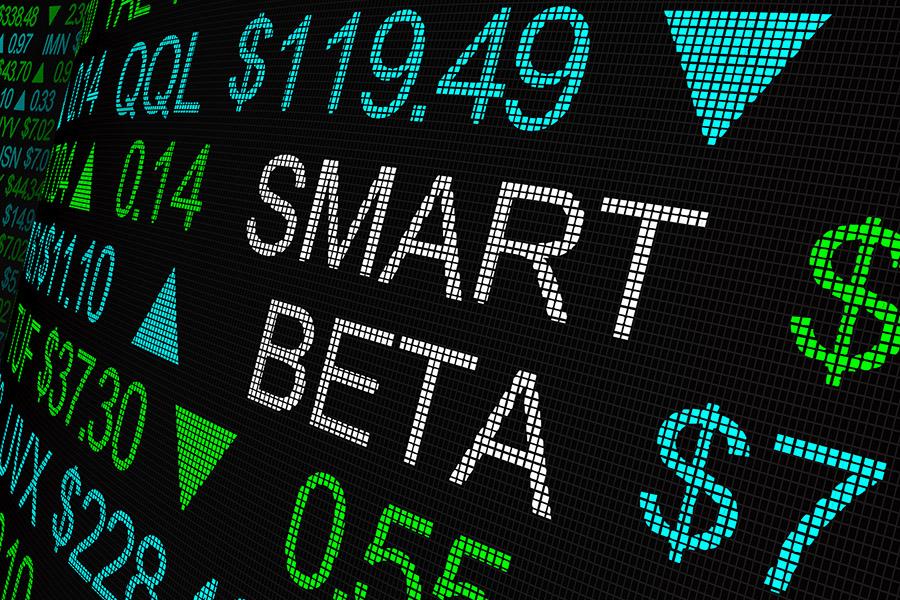 India, especially rural India, skipped the computer age. We moved from traditional to mobile in our consumption pattern. Even though we're still what is called 'developing', things are changing at a tremendous pace, and it's not necessary to follow the exact patterns of the West. Is it possible to do this in the investment world too? Say, can we skip the global movement of regular index investing and move directly to 'smart beta' too? Probably.

Fund managers: The mystery of the vanishing alpha. Read Part 1 & 2 of this series here

The first public index mutual fund was launched by John Bogle in 1975 and the first modern smart beta ETF by Guggenheim Investments debuted in 2003. Despite a growing body of evidence in the US in the 1970s about the underperformance of active management, index funds were first derided and even called 'un-American'. Whatever that means. It took time for the investors to warm up to the idea but when they did, it was a torrential shift to passive funds. The serious threat to active managers began and to stay more relevant, they launched 'smart beta' funds.

But what is smart beta? We know that beta is the volatility of the market as represented by an index. And beta becomes 'smart' when the strategy aims to better the risk versus reward ratio through higher returns or a lower volatility profile. It has evolved out of numerous academic papers that explain how something called factor investing works.

Factor investing means picking out characteristics (factors) that have proven to deliver higher returns. Volatility (lower variation in price movements), momentum (following the trend), value (buying relatively cheaper companies), growth (buying profitable and consistently growing companies), size (smaller companies)–all these are known as factors and it is these variables that underpin smart beta products. So, while it sounds exotic, we can trace the humble beginnings of factor investing all the way back to the father of value investing himself, Benjamain Graham. As you read earlier, value is a major factor in smart beta.

What these ETFs/ funds have done is to get a computer to backtest a factor (or multiple) and manage the model. The fundamental investing process actually remains the same, just that human bias or error is avoided; though it could creep up during the creation process itself. But that's a story for another day.

Even though the advantages and virtues of index investing are paraded everywhere, it is also boring. If your portfolio consists entirely of index funds, how do you boast about your fund selection at the next family event? That's also the reason why people prefer to buy equity shares directly on their own and not through a fund because if you smack one out of the park, you're a hero forever. Smart beta comes to the rescue here because since it's not limited to an index, but based on screeners overlaying the index, you can pick and choose the strategy you prefer, whether value or momentum or low volatility. However, the name 'smart beta' can be somewhat misleading because despite the academic rigour that backs factor investing, these strategies, no matter how good can always lag the market and for extended periods at that. And that's what most smart beta product creators don't tell you. Have you ever seen a product brochure that shows it in anything other than a good light? 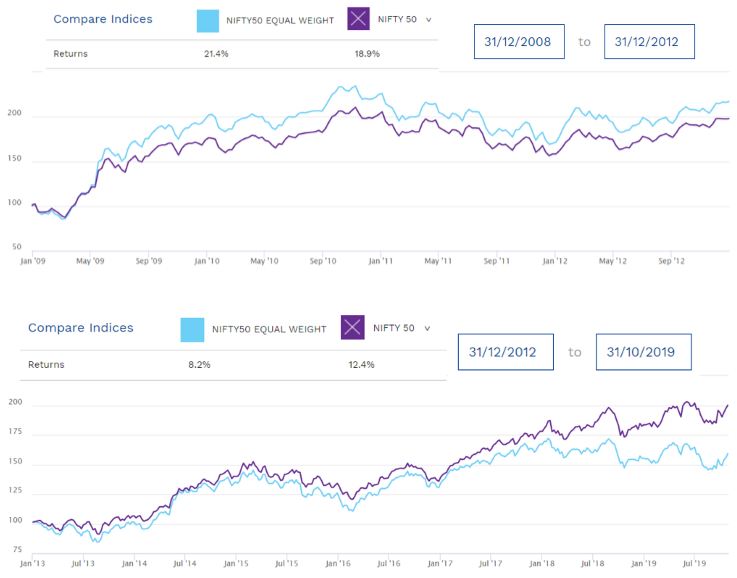 These charts show the relationship between the Nifty 50 Index and the 'smarter' Nifty Equal Weighted Index (where all 50 constituents have an equal 2 percent weight) during two different time periods. If by seeing the data from 2009-2012 you would have been convinced of equal weighting, the period from then until the end of October 2019 would've left you tearing at your hair due to its underperformance.

A similar pattern emerges when you look at the performance of the various Nifty factor indices or as they call it, the strategy indices And that's when the age-old issue of investors trying to time the market again crops up as it's easy to jump in and out of strategies if you don't see one working. As an article by Schroder's said, 'turning value into a pure factor rather than a portfolio of underlying companies leaves investors more opportunity to focus on timing–to buy in and sell out when they judge the moment to be right–and, that is not their strongest suit. You could always diversify among multiple strategies but then again, won't you just be buying the index?

As we jump from active to smart, possibly skipping passive entirely, investors should take heed of these factors too. Investors who don't understand these nuances and jump on the smart beta bandwagon could be left disappointed. And it's up to the manufacturers of such products and financial advisors to ensure that the risks are communicated effectively as well. Just because it's called smart does not mean that it's a smart product for you.

As smart beta funds get marketed and trumpeted, keep a few things in mind:

While we can turn to Towers Watson for coining the term 'smart beta', I for one would rather have it be called by another name – modified beta or even modified index. At least that way it seems to be less misleading.

The writer is, Co-Founder of Investography, a financial wellness company based in Bengaluru. He can be reached at nithin@investography.in.

Fund managers: The mystery of the vanishing alpha. Read Part 1 & 2 of this series here

2,547
Thank you for your comment, we value your opinion and the time you took to write to us!

Tweets by @forbes_india
Prev
Fund managers: The mystery of the vanishing alpha
Next
Lessons from turning points in wealth management over the past decade