The Stories Behind Blackstone's Stephen Schwarzman's New Book, 'What it Takes'

Schwarzman’s autobiography has lessons for entrepreneurs and investors, including how to deal with extreme rejection, written from first-hand experience

Author: Stephen A Schwarzman, chairman, CEO and co-founder of BlackstoneBook: What It Takes

“I want to be a telephone switchboard,” says Stephen Schwarzman, chairman, CEO and co-founder of private equity giant Blackstone Group, in his autobiography, What It Takes. Millennials in this era might wonder what telephone switchboards are. Back in the day, they were designed to take in huge amount of data and re-route information in an organised way (think old movies on wars where women would plug wires into different switches, relaying messages).

Schwarzman tells Forbes India, “I like to think that my mind has worked in a similar fashion. I had the ability to see patterns and connect the dots. This was my idea of how I would build a career at 21, and I am still doing this 50 years later,” Scharwzman says.

At 72, Schwarzman still sits through the weekly Monday meetings at 8.30 am IST, when all Blackstone offices across geographies spend an hour discussing private equity, real estate and credit.

The reason for writing an autobiography was simple, Schwarzman tells me. A few years ago, he had to go in for a five-minute courtesy meeting, which turned into a 2.5 hour-conversation. The person on the other end began to ask Schwarzman questions about how he should think about his job, how to make his pool of capital do better and how Blackstone goes about doing things. He wanted to know how to look at investing in different areas because he wanted to achieve ‘Blackstone type of results’.

So, Schwarzman decided he could write a book and share the knowledge he had with everyone. “Then I don’t have to spend 2.5 hours talking to each of them,” he laughs. “This would be more efficient.” 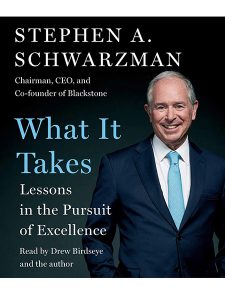 The book details his life story—from growing up in Philadelphia, to going to Harvard Business School and almost deciding to quit; then insisting to be paid $10,500 dollars at his first job at DLJ, after he left business school. He also discusses his mother’s influence in his life, his philanthropic endeavors and his love for music.

What it Takes also touches upon the 80s era of leveraged buyouts, Schwarzman’s first investment banking deal, and successfully closing his $488 million deal at age 30, sealing a promotion to partner at Lehman Brothers. The financial crisis of 2008 is detailed too, and how his wife insisted he should call Hank Paulson before coming home.

On the first day, they sent out some 400 emails to friends and old clients announcing their firm; while the phones kept ringing to offer congratulatory messages, no one was deploying capital. This is not what Schwarzman was hoping for.

“As investors, we did not have any direct experience, so it was very difficult. No one wanted to see us. In fact, we had commitments from only two firms, and those were contingent of us raising $500 million; the money we had from those two was in total $75 million. With nothing else, it was almost equivalent to raising nothing,” Schwarzman recalls.

The 18th firm they met turned out to be the lucky charm: Prudential, one of the largest insurance firms in the 1980s, was also one of the largest deployers of capital in private equity. Over a tuna sandwich-lunch at Prudential’s New Jersey office, the fund manager wrote them a cheque of $100 million. That’s when Schwarzman knew there won’t be any looking back.

“In 1986, $100 million was a huge number. When they backed us, other people came in—it was their credibility rather than ours that helped us raise $850 million, the largest first-time fund in history, and the third biggest in the world. Without Prudential’s support, that never would have happened,” Schwarzman says.

The book has lessons for those starting afresh too.

“Every normal person doubts themselves at some point, but you just have to get over it and pick yourself up. During the fund raise, we got just one investor for every 17 we approached, so you can imagine the rejection we felt,” he says. “In many cases, this was by people we knew and knew well—it was very defeating, but you just have to keep going. We got through it, of course, but there’s a psychological pain you sustain when you start something. When you think the world is ready for you but it isn’t—this journey is part of what it takes to be successful.”

🔊 Listen to the detailed conversation here

5,459
Thank you for your comment, we value your opinion and the time you took to write to us!

Tweets by @forbesindia
Next
Trucking through India: Stories of sex, drugs and the highway economy