Indians are protein deficient, and it needs immediate attention

A nation needs to have a strong foundation and with high quality and quantity of proteins in a balanced diet, India can favourably enhance its chances of staying healthy

Shweta Khandelwal is the Senior Research Scientist and Associate Professor at PHFI & Mr. Ajay Kavishwar is the Director for Planning, PR & Advocacy, at The Akshaya Patra Foundation. 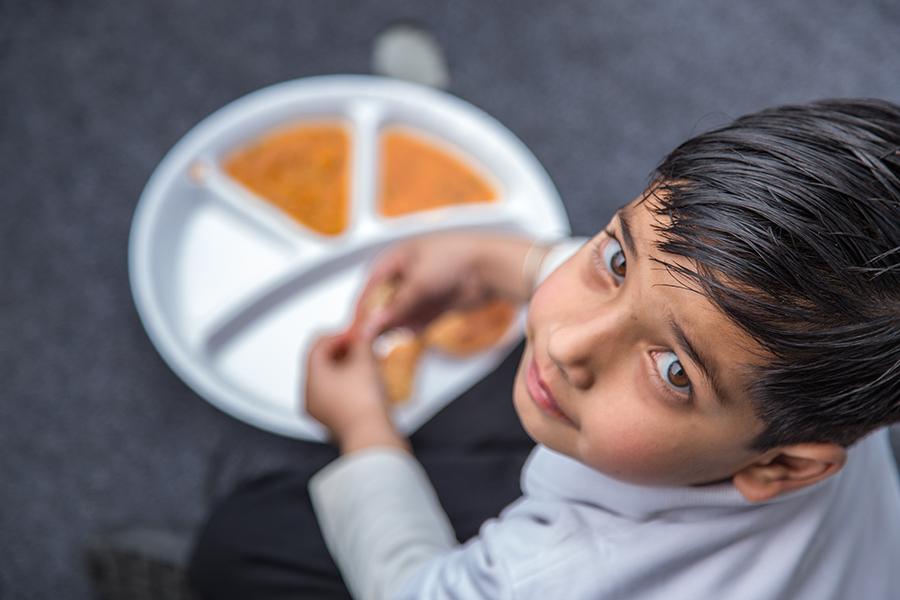 Nutrition is one of the key pillars of sound physical health and cognitive abilities. It is widely believed that 'we are what we eat'. On an average, in India the consumption of foods per capita per day is 1.317 kg, which is 2,458 calories. In India, people consume starchy diets which are rich in carbohydrates. This constitutes approximately 70-80 percent of their diet.

Proteins—which are equally important nutrients—are also sourced from carbohydrate-rich foods, because of its excess in regular diets. Actual protein sources such as dairy products, animal foods, and pulses are consumed in a comparatively limited quantity by Indians.

The Indian Market Research Bureau’s 2017 report states that protein deficiency among Indians stands at more than 80 percent, measured against the recommended 60g per day. The usual sources of proteins in a regular diet—one cup of lentils, 1 glass of milk, or 1 cup (200 g) of yoghurt—contain 7-8 grams of protein.

To get to the daily requirement of 60g protein every day, it would be necessary to eat eight bowls of lentils or drink 7-8 glasses of milk. A mixed diet can meet the protein requirements of children, provided that the protein content of the foods is such that it contributes to around 10 percent of the total calories.

In the 1950s and 1960s, international organisations were focused on protein malnutrition among children in developing countries like India. The emphasis gradually shifted from proteins to micronutrient malnutrition in the 1970s; the assumption being that the latter was a more severe issue and most children received adequate protein. There is now an urgent need to reassess this assumption, as evidence suggests that protein deficiencies continue to persist among large sections of the population.

In urban areas, beverages, refreshments and processed foods account for the highest monthly expenditure, while the same position is occupied by cereals in rural households. This trend was further confirmed by a more recent Indian Consumer Market 2020 report which suggests that we spend only one-third of our food budget on protein-rich foods.

One factor which possibly affects people’s access to a balanced meal could be that healthy foods are costly. The Global Panel on Agriculture, Food Systems and Nutrition Report (2017) shows that achieving even one of the nutritional recommendations such as five fruits and vegetables per day (400g), would mean an expenditure of about 52 percent of the household income in countries like India and Bangladesh.

The establishment of sustainable access to good quality and quantity of protein in the country, especially during critical periods of child development, could aid in addressing this concern.

Government programmes such as Integrated Child Development Services (ICDS) and the Mid-Day Meal (MDM) Scheme provide ration and nutritious meals to susceptible populations. These include mandates on protein in the overall composition of the programmes—20-30g of pulses per day (Refer: Table 1). These nutrition security programmes are one of the key means to secure adequate proteins for their beneficiaries through various food groups. 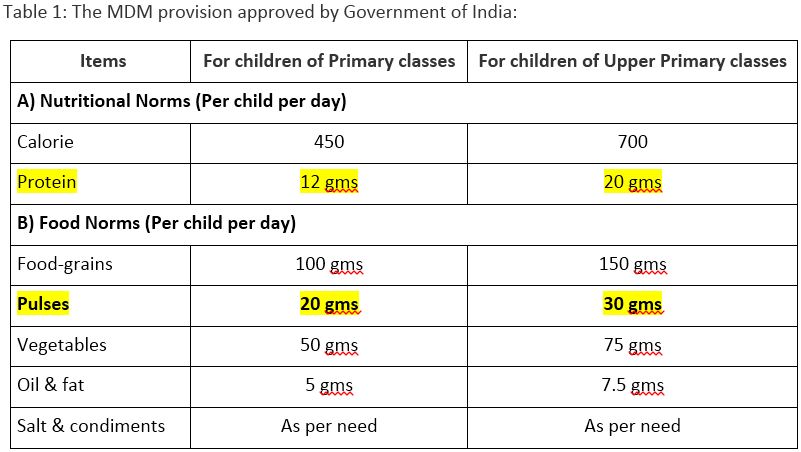 Protein intake during the first thousand days (from conception to two years of age) has lifelong implications. More than 25 percent of this crucial stage is spent in utero. Children need good quality and quantity of proteins to develop in the pre-natal and post-natal stages. Child stunting in early life is associated with low circulation of essential amino acids in the body. A recent Cochrane review (2015) provides encouraging evidence that antenatal nutritional education, with the aim of increasing energy and protein intake among expecting mothers, appears to be effective in reducing the risk of preterm birth, low birth weight, increasing head circumference at birth, and increasing birth weight among undernourished women.

The World Health Organisation (WHO, 2007) estimates that the need for protein in the third trimester of pregnancy is significantly higher (31g more) than in previous stages. There is a link between the composition of the mother’s diet and the birth outcomes. Consumption of a high percentage of energy from protein in early pregnancy is positively and significantly associated with birth weight and placental weight, even after adjusting for several confounders such as maternal age and parity.

There are many perceptions about food and eating habits, especially during the stages of pregnancy and childhood. The nutritional damages done during these stages are largely irreversible. It is therefore crucial to strive to provide proper nutrition to children, so that they grow up to be healthy and productive citizens of this nation. One of the ways to devise an inexpensive well-balanced diet for the children in India is by using a judicious mixture of different food groups; for instance, adding good quality cereals and pulses to their diet in a ratio of 5:1 to 5:3.

Another important factor we are increasingly bound to consider while discussing nutrition is the impact of climate change and pollution on nutrition. Evidence points out that nutrient depletion and reduction in yields are and will remain ensuing repercussions of climate change. Between 1993-94 and 2011-12, protein levels in beans/ legumes dropped approximately 60 percent and in brown lentil (whole) by 10 percent.

Collaborations among relevant sectors such as public health nutrition, agriculture and environment, and human resources can bring about solutions and strategies to tackle the same.

Concerted efforts to change our food systems need to be made. Currently, they are offering quick options to satiate hunger in the form of ultra-processed foods with lots of empty calories and minimal nutrition. Children and their caregivers indulge in foods high in bad fats (trans and saturated), salt, and sugar without realising that this is an addictive behavior and is prompting them to acquire risk factors for early development of non-communicable diseases.

Based on the right information, the demand and supply within our food systems must undergo change in order to increase and encourage consumption of healthy foods. Since proteins are the building blocks for the growth and development of children, we must make a conscious effort to choose our food sources wisely and spread the knowledge of healthy eating among children as well. A nation needs to have a strong foundation and with high quality and quantity of proteins in a balanced diet, India can favourably enhance its chances of staying healthy.

Shweta Khandelwal is the Senior Research Scientist and Associate Professor at PHFI & Mr. Ajay Kavishwar is the Director for Planning, PR & Advocacy at The Akshaya Patra Foundation.

48,990
Thank you for your comment, we value your opinion and the time you took to write to us!