Gagan Narang Feels Medal Could Have Had a Better Hue

Pain has eased, but Narang feels medal could have had a better hue 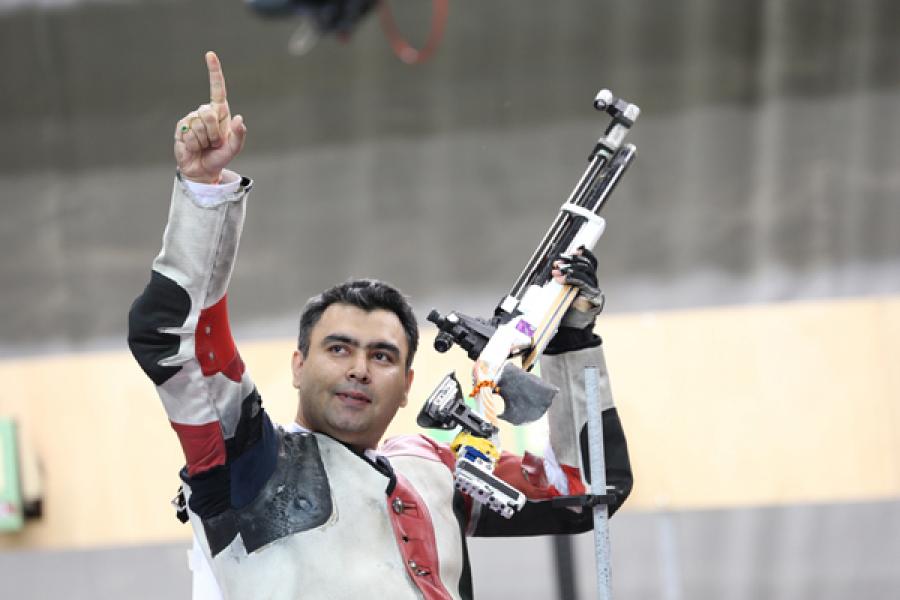 London, July 30: The pain and anguish Gagan Narang seemed to be living with for the past eight years seemed to have eased, but not fully gone, even after the Olympic bronze medal at the 10m Air Rifle final at the Royal Artillery Barracks on Monday.

Just as his final shot punched a hole on the target board and it showed 10.7 – yes, they can score more than 10 in the shooting final – the 29-year-old Narang allowed himself a minor fist pump. These guys are great at mental maths even while trying to maintain their balance in suits so heavy that they are forced to walk in a robotic-manner and resemble astronauts. Narang, till then a picture of extreme concentration, relaxed just that bit, for he knew he had booked a berth on the podium.

''It is like a huge stone is off my chest. I had not managed to qualify for the finals in the last two Olympics and that was really painful, But now I am happy to have finally won an Olympic medal"' Gagan, who in Beijing, missed out on getting into the finals on a countback, while Bindra made the finals and then went all the way to the gold.

But he also added, “I am not really happy. My coach is also not happy with the score. Scoring 600 is always challenging, but I made a few technical mistakes at certain points. But then an Olympic medal is an Olympic medal.”

A huge stone off the chest – well the same could  be said of the Indian crowd, too, which erupted into a huge applause when Narang was assured of a berth in the final.

A little earlier there were sighs of disappointment as defending champion Abhinav Bindra managed only 97 and failed to make the finals. Bindra was very much in the race to get into the final till the very last set. Till then he shot two 100s and three 99s and may well have got into a play-off for the seventh and eighth places as the last score getting into top-8 was 597. But Bindra lost his concentration somewhere and uncharacteristically shot 97 in the last set. His final score of 594 saw him tumble to 16th place.

Indians made up more than 60 % of 4,000-odd people that the small Hall can accommodate for the qualifying round of 60 shots.

Narang, the very last to begin his quota of 60 shots in the Qualification round, took his time for each shot and it was not till his 37th shot that he managed less than perfection. His first 26 fetched 10s and then the 27th and 30th were 9s.

With just two points separating the eight finalists, the final round was a see-saw with the positions changing after each shot. However, Moldoveanu and Campriani stayed in the top three through the final. Narang dropped to fourth only once – after the second shot of 9.7 – but also rose to second once after the sixth shot at which point he was just 0.3 behind the then-leader, Campriani, whose ninth shot of 9.4 dropped him to silver.

Just to illustrate how small the difference is at that level, Ole Magnus Bakken of Norway made no mistake for the first 50 shots in qualification. And then like Bindra managed only a 97 in the sixth and final set. But he squeezed into the finals, where he was last. One of his shots was so off the target that it fetched him just 6.6 and he ended eighth from among eight finalists.

Back to the crowd applause, which is not common feature at shooting finals, where silence is the golden rule.

The Indians fans forgot there were other shooters, too. They clapped each time Narang shot 10s in the qualifiers and again in the final. The others, including the gold and silver medallists, seemed to have been forgotten.

Not done, you might say, but what the hell, India does not win medals as often as Romania and Italy do. Remember Nadia Comaneci? She alone won five gold, three silver and one bronze in two Olympics, while all of India has nine gold, two silver and seven bronze before Narang added one more bronze on Monday.

At the press conference of the medallists, Indians outnumbered the Rest  of the World 30-5 or something like that. So, gold medallist Ali George Moldoveanu of Romania and silver medallist Italy’s Niccolo Campriani must have even wondered if they had wandered into the wrong press conference.

Question after question came for Gagan, who said he was not really satisfied with his performance and should have returned with a better score. Gagan-speak: “I don’t know what (about celebrations) is happening back home. I am trying to stay focussed for my two other events.

"It [missing the Beijing final] has been vindicated. In Beijing, I missed going to the finals due to a technicality."

"I think only a little credit goes out to me but my parents and sponsors have put in a lot of hard work which paid off."

"The pressure was immense. I shot two nines today. I could have done better. But I am happy with my medal. It means a lot to a lot of people who have worked for this."

Bindra-speak
''It was simply not my day. I started slowly and could not build it up. There was a lot of pressure on me. It was an up and down day for me.”

"I have had a nice journey, so not thinking of that [retirement]. The journey has been good till now. I had worked hard for the Olympics, but unfortunately  it did go my way.''

Did you know…
• The original venue for shooting was to be the National Shooting Centre in Bisley, Surrey. But the IOC expressed reservations about the number of sports outside London, so a new centre was made.

•  The budget for the Royal Artillery Barracks is £18 million. After the Olympics and Paralympics the temporary shooting hall will be reassembled elsewhere in the UK.

• In the final, where the perfect score of 10.9 and mere 10s are followed by sighs of disappointment, only one perfect score was achieved: by Peter Hellenbrand, who ultimately ended fifth.

7,375
Thank you for your comment, we value your opinion and the time you took to write to us!

Tweets by @forbesindia
Prev
How Stratford got ready for the London 2012 Games: A photo blog
Next
Karmakar joins a club few want to join: the 4th place club