At $1, this Diarrhoea Vaccine Paves Way for Social Innovation

After nearly 25 years of work involving multi-institution, multi-country collaboration, India yesterday announced its first locally developed anti-diarrhoea vaccine. Effective against a strain of Rotavirus that causes severe diarrhoea among children under five in India, this vaccine is one of the emerging examples which show how the world in general, and India in particular, needs a different model for developing new therapies. The old model - of pharma companies deciding what and when to develop new drugs – is crumbling.

Bharat Biotech, which owns the intellectual property in Rotavac, has been the industry partner right from the beginning. It has priced the vaccine at $1, a fraction of what the existing Rotavius vaccines in the market today cost. In India GSK and Merck (MSD) sell their brands at upwards of Rs 2000 per course.

But Bharat Biotech isn’t engaged in charity here. Its founder-chairman and managing director Krishna M Ella says his company would make profits even after selling the vaccine at $1. Why? Because of its business philosophy and the fact that it has not invested in basic research and clinical trials. Those investments have come from various partners. Of the nearly Rs 300 crores of investment, Bharat Biotech has put in Rs 65 crores, mostly for setting up manufacturing facilities. A lot of expertise and rest of the investment have come from the Department of Biotechnology, All India Institute of Medical Sciences, National Institute of Immunology and a bunch of other Indian centres. Among the international collaborators are the National Institutes of Health and Centres for Disease Control in the US and global charities like Bill & Melinda Gates Foundation and PATH.

The full story of how the strain was discovered by former DBT secretary Dr MK Bhan, then a pediatrician at AIIMS; how the project evolved across countries; and what the clinical results are can be found here. (This URL is itself a good start by DBT in communicating with one and all.)

It’s the first time that any government agency has funded the entire process of a drug or vaccine development — from basic research to clinical trials. Prior to this India had never done the full efficacy trial of any molecule. Unarguably, DBT would like to make a larger point with this success. “This initiative could well have failed. Unless we embark on such long routes and have the ability to stay the course, we won’t achieve such goals,” says the newly appointed secretary K Vijayraghavan. 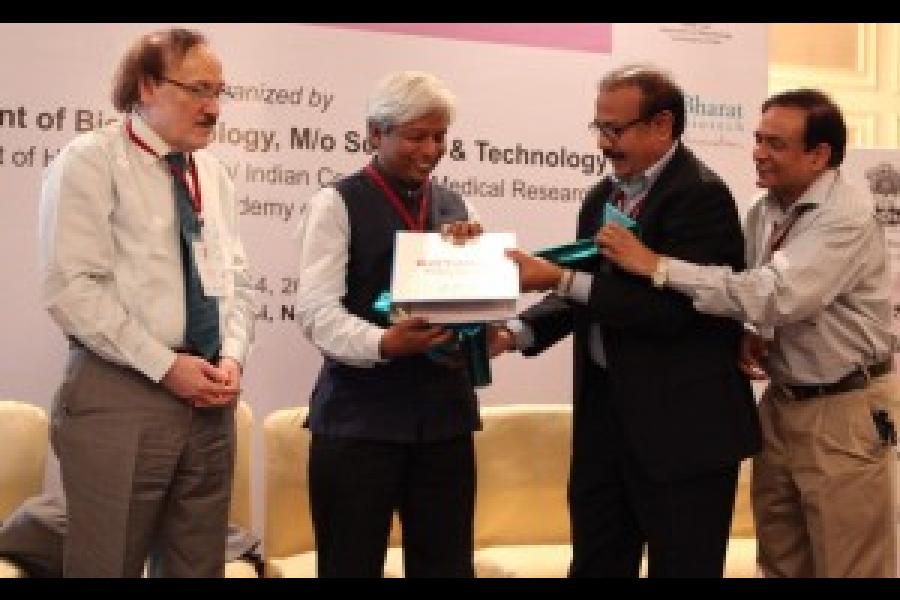 DBT has a raft of similar programmes in the works where it is trying out different partnerships and funding models in vaccines for malaria, HIV-AIDS, TB and Japanese Encephalitis. Bharat Biotech, on its part, is planning to go back to the government for collaboration on late stage clinical trials of Chikungunya vaccine.

But can the government and charities have similar collaborations for new drug development?

Of course, by bringing the same partnership and funding methods, says Vijayraghavan. The challenge though lies in IP sharing. “Bharat Biotech has been exceptional. They've chosen this model…other companies need to be persuaded to think about affordable care,” he says.

Krishna  Ella believes this can be replicated in drug discovery, “as long as companies are truthful in partnership. “Many times the industry looks to the public sector [only to get]  money,” he says.

Government agencies, be it DBT or other funding agencies like the Indian Council of Medical Research, would have to take calls on which molecules to back, therapeutics where they get maximum bang for their buck. The Rotavac trials (excluding salaries) cost nearly Rs 100 crore.

Bharat Biotech plans to sell this vaccine in other parts of the world once it is approved in India. It will submit its dossier to the Indian regulator, Drug Controller General of India, in July. Rotavirus kills at least 100,000 children every year, being the third largest infant killer in India.

Amidst this celebration, the larger question that Indian research centres and funding agencies should be asking is how do we use this experience and success to create a mechanism to address India’s public health deficits? Perhaps create a funding corpus and an executive body to coordinate and sponsor a handful of drug development programs. Other countries are doing the same. Innovative Medicines Initiative of Europe acts a neutral third party building bridges between universities and industry. It has created a platform for drug discovery called the European Lead Factory.

In the US, the new National Centre for Advancing Translational Sciences is trying to do something similar so that it advances its own research to an extent that the industry finds lucrative enough to lap it up.

The global drug productivity crisis – from a peak of 50-60 new molecules/year in mid 1990s to about 20 molecules today —presents an opportunity, particularly to universities. They can train a new cadre of researchers who straddle both academia and industry.

Rotavac also provides a good model for new entrepreneurs, says Ella, for this is “a sector where nothing happens in less than 10 years.” Though he promises that the next vaccine won’t take 10 years.

3,525
Thank you for your comment, we value your opinion and the time you took to write to us!

Tweets by @forbes_india
Prev
Pain! What Pain?
Next
It's not just Ranbaxy, our health care regulators have failed us too