In last couple of years, the number of running groups and events have mushroomed in India. Ironically, they have increased by a far higher percentage than number of runners themselves. It’s because most of them are jumping on the bandwagon, whether they understand running or not. In all this, it’s at times difficult to find the original trail blazers. 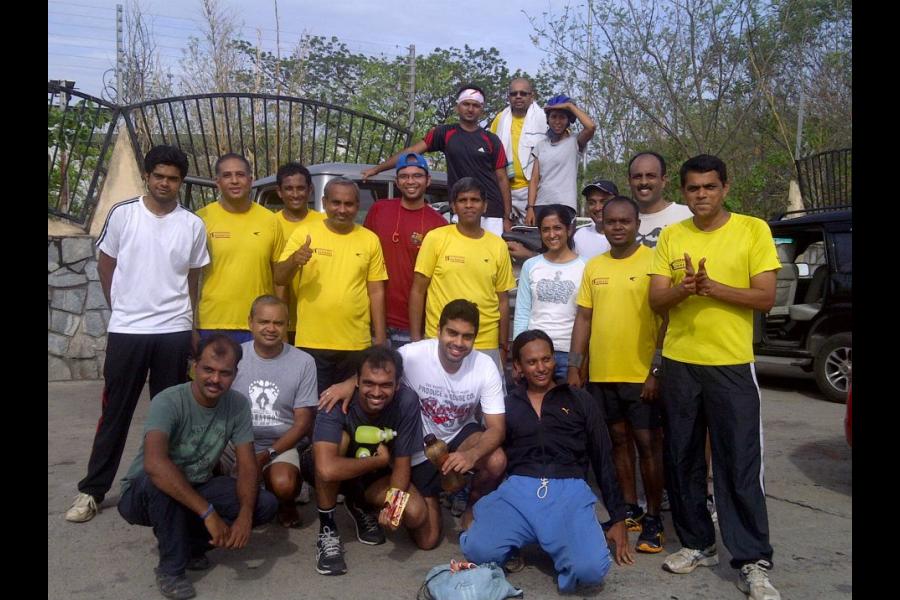 A couple of Sunday’s back, I had an opportunity to run with one of the original guys, Rajesh Vetcha, a very private runner-activist from Hyderabad, an unsung hero of running movement in India. He’s by no means an Usain Bolt when he runs, but he keeps at it like a snail, always moving but always thinking with his feet, rather than only on feet, about a far bigger movement.

Rajesh rightly believes that running is the most preferred form of physical fitness, so just get up and go, but the longest mile is from bed to the bathroom. He is very focused on getting that bit right.

He was an active kid in school and college. In 2002, he moved from hot and humid Chennai to cool Bangalore for a new job which was as sedentary as it can get. In a short span of 13 months, inspite of being a strict vegetarian and eating ‘healthy’ food, his weight jumped from 77 kgs to 99 kgs. One day while playing table tennis with his colleagues, he realised how uncomfortable he was simply moving around. On checking his weight, he was shocked. He joined the aerobic classes in the near-by gym. Soon he was running on the treadmill. In 3 months, he was able to reduce his weight back to 85 kgs.

This personal experience with the most primal form of movement, reminded him of 1984 LA Olympics, which had left a life-long impression on Rajesh. These Olympics were being telecast for the very first time on television in India. In those good old days, the last event just before the closing ceremony used to be the men’s marathon. Women's marathon was introduced for the first time in LA . Gabriela Andersen-Schiess from Switzerland was only 400 m short of the finish line, but suddenly her limbs stiffened, almost seeming to Rajesh, as well to the commentator, that she was having a paralytic attack and was going to die. But she limp-crawled her way to the finish, taking almost 6 minutes. The whole stadium cheered every step of hers, as if she had broken the world record. It instilled in Rajesh that running just wasn’t about winning, it was more about participation and finishing what one had set out to do irrespective of the odds.

In 2004, he did a half marathon during training, where he managed to lose all his toe nails. He needed help to get better at running, but had no one to go to in Bangalore, so he joined a running group on internet. A British lady, a runner and a nurse, started to e-coach him for Mumbai Marathon 2005, which he ended up doing in 5 hours 36 minutes. In total there would have been less that 150 runners (~110 in under 5 hours) who would have finished the full marathon, but the signage, water stations and organizers only waited for 5 hours. The ones who needed most help, were left to their own devices. That, in itself, is against the spirit of marathon running. He asked people all along the way for directions to the finish line.

It was on 3rd Sunday of February 2005 that he called for the first marathon meet-up in the country for which 20 odd runners showed up just outside Cafe Coffee Day, CMH Road, in Indiranagar, Bangalore. This group was called Bangalore Runners but no formal group was made and it was a group of individuals who were getting to help each other in achieving their running goals.

Rajesh moved to Delhi in 2006 and started Delhi Marathon Runners Group from Lajpat Nagar, which originally only had 15-20 runners. A year later, he moved to Hyderabad and formed Hyderabad Running Group, effectively making a far bigger contribution to running.

In November 2007, he ran New York City marathon, which introduced him to true spirit of marathon running which cut across sex, caste, creed, colour, nationality etc. Contrary to what everyone had told him about immigration in US, he was welcomed by the officers at the airport once he told them he had come all the way for the marathon. He had a first hand experienced to how well marathons could be organized. The local running groups owned and organized the marathon, in collaboration with the city. Over a million people were out cheering the runners to carry on, no matter how slow. It was an event which could foster good relations amongst the residents of the city of NY.

He came back from NYC marathon, as a man on a mission. The marathon organisers in India definitely didn’t understand what running was all about and the needs of the runners. Even today, most of the marathons organized are by event management companies which mostly organize weddings, dandiyas and other social functions. It is not that they are not fit to organise marathons but their perspective of organising events like marathons was seen through the lens of the other events which they were doing.

Runners repeatedly complain about race organizers doing a pathetic job. Rajesh after the experience of running very well organised marathons overseas believed that a similar experience had to be created in India. He believed that then the solution is for the runners to come together and organize their own events, which caters best to their needs, as event organizers have interest in everything else, but runners. If runners wanted to make these events better, they needed to become a part of the movement. He was not only ready to take that leap, but convince others to join in him in this movement.

In 2008, just before the new Hyderabad airport was open, he organised a run on the runway of the to be opened airport at Shamshabad. 180 runners showed up for it. By now he was getting runners from his group to travel to various marathons around the country. In November 2010, 21 members of Hyderbad Runners travelled for Athens marathons in Greece. He was now clear that Hyderabad needed to host its own marathon. Hyderabad Runners, the organisers of Hyderabad marathon, a marathon truly of the runners, by the runners and for the runners.

In 2011, Hyderabad Runners, organized the very first city marathon in India by a runner's group, arguably India’s best marathon (based on runner's feedback), which falls on the last Sunday of August every year (this year, it is on 25th August 2013). It is a marathon truly of the runners, by the runners and for the runners. It’s a non-profit organization only meant for growth of this infectious movement.

These numbers are very small if it’s a movement we are after, but there needs to be a start, and Rajesh has made that happen. But he understands, if the intention is to make the whole country become healthier, this needs to start with school kids as they are most impressionable and would stick to a habit instilled early on in life. In 2007 New York Road Runners (NYRR) started Mighty Milers Program, with the objective of introducing school kids to the benefits of running. NYRR is the largest running group in the world with over 70,000 paid members and organise more than 20 events every year including the prestigious New York Marathon. Mighty Milers has around 1.4 lakh kids across 600 schools in USA.

Rajesh realised that India needed a well structured, goal oriented school running programme. After prolonged discussions with NYRR, finally in May 2012, Hyderabad Runners collaborated with Mighty Milers with the vision to get the school kids across India to pick up running for life. For the first time, NYRR actually collaborated. They organized pilot project involving 6 schools in and around Hyderabad with 281 kids.

The larger aim of this project has been to keep kids active for life, they needed to be introduced to running and its benefits in the very formative years, so it can become way of life. This has ended up having a reverse effect on parents as well. The kids have motivated their parents to become a lot more active. In any case, if the kids want to pick up any sport like football, tennis or cricket, running is very basic necessity.

Hyderabad Runners Group is a not-for-profit organization with no full time employees. It organizes 4-5 weekly runs, throughout the year, in and around the city of Hyderabad. All these runs culminate with the Hyderabad Marathon. They also organize an annual evening for members. Throughout the year, they invite guest speakers for motivational talks, organize book launch and screening of films on running. Several corporates and institutions including Wipro, Deloitte, University of Hyderabad have taken their help to organize running events in the city of Hyderabad.

Hyderabad Runners group has become a model running group in India, mentoring small running groups across India, with no vested interest besides making more people run. Rajesh believes that running needs to be structured better and be institutionalized such that 50,000 - 60,000 paid members are in there in a few years time.

It all might sound like only a dream, but Rajesh has set himself some very high targets and he is achieving a lot more than that. Kudos.

10,395
Thank you for your comment, we value your opinion and the time you took to write to us!

Tweets by @forbesindia
Prev
It's not just Ranbaxy, our health care regulators have failed us too
Next
Seaweed Magic: What if a pinch could replace dietary supplements?