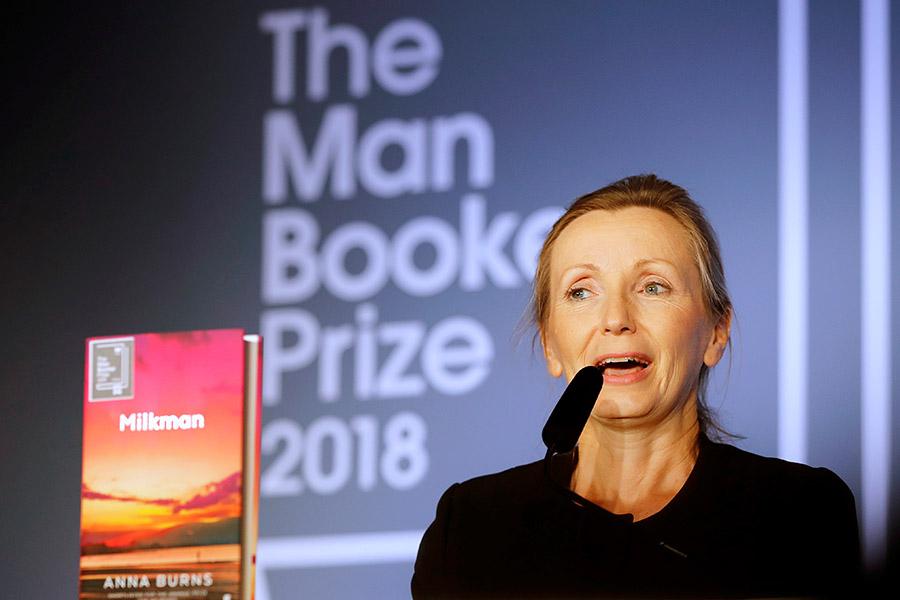 Writer Anna Burns delivers a speech after she was presented with the Man Booker Prize for Fiction 2018 by Britain's Camilla, the Duchess of Cornwall during the prize's 50th year at the Guildhall in London, Britain, October 16, 2018; Image: Frank Augstein/Pool via Reuters

Milkman, the dystopian novel is a brilliant exposition of the difficulties faced by the 18-year-old unnamed narrator which includes the continuous sexual coercion by a much older married paramilitary, identified as ‘Milkman’, during the political strife in Northern Ireland. The novel successfully portrays an intense picture of a community under siege.

Author Anna Burns was recently awarded the Man Booker Prize for Fiction 2018 in the prize's 50th year in London. The prestigious literary award comes at an important turning point in the world, with the growing relevance of the #MeToo campaign, which has given a voice and words to innumerable victims of sexual harassment. It can even be called a revolution, which highlights a dystopian world that is as much a reality today that it was in war-torn society of the 1970s that the novel is apparently set in.

The first sentence of the novel indicates its uniqueness. ‘The day Somebody McSomebody put a gun to my breast and called me a cat and threatened to shoot me, was the same day the Milkman died." The novel is boldly different in many aspects. None of the characters have a name. Even the narrator-protagonist, who is an eighteen-year-old girl, is only known as ‘middle sister’ who is continuously stalked by a 41-year-old married man. The milkman doesn’t deliver milk but is in fact a paramilitary leader who is against the army. It is probably set in the 1970s during the prolonged conflict in Northern Ireland, and the unnamed city is probably Belfast. The city is full of sectarian tensions and her community is among the ‘renouncers’. The narrator is a book-loving young lady who is growing up in the midst of gun play and bombs.

The society is bitterly divided into nationalists and unionists. The dark novel contains numerous instances detailing them. “The right butter. The wrong butter. The tea of allegiance. The tea of betrayal. There were ‘our shops’ and ‘their shops’. Placenames. What school you went to. What prayers you said. What hymns you sang. How you pronounced your ‘haitch’ or ‘aitch’.”

The novel is replete with unwelcome encounters. In a particular encounter, the narrator fails to understand where the predator suddenly appears from. The narrator is continuously stalked by the milkman. He would suddenly appear and start running beside her in the park and start conversing with her, knowing well that she was already had a boyfriend and was not interested in him at all. The predator is seen using family connections and political power to coerce the narrator. She says, "I did not like the milkman and had been frightened and confused by his pursuing and having an affair with me." Inspite the fact that she didn't show any interest in the crook, rumours start circulating in the tight-knit society which further exacerbated her problems.

The helplessness of the narrator in fending off the vicious attempts of the sexual harasser has been detailed. He uses his power in such a society to continue harassing the lady. “I knew by this second meeting that the milkman was attracted to me, that he was making some move on me. I knew I didn’t like him being attracted and that I did not feel the same way towards him myself.”

The society also considers male and female as unequal. Girls are subjugated to males. Women’s movements are restricted. “This was certain, girls not being tolerated if it was deemed they did not defer to males, did not acknowledge the superiority of males, might even go so far as almost to contradict males, basically, the female wayward, a species insolent and far too sure of herself.”

The narrator discusses the issue of sexual abuse in such war-torn disturbed societies. It depicts how she is not even sure whether the stalking by the predator is right or wrong. Whether her dislike is justified? Are unwanted conversations by the delinquent innocent? What to complain? Who to complain? “At the time, age 18, having been brought up in a hair-trigger society, where the ground rules were – if no physically violent touch was being laid upon you, and no outright verbal insults were being levelled at you, and no taunting looks in the vicinity either, then nothing was happening, so how could you be under attack from something that wasn’t happening?”

The milkman is not the only person who molests the narrator. Her first brother-in-law also regularly passes lewd remarks against her which even the protagonist fails to understand. He also makes disgusting remarks about her and her habits. Strangely, what gives him pleasure is her inability to understand those words. “He never made his comments when my sister was in room. Always, whenever she’d leave the room, it was a switch turned on inside him.”

Difficult themes such as dangers of a totalitarian state are brilliantly displayed in this work. The author has been successful in portraying the insecurity prevailing in the mind of a young lady in such divided society. “But by now, by age eighteen, ‘smiling, friendly and obliging’ always had me straight on the alert.”

4,433
Thank you for your comment, we value your opinion and the time you took to write to us!

Tweets by @forbes_india
Prev
Mergers and Acquisitions: Outlook in India for 2018
Next
Driving change towards a citizen-centric legal system