A Day in the Life

What’s going on in the heads of a certain set of people at the frontlines of the coronavirus lockdown—the men and women running those teeny kirana stores and chemists, so ubiquitous even in the big cities? 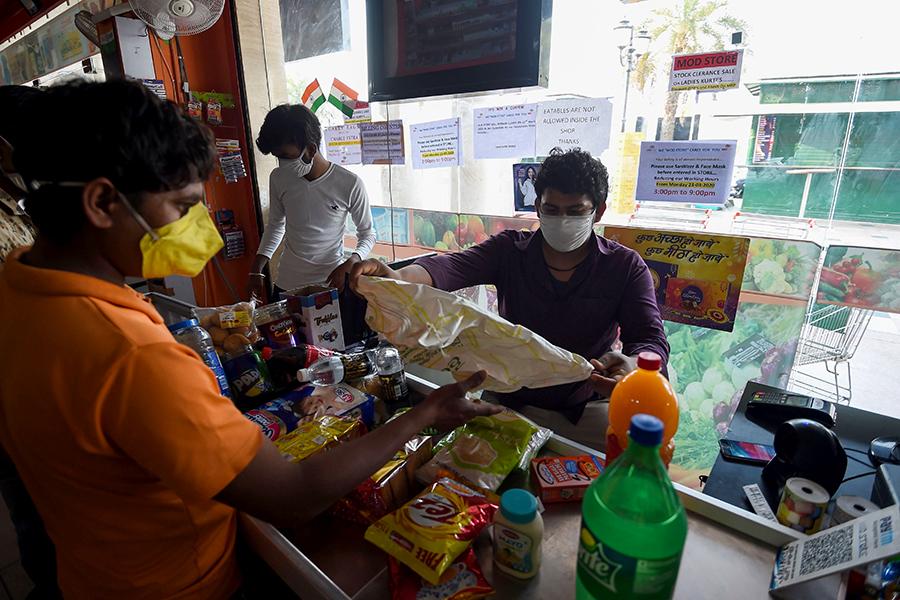 It’s difficult to say something that hasn’t already been said about an event so unprecedented. Or to use adjectives, metaphors, analogies that haven’t been exhausted. Or to tell a story that hasn’t been told yet—daily wagers making the long walk home, shanty dwellers who’d rather take their chances than be confined with eight others in a 8x8 room, and the panic-stricken city-slicker who is panic-stricken not because of fears of infection, but at the thought of having to do the dishes and mop the floor.

Perhaps the city-slicker’s story hasn’t yet been told, but let’s instead try and explore what’s going on in the heads of a certain set of people at the frontlines—the men and women running those teeny kirana stores and chemists that are so ubiquitous even in the big cities.

Walk into the hole-in-the-wall that is the friendly-neighbourhood grocery store, and in it are three sales boys, one cashier and four customers in a hurry. It’s not only the buyers who are making haste. The sales guys too want to make it quick. They avoid your gaze, almost as if they’re lowering the odds of contraction by avoiding eye contact. They just hear out your order and, like a robot on Red Bull, rush to the shelves, yank out the avocado peppers, buns, bagels and breadsticks—the ‘essentials’ you asked for—and dump them in front of the cashier, who wastes little time in getting the register to ring. And you—inches away from three other twitchy customers—peel rubber and exit the store. You pull down the mask and breathe in the air. You’ve survived for now.

The guys in the store aren’t as lucky. Not yet. They’ve been in there from 8 in the morning. It’s 5 pm now. They’ll be there well past sundown. In a day, they would have close to 600 customers walking in over 12 hours, at a rate of almost 50 per hour, or four every five minutes. That’s a lot of people. And a lot of touch points.

The chemist store next door is playing it smart. The staff has downed the shutter half way, and isn’t allowing customers in. The three men in bend their backs to take the orders. That, they may reckon, is safer than having feet fall in the store, and hands crawl. The dread and disquiet here is on the outside. Customers, many brandishing prescriptions, try to get the attention of the men in the store. They’re shoulder to shoulder, almost cheek by jowl and—you’re tempted to judge—thick in the head. You remember that TV footage of that store in a smaller city in Maharashtra, where the owner had actually drawn circles metres away from each other, for customers to stand. Here, it evidently didn’t matter. They wanted their dose, never mind if they ran the risk of needing stronger medication later.

You return home, munch on the breadsticks and get back to checking the forwards on your whatsapp groups —from the guys singing ‘Staying Alive’ remotely to news that the owner of the eatery near your workplace has tested positive. You wish you had a cigarette, and opt for bagels instead. It’s Day 2. You remember reading a tweet that 21 days makes a habit. You look at the bright side: No cigarettes, no alcohol, but bagels, buns and business as usual. The laptop beckons.

Down in the neighbourhood, the teenage boys from the ghettos play cops and robbers—rushing back into the narrow alleys that lead to their homes when the batons appear. Home for them, however, is usually up to 18 hours of the great outdoors. They’re happier and more secure there. Maybe in these times, being out of home may actually be safer than being cooped up. That doesn’t work for you, of course, as you pick up your smartphone and rush into the other room for some solitary company (you finally grasp the meaning of that phrase from that song).

It’s 8 pm. The gates of the kirana store collapse to a close. You try to get into the shoes of those sales boys. In seconds, you’re back on your smartphone.

4,237
Thank you for your comment, we value your opinion and the time you took to write to us!
Comments 1

Tweets by @forbesindia
Next
At a Safe and Social Distance