Life in the lockdown

At a Safe and Social Distance 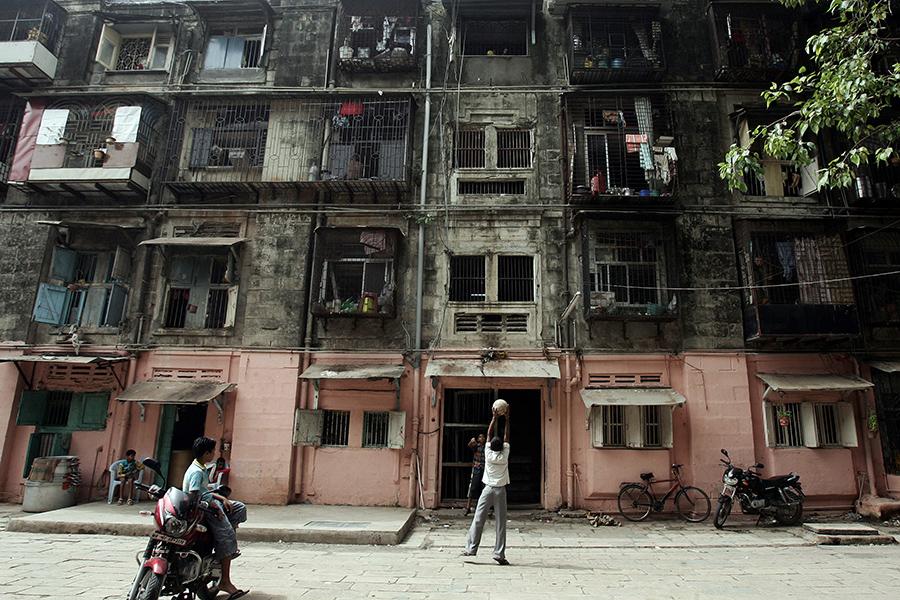 Half to two-thirds of Mumbai's population is estimated to live in slums and chawls. One of the largest tenements is in Worli, a sprawling settlement called BDD chawl. (Photo by Kunal Patil/Hindustan Times via Getty Images)

It was a hive of 10,000 one-room homes carved inside 120 identical three-storied buildings that stood like grey ruins, their paint long removed by old rains. Portions of the outer walls, sometimes even roofs, kept falling off, especially in the calamitous rains of August.

That’s how Manu Joseph described the chawls of the Bombay Development Department, seeped into the soul of every Bombaykar north of Malabar Hill as BDD, in his debut novel on caste and class struggles, Serious Men (2010, HarperCollins). As Joseph offers: “The chawls were built by the British more than eight decades ago in a belated attack of conscience to house the homeless”.

Anybody from the working class that has lived in Mumbai for four decades or so would have known somebody who knew somebody who sought refuge in a BDD tenement—some 16,200 of them across Worli, Parel and Naigaon. Worli is estimated to have the most of the 195 chawls, the ones that Joseph described as “gigantic clusters of boiling tenements”. The rooms were “as large as a Mercedes”, small dark rooms “on an endless corridor of gloom”.

Worli, in south Mumbai, is a microcosm of a city in which half to two-thirds of the population is estimated to live in slums and chawls. Hugging the Arabian Sea are some of the rest: In bungalows and skyscrapers, who descend to the sea-face to demolish the calories that add up as briskly as those elevators that zoom up to the penthouse on the top of the tower.

Between the sea-facing and sky-scraping—and the main arterial Annie Besant Road, which connects the city’s south to the suburban—are the comparatively modest, middle-class buildings that house state government bureaucrats, municipal corporation honchos, judges and income tax officials. The retired among these typically head to their places of birth and rent out to corporate executives working out of Lower Parel—till not-too-recently euphemistically dubbed ‘Upper Worli’.

It’s around these pockets of proud prosperity—at an adequate safe and social distance—that lie the BDD chawls. Thickening the plot, also off the main road but towards south Mumbai, is the sprawling slum on a hillock that’s commonly known as Siddharth Nagar. The colony assumes importance for tony Worli, because much of the house help resides there. One of the entry points to the tens of thousands of shanties on the hill is via a non-motorable road with a Hindu temple and a Buddhist shrine on either side. This is a land of Ambedkar, and ‘Jai Bhim’ is the mantra. The road quickly narrows as you make the trek, and is estimated to go on for a 2 to 3km before you reach the peak (only those with a home or business on the hill would have made the entire trudge).

Back in BDD’s byzantine lanes, on a walk past dusk, “mother hell” comes to life. The lights are bright, a carrom board with men huddled around it occupies pride of place in the perpetual passage of one of the buildings. Men and women linger in the aisle; many are outside—on the street, or in the main square. Most of the buildings have a place of worship and a cement-made stage that comes to life during festivals. Kids dance to a 70s Bollywood disco number. It’s Sunday, and the party won’t stop. Joseph’s “mother hell” reminds you of that slogan on a T-shirt: “The longer you dance with the devil, the longer you remain in hell”.

If these are the nooks and crannies of perdition, they’re well stocked. The BDD chawls of Worli would arguably have one of the highest densities of chemists, grain and general stores in the city. They’re bustling, and there’s a relaxed air among buyers and sellers. Everybody knows everybody.

You try to shoot the breeze with a few men sitting on their hands outside one of the buildings. Any chance of scoring a few cigarettes, you ask hopefully. The conversation stops, they look up, and you feel the disdain may have left a mark on your forehead. “Tithe bidi milthat,” one of them grunts, pointing to a general store across the road. You nod your thanks and, after laying your hands on two bundles, you are in a genuine mood to express gratitude. You walk back to the group and try and strike up a conversation.

“What do you make of social distancing?” you venture. They don’t scoff; they just exchange glances. Till one of them sums it up: “Saat jan ghari, dokyala taap.” Which literally translates to: “Seven at home. Enough to give you fever in the head.”

You leave it at that. And you almost hear the group heave a sigh. The roads aren’t bare, boys and girls on two-wheelers, an old woman on a bed on the footpath gazing into her meal, and men striding with a sense of purpose. You’ve read horrifying reports from other parts of the city of police beating up people venturing on the streets. The cops in this neck of the woods are constantly entreating residents to stay indoors. They appear kinder and empathetic. You wonder whether they’ve been ordered to go easy. One of the cops you pass looks you up and down, evidently gauging from which part of the city you hail (not this part, for sure). He seems to know what’s on in your mind, and I can almost hear him say: “You can’t expect them to stay indoors all the time, do you?”

To be sure, the residents and cops may well share a certain bond. You even see boys on bikes passing on food to the policemen in their SUVs. The cops know the life. Close to a fifth of the 16,200-odd tenements in Worli’s BDD chawls are home to the police.

4,106
Thank you for your comment, we value your opinion and the time you took to write to us!

Tweets by @forbes_india
Prev
A Day in the Life
Next
Eat, Pray, Sanitise