Life in the lockdown 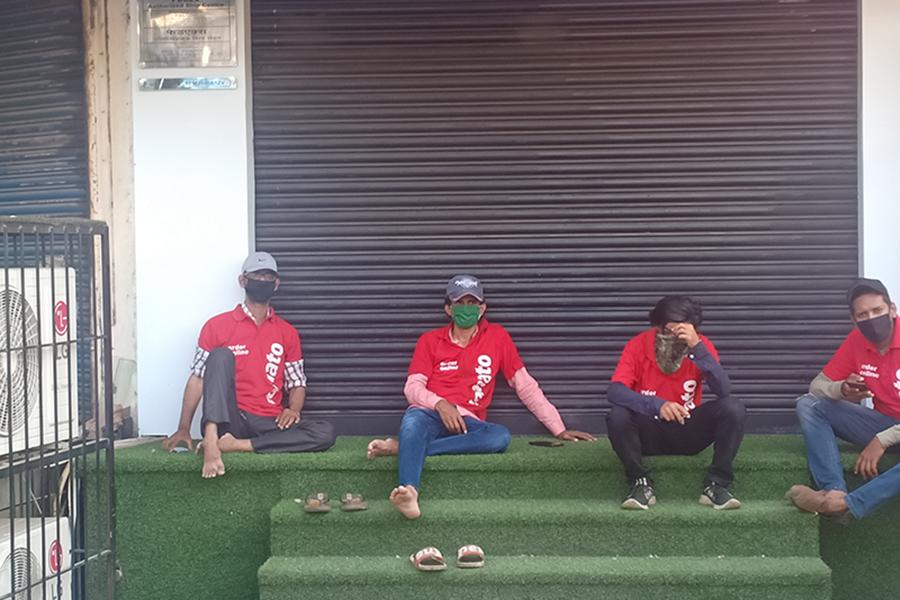 Zomato delivery boys outside Bandra's iconic Lucky restaurant say they have nowhere to go, as fewer people are ordering in during the Covid-19 lockdown. Image: Brian Carvalho

Perhaps as chilling a read, in these times, as Albert Camus’s The Plague would be Anthony Bourdain’s Kitchen Confidential: Adventures in the Culinary Underbelly. For totally different reasons, of course. Consider, for instance, the chapter 'From our Kitchen to your Table', in which the celebrity chef offers that “good food and good eating are about risk”. At a time when you’re pulling out all stops to eliminate that four-letter word from your lexicon and life, ‘discount sushi’ or dodgy oyster can be given the go-by, thank you very much.  But what’s a square meal without some saltwater staple? As the wise man said, “Wherever the fish are, that’s where we go.”

You step out to the neighbourhood supermarket, scurry to the seafood section and lasciviously eye the kingfish on ice. Until Bourdain’s advice on why “I never order fish on Monday” or the “Monday Special” rings alarm bells in your brain. You may be buying fresh but the similar logic holds. Here’s how:

Chefs tend to order fish on Thursday, with delivery scheduled for Friday morning, to cope with the weekend rush. “The chef is hoping to sell the bulk of that fish on Friday and Saturday nights, when he assumes it will be busy. He’s assuming also that if he has a little left on Sunday, he can unload the rest of it then—as seafood salad for brunch, or a special. Monday? It’s merchandising night, when whatever is left over from the weekend is used up, and hopefully sold for money.” Essentially, if you’ve consumed the fish on Monday, you’ve devoured seafood that’s five days old—and not in the most optimum refrigeration conditions. Not a comforting thought on the gut.

Weekend rush is no doubt an oxymoron in a lockdown, yet Bourdain’s theory works at another level: At a time when demand is at rock bottom, for how long has that pisces been isolating on ice? So you instead opt for canned tuna and salmon, walk out the store and past the line of people rooted in their squares, a couple of metres from each other. If Bourdain was right, one of them is going to be done in by the Monday Special. You chide yourself for that evil grin.

As you drive from the south of the city towards the suburb of Bandra, you’re finally getting used to a city that’s learnt to sleep (perhaps not at night, though). The only people on the roads are masked policemen, masked citizens lugging groceries—and masked delivery boys at street corners. This is a city synonymous with khao gallis and street food—from bhel puri and pav bhaji to dabeli and vada pav, to anda burji and boti kabab. Now all you see are delivery boys with almost nowhere to go.

You meet a group of Zomato boys in their ubiquitous red T-shirts outside Bandra’s iconic Lucky restaurant. They’re in a mood to talk. “Business is down,” shrugs one. “If we were earning Rs 1,300 to Rs 1,400 per day before the pandemic, now we take home Rs 300 to Rs 350. “People are too scared to order from restaurants,” adds another. Restaurant food is now like Monday fish, you ruminate. “It’s not just that,” pipes in the third. “People are also conserving money as they don’t know what the future holds.” Delivery makes way for analysis when business slows down.

You move on, past another supermarket with a queue outside. Evidently, in these times, standing in line for your supper beats ordering in. A few hundred metres away is the bakery with whom much of Bandra has broken bread over the decades. He’s also advertising hot cross buns for Good Friday. And roast chicken for resurrection Sunday.   Easter lunch on Zoom, anybody?

In times of Covid-19 and lockdown, ‘comfort’ food, if you’re privileged to access it, takes on huge meaning. When little else offers relief—not even the tender assurance of touch—food, along with books, can console and calm. Just don’t mix the ‘wrong’ book with the ‘right’ food.

6,631
Thank you for your comment, we value your opinion and the time you took to write to us!

Tweets by @forbes_india
Prev
At a Safe and Social Distance
Next
Sunanda Bai: The real inspiration in my life