There is a simple pattern in how the smartest innovators work. It's how they look at innovation

As a child, I used to wonder where mosquitoes in winter hide, why fish keep swimming, how birds learn to fly and other such 'un-natural' occurrences. After a career in marketing & communications for over 20 years, building and running businesses of excellent sizes and in many a geography, hiring and training dozens of successful managers, I continue to be aggressively curious about beings and things. In 2011, I co-founded Friends of Ambition, a Business Growth Platform for Middle India. It works with growth-minded businesses in Middle India and helps them professionalize their operations, build internal capability and become agile. Our focus on Middle India [a.k.a Tier 2 towns] stems from a strong conviction that the next several decades of explosive business growth in India will come from that geography. As I often find myself in cities and towns I might have only heard of just a few months ago, meet business owners there and hear their stories, dreams and challenges, I feel a sense of elation and sadness, sometimes simultaneously. This blog is a chronicle of my experiences in Middle India - mostly gleaned from real life encounters with business owners, their influencers and well wishers.

When engineer Narendra Joshi’s nightly sleep kept getting disturbed for several weeks in a Delhi colony because of the noise created by marble floor polishing in his neighbouring house, he gently suggested to the neighbour if he could get a less noisy machine. The neighbour’s response was quite straight: “find me one and I will buy it”. Joshiji couldn’t find one in the market, so he built one over three months. That’s how he got to leave his Indian Navy job and start his business in 1991. 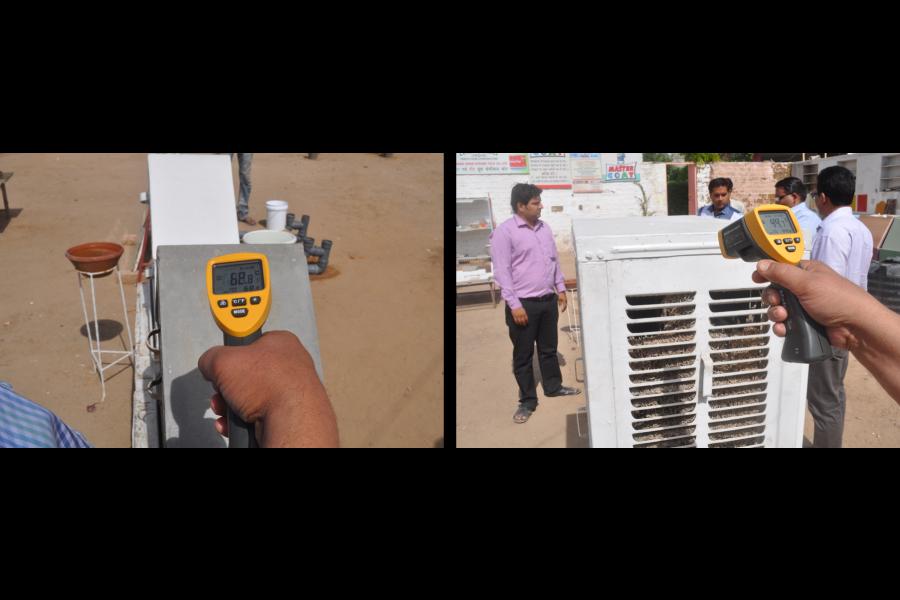 Nushar's MasterCoat cuts surface temperature by as much a 18 degrees Celcius. MasterCoat is one of dozens of innovative products Nushar produces.

Today, his Jodhpur based company Nushar, produces more than eighteen innovative products in the area of construction chemicals and stone processing products, many of which he claims, can beat the best names we have heard of. Some of Nushar’s stone processing products save as much as 65% electricity, while giving a superior finish to the floor. Its construction chemicals provide strong waterproofing and heat insulation and keep houses seepage free and home interiors cool, when even air conditioners would fail. When my colleague Sanjay and I met Mansukhbhai Patel and Kiritbhai Patel of cotton ginning company Chetak Industries at Viramgam in Gujarat in May 2013, we didn’t know that he was already a celebrity innovator, having been awarded and written about many times in the past and having received patents against his cotton stripping machine. Mansukhbhai, we later learnt, is some sort of a poster boy for the grassroots innovation movement, amongst his biggest admirers being Prof Anil K Gupta of IIM Ahmedabad, National Innovation Foundation, GIAN and the Honeybee Network.

Kunal Mehra left his family business of textile manufacturing in Mumbai and relocated to Vadodara in 2009 and started his business of converting discarded shipping containers to portable offices, ATMs and bank branches that helped banks set up branch offices and ATMs within hours instead of days.His company Modutech Building Systems today has moved beyond decommissioned containers and is emerging as a highly innovative company making completely built up modular, pre-fab and portable ATMs, bathrooms, public utilities, even bungalows. The units, with insulation, air-conditioning and plumbing all complete, can be stacked up to as high as nine storeys, Kunal told me.

Rajkot’s Jayesh Radadiya, Jodhpur’s Sandep Kapur, Aurangabad’s Prasad Kokil, Kanpur’s Raghu Kanudia and many others have similar stories of innovation. Some are creating engineering innovations, some are innovating business models and some others are trying to cut operating costs innovatively. [more about their stories in subsequent posts]

Aurangabad's Ecosense Appliances, lead by Prasad Kokil and his two friends, makes LPG cookers and 'chullahs' for residential and commercial use, that save up to 70% energy

There are many lessons to be learnt from talking about innovation with these and other entrepreneurs in Middle India, Metro India and elsewhere in the world.

1.    Innovation is different from Improvement Most of us know the difference between Invention and Innovation. Unfortunately, we tend to think every new thing that’s not an invention, must be an innovation. That’s where the trouble begins.

Whether we call it Kaizen or not, most of us try to do things better, whether under pressure to improve our productivity, as a part of our accountability to our stakeholders or just as part of human nature. So when we are replacing one manual process with another or even a manual process with an automated one, we are improving the process, not innovating. We can improve everything: operational processes, talent practices, customer service, quality management and so on. Is improvement good? Of course it is. But is it enough?

Improvement or Innovation? What do you see here?

Improvement carries very little risk, if it does not work, we can usually go back to the previous state. Innovation carries higher risk, whether it’s incremental innovation or radical innovation. Because innovation essentially means doing something differently, there is something disruptive about it and also something entrepreneurial, no matter how small.

2.    Innovation is more than Jugaad
Let me say it upfront, I see jugaad everywhere around me and I am not against jugaad. To find a hack is not only cool these days, it’s a necessity. We Indians built jugaad as a survival mechanism because of a debilitating resource constraint and lack of system assurances of action. As long as the negative version of jugaad, bypassing systems and processes, is avoided, I am quite accommodating. End user fixes and hacks are laudable. But are they enough?

But have we come to glamorise jugaad and depend on it a bit too much? Can we call a need to find short term, tactical fixes to overcome roadblocks, strategy? Since jugaad is more often than not an end user’s ‘fix’, can manufacturers or service providers assume that as long as end users can find what software companies call a ‘work around’, it’s okay?

It is perhaps all right for a small business in its early stages, when it is absolutely resource constrained, to mostly do problem solving or accidental innovations. But can a growth ready company afford to do the same?

You need to walk by or into the R&D facility of Matrix Comsec in Vadodara and see the sheer number of people that company has dedicated to research. It's a glowing rebuttal of the popular belief that mid sized companies cant afford to invest in R&D. Matrix Comsec could not have done that for problem solving or accidental innovation alone. We have seen sub- Rs 10 Cr companies such as SEE Tech Solutions in Nagpur and Nushar in Jodhpur, invest disproportionate amount of energy, money and people in doing purposeful innovation. These companies have learnt that jugaad alone does not pay.

People have two contrasting views on innovation – the harsh view and the kind view.

People with the harsh view respect only radical innovations, the kind of innovations about which speeches are made and books are written. To them, if you don’t push the limits and take big risks, you will not come up with innovations. Those with the kind view are okay with incremental innovations, perhaps because they have a less than extreme view of human abilities.

Naturally, the harsh view folks think incremental innovations don't deserve the innovation tag and are actually created by people who are complacent.

Personally, I feel there is a role and need in business for both kinds of innovations – radical and incremental - the economic, business and customer context decides where we apply ourselves more.

The problem in India, I feel, is we don’t differentiate between the two types of innovations and therefore end up claiming incremental innovations as radical.

The smartest and most innovative business owners recognize each type of innovation for what it is. Consequently, they are less defensive, and are able to deploy right resources and create right processes for each type and achieve more radical innovations, which I feel should be included in the the goal of all businesses.

5.  Entrepreneurship and Innovation are different things
Because both involve a certain degree of risk, Most people assume naturally that every entrepreneur must be innovative. Truly innovative business owners don't. That, in their view, is the single biggest trap they can fall into. This is a back patting belief. Since every business owner can be referred to as an entrepreneur, he may seduce himself into believing that whatever he does must be innovative.

Both are useful for our businesses and at many levels both are related, but they are not the same. A smart entrepreneur asks himself whether he’s innovative and whether he is building a team that’s innovative.

19,989
Thank you for your comment, we value your opinion and the time you took to write to us!

Tweets by @forbesindia
Prev
Are Indian businesses as innovative as we think they are?