Women in India have a larger share of unpaid and unrecognised domestic labour. Social isolation at home could perhaps be a time to understand and redistribute tasks more equitably 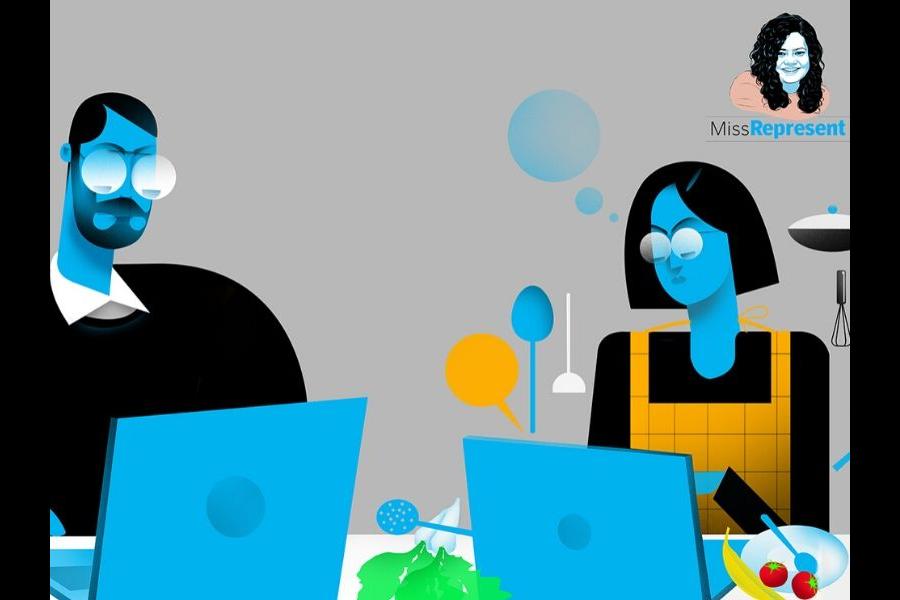 We’re all in this together. But are we, really?

Sunanda Aggarwal*, 50, an office assistant at the government’s Industrial Training Institute (ITI) in Rajasthan’s Beawar usually has two women to help her with the house chores. The domestic staff also hand-washes the laundry, keeping the water scarcity in Beawar in mind. Working from home during national lockdown to contain the spread of the coronavirus, Aggarwal’s day is consumed by single-handedly doing all the household chores in the absence of her domestic help. Her husband, a local retailer, is out playing cards at a neighbour’s house; her son, a 26-year-old aspiring chartered accountant, spends time video calling friends, streaming films, and generally being indifferent.

“Only I was ‘trained’ to help my mother in household chores and cooking, but I have relocated to Mumbai now,” says her 25-year-old daughter, who works in financial services. “So lockdown or no lockdown, she does everything on her own. Everyone just assumes she’ll get it done, even though all of them are at home. It’s like all her effort is invisible.”

Sapna*, a domestic worker in South Mumbai, finds herself in a similar situation. Her husband, a driver, lost his job a few weeks before the 21-day lockdown. Living with them in their small kholi in Dadar is also her aged mother-in-law. For two days after the Janata Curfew imposed by Prime Minister Narendra Modi on March 22, Sapna continued to cook and clean vessels at the homes she works at, fearing her employers will deduct her wages. She was relieved once assured that she will be paid in full, but the uncertainty of life ahead worries her. She does not know when her husband will find a new job and running the house with limited resources will be challenging.

“Not that he is much help to me otherwise,” she says, describing how her days—even under normal circumstances when she has to report to work—involve cooking, cleaning, washing clothes, caring for her mother-in-law, stocking up on groceries, medicines and other essentials. And repeat.

She hopes that the lockdown does not worsen things. “He [the husband] will help me once in a while, only if I ask him to do something, but my mother-in-law does not appreciate him doing house-work. So, I end up doing it all,” says Sapna, aged 30. “I’ll have to manage with whatever I have.”

The coronavirus outbreak has shown us that people, unfortunately, acknowledge the contributions of their domestic help only when there is a disruption in supply. As the country reels under a lockdown, the gendered division of housework done by men and women exposes an unspoken sexism prevalent across socio-economic strata: The lopsided burden of unpaid care work.

The Organisation of Economic Cooperation and Development defines unpaid labour as the time spent by an individual cooking, shopping for essentials, child and elder care, cleaning and other unpaid activities related to household maintenance. According to the World Economic Forum’s Global Gender Gap Index 2020, India has closed two-thirds of its overall gender gap since 2006, standing at 66.8 percent. But the country ranks poorly at 112 out of 153 countries when it comes to women’s disadvantage compared to men in health, education, economy and politics.

Place that alongside another staggering statistic from the Economic Survey 2020: 60 percent of women in India between 15 and 59 years of age are engaged in full-time household work, while the female labour force participation in India has reduced from 33.1 percent in 2011-12 to 25.3 percent today.

Unpaid care work is one of the main reasons for gender disparity in India; while most women have no choice but to perform household work, it is but a matter of convenience for most men. Megha Chawla, partner at management consultancy Bain & Company, says that on average, 60 percent of the work done Indian women do is unpaid and unrecognised, while for men, the number is at 10 percent.

“This work can be in the form of education or care for household members, but also free labour provided for household enterprises. Women do not partake in the benefits of their labour either, be it recognition or economic independence,” she says.

The India Inequality Report 2020, released by non-profit Oxfam India in January, highlights that women spend 312 minutes per day in urban areas and 291 minutes daily in rural areas on unpaid care work. Men correspondingly spend only 29 minutes (urban) and 32 minutes (rural) on the same.

The burden of unpaid labour often results in women either looking for part-time jobs or dropping out of the workforce altogether. In many households, according to the report, women are judged by the quality of their housework, and this is also a “trigger for violence on women”.

As social distancing due to Covid-19 forces both men and women to stay indoors, the home might as well become the most contested space for equal gender relations. “Even in very enlightened households, women are doing most of the domestic work, especially tasks that are repetitive, backbreaking and time-consuming. The men of the house usually offer to help with tasks like cleaning the car, doing the laundry or buying groceries,” says Ranu Bhogal, director-policy, Oxfam India. She explains that for most women working from home, household chores and professional commitments flow into each other, leaving them with very little downtime.

Experts say that over the years, men have become more likely than ever to embrace the idea of gender equality. Multiple social movements, surveys and studies have documented their changing attitudes toward supporting gender identity, and the careers and ambitions of women. Even in India, there is no one household category or age group of people that could be called gender sensitive, since it depends on education level, financial independence, family mentality and power dynamics. To bridge the gap on the domestic front, one needs to start a dialogue around social roles.

“It is very difficult to change adult men and their behaviour because they have never done unpaid care work in their lives—but it is essential to have conversations with them. This is the time you help young boys and girls see the amount of work there is to be done at home, teach them and enlist their help,” Bhogal says.

She explains that women carry much of the burden of domestic work while men take up easier tasks, given that men are more mobile than women and hence do tasks that involve going out. It’s also the perception of men navigating the external world, while women manage the home front, she believes. “Ultimately, it all boils down to social norms. Men and boys must be sensitised to the huge burden of care work women and girls carry. Boys must be trained in housework. In that sense, the lockdown could be an opportunity to introduce gender equality at home.”

Chawla views the pandemic as a setback to those women who have fought cultural and societal biases to get to work. Unemployment is three times more prevalent in women than men and is likely to continue affecting them. “During the lockdown, if the woman ends up doing most of the domestic work, traditional gender roles will start to take shape again or intensify further,” she says.

Efforts to create value for unpaid care work must begin at home, with families and individuals. “The value of unpaid work will increase in the long term when more women are able to join the paid workforce,” Chawla says. “Till then, the only way this labour can be acknowledged is if there is a social value put to household work and everyone contributes equally.”

(*Names have been changed on request)

13,747
Thank you for your comment, we value your opinion and the time you took to write to us!

Tweets by @forbesindia
Prev
'Politics should be the lifestyle of every single person': Hajer Sharief
Next
The Harder-Hit Half: Why India needs a gendered approach to Covid-19