Cyclone Fani: How Odisha is slowly coming back to its feet

Taruka Srivastav is a media consultant with clients like Manchester United. She is a former Asian Games Player and has previously worked with Hockey Men’s World Cup 2018 and FIFA U-17 World Cup 2017. 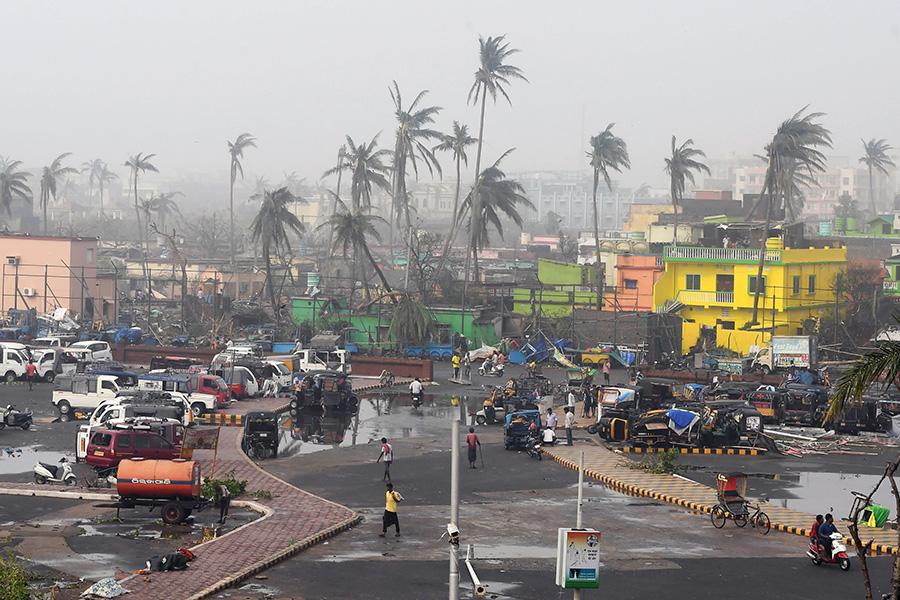 TOPSHOT - People gather next to storm-damaged buildings and palm trees in Puri in the eastern Indian state of Odisha on May 4, 2019, after Cyclone Fani swept through the area. - Cyclone Fani, one of the biggest to hit India in years, barrelled into Bangladesh on May 4 after leaving a trail of deadly destruction in India. (Photo by Dibyangshu SARKAR /AFP/Getty Images)

While the national attention is focused on elections, Odisha’s catastrophic conditions in terms of environment and infrastructural damage from Cyclone Fani stands largely ignored. The cyclone winds clocking 240 kmph upwards have uprooted a million trees in Bhubaneswar,  annihilating green cover and beach front properties in the town of Puri. Cyclone Fani was the longest cyclone the Bay of Bengal ever observed, and went on for 11 days in the sea and land put together, as per the India Meteorological Department. As a result, the impact and damage was more severe than Odisha endured even during the Super Cyclone of 1999.

However, the Odisha Government could minimise casualties to 64 deaths, as compared to 10,000 in 1999. This is a good figure even when compared to cyclones and hurricanes of the same intensity (or less) around the globe. Hurricane Maria reported 2,975 deaths; Cyclone Idai, 750 deaths; Hurricane Sandy, 72 deaths; and Hurricane Harvey, 78. This was the result of one of the world’s largest mass evacuations, carried out bya day before Cyclone Fani made the landfall in Puri.

In the aftermath, Odisha’s tourism has taken a big hit, with two of its primary tourism cities i.e. Bhubaneswar and Puri facing severe damage. With the state’s marquee car festival, Lord Jagannath Rath Yatra approaching in July, the situation has left both hoteliers and the government concerned.

The Hotel and Restaurant Association of Odisha (HRAO) president, Jitendra Kumar Mohanty, said, “The hospitality sector in Puri and Bubaneswar is undergoing losses of over Rs 2 crore each day. As businesses of hotels have been severely affected in Puri, and restoration works may run into crores of rupees, we will submit a memorandum to the state government requesting it to take it up with RBI and other banks for a moratorium on loans for reconstruction. The hoteliers are working on a war footing to restore normalcy.”

According to journalist Peter Asmus, writing in Forbes, "The average citizen (in Puerto Rico) [went] 84 days without electricity following Hurricane Maria in September 2017." While 80 percent electricity restoration has taken place in Bhubaneswar after one week, Puri has received electricity only in the Badadanda locality so far. Convoys of utility trucks and reinforcement workers from various districts in Odisha, and from other states like Andhra Pradesh, Chhatisgarh, Telangana, among others, have arrived in Puri to help restore electricity.

“We have deployed  more than 3,000 men at distribution sites, and more than 300 workers at transmission sites, in Puri. It is expected that the 132 kv line should be ready by May 13, which will help us bring power back to Puri town and peripheral areas by May 15 at the latest," says Hemant Sharma, energy secretary, Government of Odisha.

But even as the National Disaster Response Force (NDRF), Odisha Disaster Rapid Action Force (ODRAF), Odisha State Disaster Management Authority (OSDA) and Odisha Works Department, work to bring towns back to life, it will be weeks before the full extent of the rebuilding challenge would be known. The first priority for the officials is to restore electricity in hospitals and other vital service providers.

This leaves small businessmen in the lurch. Ramesh Chandra Mohapatra, a resident and Applique workshop owner in the handicrafts village of Pipli, hasn’t opened his shop for a week. He said: I am trying to fix the roof of my shop first. There is no electricity and no tourists so there's no point. The entire town is facing the consequences of Cyclone Fani.

Meanwhile, food distribution by the government is in full swing in both urban and rural areas.

Balwant Singh, collector, Puri district, said, “The priority for us right now is to provide relief and restoration. The municipality water line has been restored. About 300 pipelines have been activated and 515 kitchens have been in operation at various locations. Major telecom providers have set up cell-on-wheels to tackle communication problems. Mobile ATMs are doing city rounds to ensure cash inflow. Most banks have opened up their branches as well.”

The author is a media consultant with clients such as Manchester United. She is a former Asian Games Player and has previously worked with Hockey Men’s World Cup 2018 and FIFA U-17 World Cup 2017

12,637
Thank you for your comment, we value your opinion and the time you took to write to us!