India to London road trip, part 11: Latvia, Lithuania, and a flavour of Gujarat in Poland

Europe welcomed us with incessant rain, unusual for this time of year, but we got a healthy dose of cultural experiences—and a treat to Gujarati food in Warsaw 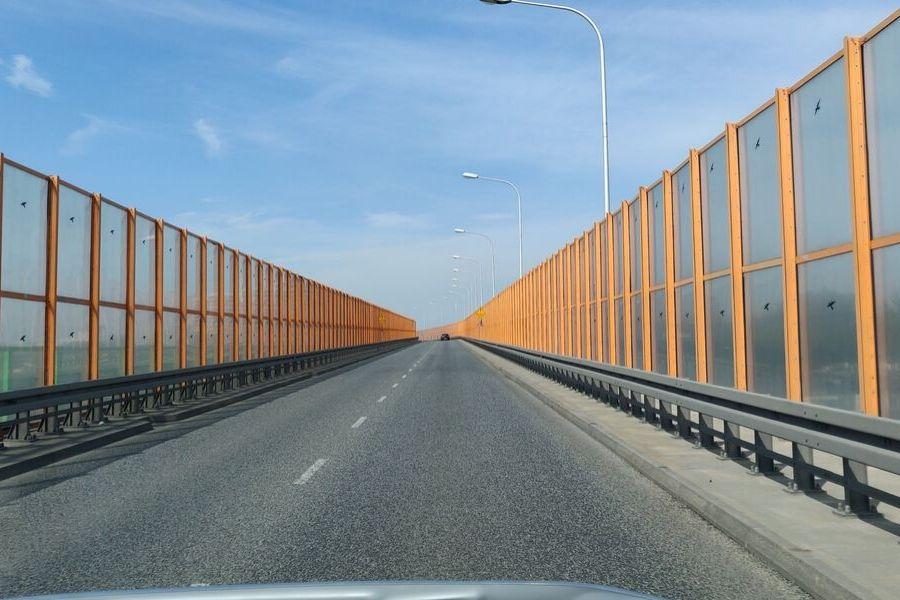 Riga, Latvia to Vilnius, Lithuania: 331 kmWe crossed the border of Latvia by 5 pm, and immediately pulled over for a bite, as pm we had eaten nothing all day, crossing the two borders of Russia and Latvia. We were to stay in Riga, capital city of Latvia for the night, but had to stay an extra day at the border instead, to sort out matters of the lost passport and motorcycle papers formalities of BQ Rider Jinal Shah.

We started at 5.45 pm from the border of Latvia and the BQ riders took off ahead of us losing their way many times, with no internet on their phones. It was already dark, and there was no trace of them. We couldn't reach them. It was certainly not wise of them to go ahead in the night with no mechanical backup.

I drove on, hoping to catch up with them, as that was all I could do. We reached Vilnius past midnight. Thankfully, the riders had reached five minutes before us, as they kept losing their way, but it was a relief to see them. I hoped they would understand what a mistake it was to go ahead without an internet connection.

The next day was a rest day, so I took a long evening walk around the capital city. I visited St Anne’s church, Gate of Dawn and the Gediminas Castle Tower. It’s an old city with a well-maintained ancient structure. An open-air sculpture workshop reminded me of the famous Fine Arts faculty of the MS University back home in Vadodara. It rained that evening, so I returned to sit by the balcony and watch people go by. 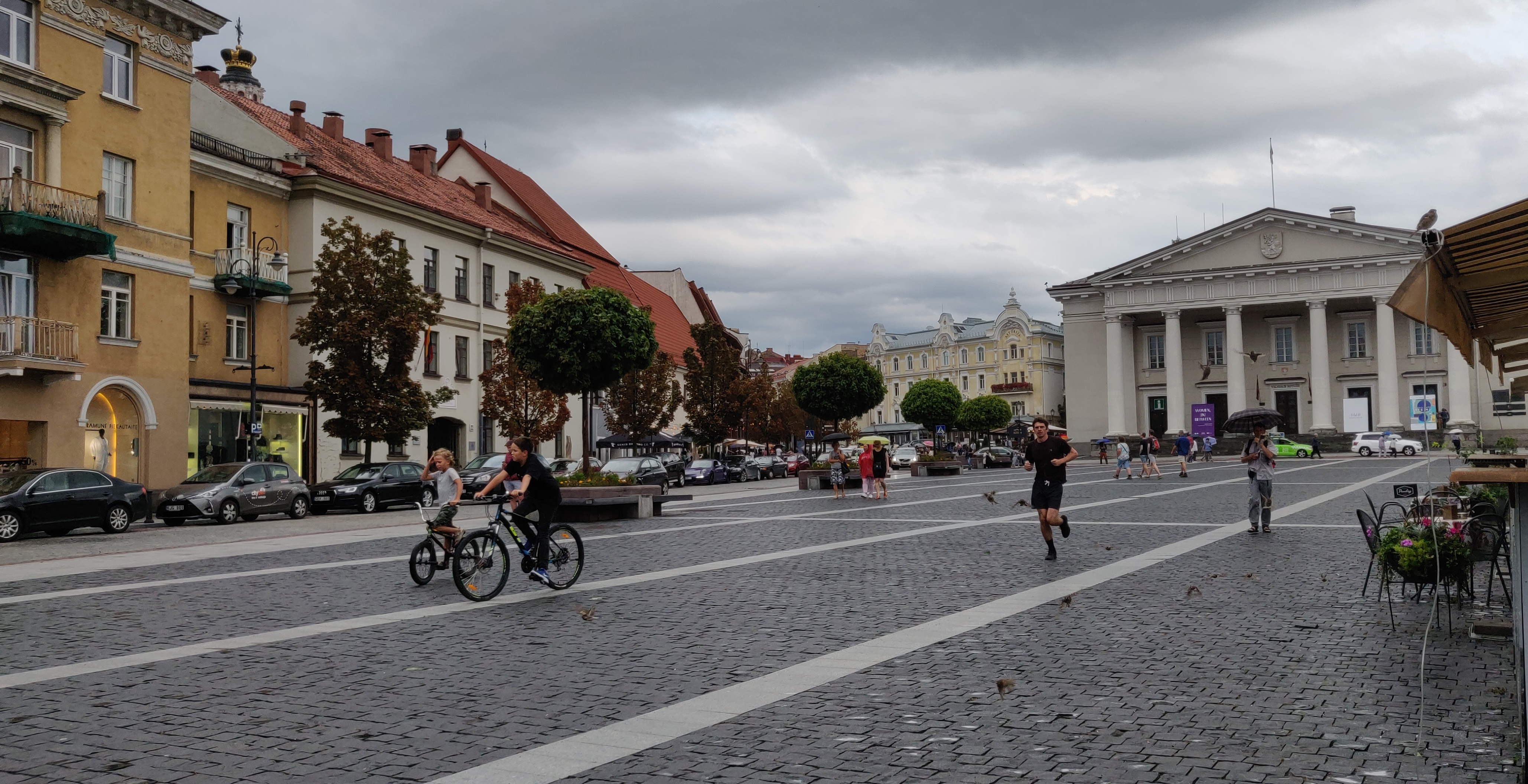 We went to a local pub for a beer, and also because it's the only place you can interact with local riders. We met a group of riders from Poland and exchanged notes; many of them took pictures with us when they learned of our long and adventurous journey.

Vilnius, Lithuania to Warsaw, Poland: 460 kmWe set off rather for Warsaw rather late, at 10.30 am, and it was going to be a long drive. The roads were good, now that we were in Europe. The rains intensified by noon.

One of the rider's bike tyres wore out in just 8,000 kms, torn in the middle such that the metal threads could be seen. I located a repair shop and pulled over. Honey Desai, the BQ riders' auto technician, removed the damaged rear wheel. It’s easier to change a front tyre, as removing a rear tyre involves dismantling the braking system too. It took about 45 minutes to fix.

Interestingly, in Europe there are different sets of tyres for the summer and winter. Changing tyres every season means fixed income for the repair shops. 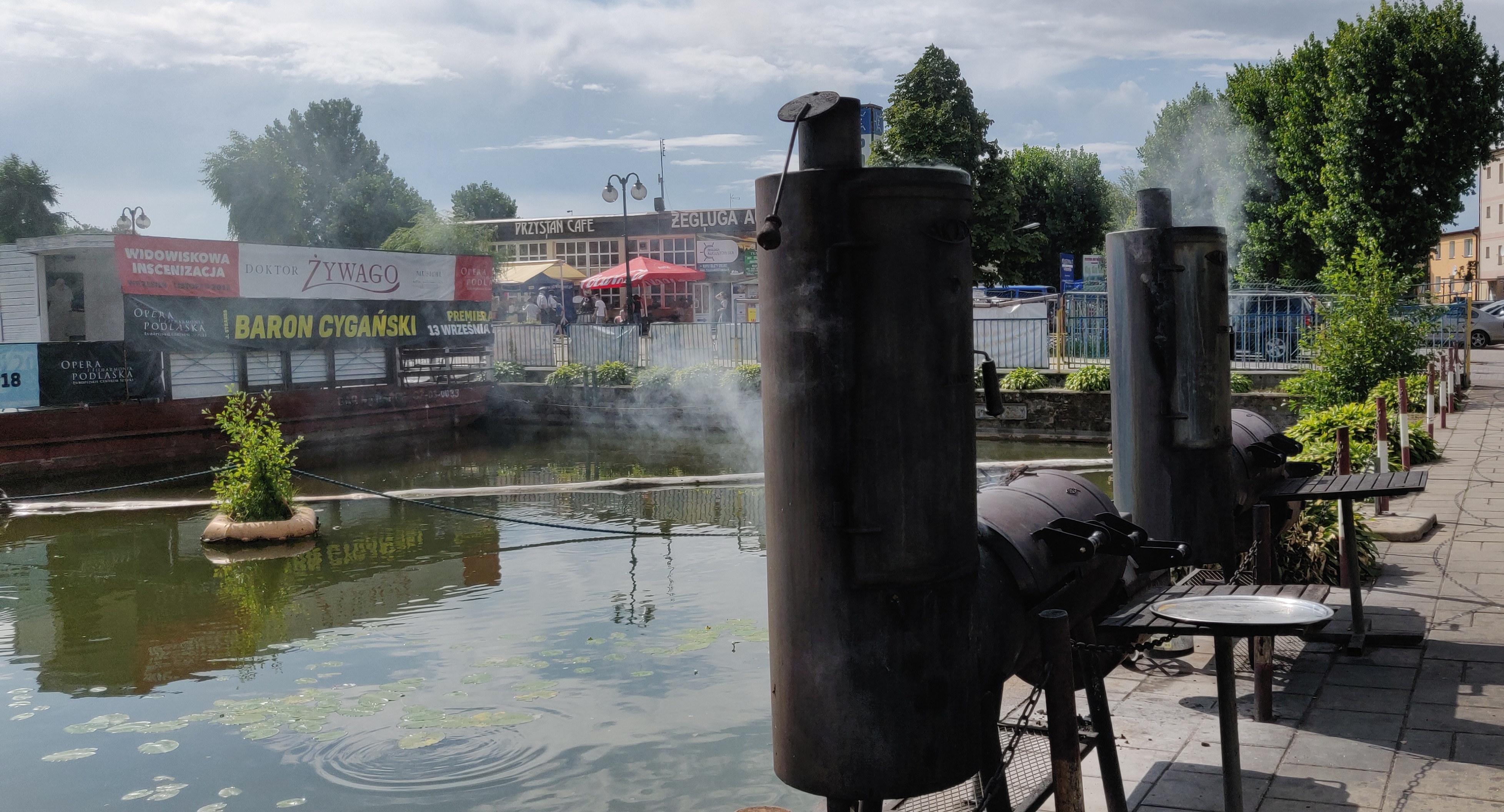 For lunch, we stopped at the beautiful Augustow city in Poland and chose a a river-front café called Zagielek. I saw, for the first time, how smoked fish is prepared, outdoors in a grill. After our meal, we moved on towards Tomez on way to Warsaw, crossing many large fields that had already reaped the wheat crop. Here, each town's bridges have sound barriers on either side that are at least 30 feet high.

I was very eager to reach Warsaw, as my dear friend, Norbert Liebentritt, was waiting there for me. He detoured 900 km from the UK on his motorcycle to meet me, on his way back to Austria. We had met in 2013 for 30 minutes somewhere on a highway in Kazakhstan, with a promise to meet again. He visited me in 2015, and we rode a Royal Enfield for a fortnight in Gujarat. He went back with a fantastic impression of our country. Since then, he has been asking my wife and me to come spend time with his family in Austria.

This year, we had decided to ride the Alps for 20 long days, and he had arranged a motorcycle for me too. Unfortunately, as the BQ event from India to London got rescheduled twice, I could not make it. So here he was, in Warsaw, on his BMW 1200 GS, on which he has already clocked 1,20,000 km. We were both excited to meet up and spent a wonderful evening swapping stories of our rides and our families. Norbert is a grandfather now, and so am I.

Such is the bond of motorcyclists who travel the world. When you drive a car, two drivers who pull up at a highway restaurant or gas station will never meet. It’s the brotherhood and fraternity of motorbiking that urges you to stop and seek out others like you. A motorcyclist would stop if he sees a biker stranded and offer to help out.

Norbert and I had booked rooms at the same hotel, and there happened to be a Polish wedding going on here: Patryeja weds Jan Pieter. Patryeja, from Poland, was seven  months pregnant and decided to marry her boyfriend, Pieter, from Holland. They invited us to the wedding too, but the ceremony had finished by the time we reached. However, the evening was followed with much music and dance, with lots of beer flowing. We got to interact with the bride and groom too. The bride previously worked for a motorcycle group as its publicist, and gave me contacts I could reach out to if I wanted to conduct a big event here.

Norbert and I treated ourselves to a Polish meal for dinner. I had Domowe Makarony, or handmade Tagliatelle with sautéed shrimps, garlic and chilli in light white wine sauce, while Norbert had pork fillet sous vide, served with potatoes, thyme sauce and chanterelles, sautéed with green peas. Early next morning, Norbert left for Austria. I am so happy to have special friends like him in the many countries I have ridden through.

Some members of the Gujarati Association in Poland, headed by Pranav Nagar, came to the hotel to receive the BQ riders; it's always nice to meet Indians around the world. They took us around the old town market square and the 17th-century Sigismund’s Column of Warsaw, and treated us to a Gujarati meal. They also arranged a meeting with the deputy mayor of Ursynów, a district in Warsaw, Klaudiusz Ostrowski, who helps organise a big Gujarati garba festival here, once a year. Poland has a sizeable Gujarati population.

It’s been raining in Europe for most days, and the locals tell us that this is unusual for this time of year. Climate is changing all over the world, and I think back to India, where we're seeing unusually torrential rain in Gujarat too.

13,304
Thank you for your comment, we value your opinion and the time you took to write to us!
Comments 1