The crew had strange experiences aboard ferry rides between the cities, and went through exhausting formalities; on the upside, they found great food, including Msemmen in Morocco, identical to the Indian paratha 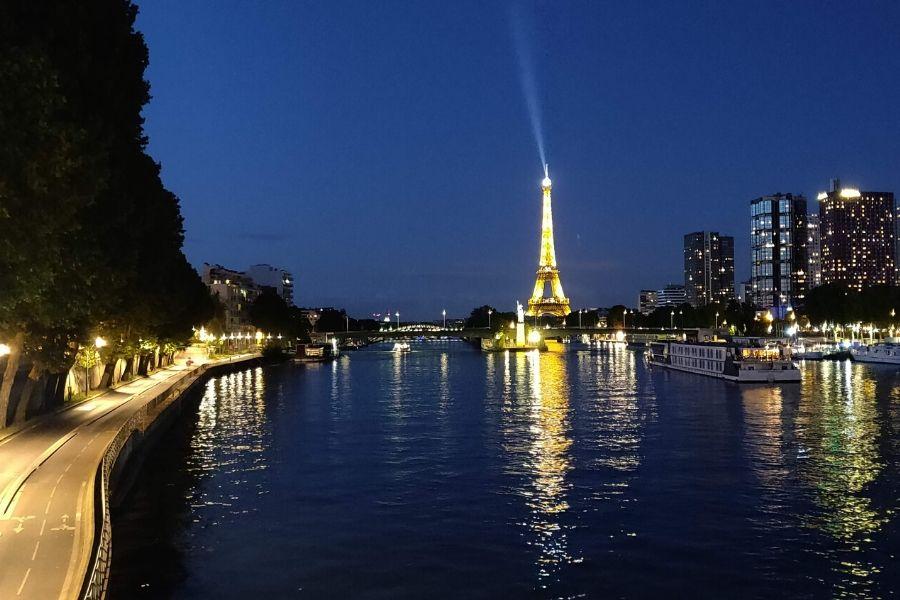 Celebrating 130 years of the Eiffel Tower

ParisEarly in the morning, I had to update details of the participants in both the ferries booked, one from Barcelona, Spain to Morocco, Africa; and the other from Calais, France to Dover, UK.  Changes have a cost attached and can be made only before a week of sailing. First, the ticket of Jinal Shah had to be cancelled in both ferries, as she had lost her passport in Moscow and had to return home.

Secondly, the motorcycle details had to be changed as the BQ riders' bikes were stolen; they had hired a BMW motorcycle to complete the journey to London. The update request was made and within 48 hours, one would get the confirmation. It cost 80 Euros to make the changes.

Imtiyaz Ansari, the photographer, had an early shower and wore new clothes and offered prayers in the room on the occasion of Eid. We were staying a bit far from the main city of Paris. Most non-Indian owned hotels here have signages saying 'INDIEN Hotel' and not actually 'INDIAN Hotel'.

It was the Eiffel Tower's 130th anniversary year, so Honey and I spent the late evening seeing the dazzling lights of the bright wonder of the world. It looked remarkable, especially from a distance over the river waters. The sky was a beautiful shade of blue, adding to the festive atmosphere. The roads were busy with tourist trying to get their best selfie with the Eiffel Tower. Street vendors were by the dozens, offering miniatures of the Eiffel Tower. It was a lovely drive in this romantic city of Paris in the late evening.

Paris to Barcelona, 1,110 kmLeaving Paris, one has to go through many internal lanes. We were driving towards Montpellier through villages, which was a different experience in each country. It was going to be a long drive half way to Barcelona, as we started very late, since the BQ riders got delayed. Most of the landscape was hilly, the weather was overcast, and we encountered light showers. It was 556 km when we reached our destination, midway off the highway. Meals are difficult to find en-route, especially as we were reaching our destination late in the evening, after 11 pm. Most restaurants take their last orders here by 10 pm.

The next day, we set out on the road to Barcelona, 554 km away. The distance is almost the same, whether you go through the toll roads or rural roads. The tolls in Europe are very expensive, but the BQ riders weren't comfortable with the sharp bends on the other path, which is more scenic.

We came across beautiful village exhibits of furniture, wood miniatures, sculptures of animals, ceramics etc.  After a McDonald's lunch, we headed towards Girona, Spain. On both sides of the borders of France and Spain lies the town of natives, Le Perthus, which is a busy town that falls partly in France, partly in Spain. It’s a paradise for shoppers.

On the France side of the border, discounts were up to 90 percent at many stores. On the Spain side, after the border of Le Perthus, were huge malls dominated by sex toy stores. After entering Spain, within a few minutes, we drove past a village that seemed abandoned. Across the streets and walls were paintings that said 'REVOLT'. We couldn't spot a single human being and I had no idea what was going on here; we sped past the town. 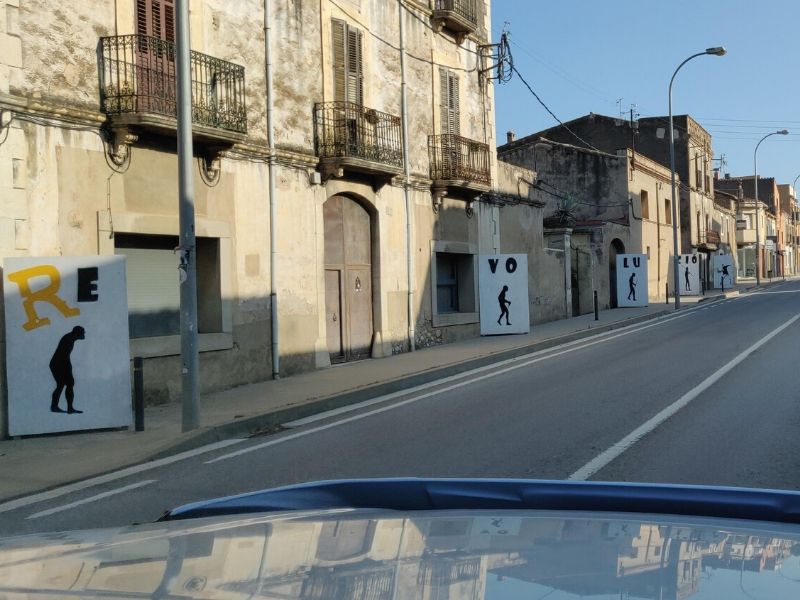 We ended the day's journey at the City Park Hotel Sant Just in Barcelona, a beautiful place with a private swimming pool. It was August 15, India's Independence Day. The next day was a rest day, so Honey and I drove into the interiors of Barcelona. Every crossroads had a circle with a huge statute in the centre, much like we have in the Fort area of Mumbai. The area looked like there was some sort of competition between old majestic architectural designs versus the modern tall buildings. The roads are broad, and a pleasure to drive on.

Looking for some lunch, we stopped by a restaurant, and landed in an urban slum. I barely managed to get my big Isuzu into the narrow, dirty lanes and found place to park. I sat in the car in case my big car would block traffic, and Honey went to fetch some food for lunch. Sitting in these dangerous-looking streets, I noticed that most balconies needed repairs. Some of the houses had leaking drainage pipes and overflowing garbage bins. What I saw next was disheartening.

A middle-aged man was going from bin to bin, opening up what ever he could eat out of disposed food boxes. A middle-aged lady was smoking and going up and down the street, talking on her mobile phone. She looked suspicious. I was right, as another lady, walked towards her and quickly exchanged money and some stuff. What stuff it was I do not know, and both disappeared within seconds. As the wait for Honey got longer, a stocky young girl came by and in front of my car, began hurling abuses at some person in an apartment. She would scream and I could hear a man's voice shooing her away. The lady was adamant. After a while, the person started throwing water on her from the top, and some of it rained on my car too. Her shouts got louder as a police car arrived. I was worried that they would fine me for parking on the small street, but they had come as the lady had called them. Within minutes, things quietened down. The drama was over.

On the plus side, the food was hot and delicious. After fuelling up, we headed straight for the hotel.

Barcelona to Morocco, AfricaWe reached the busy port of Barcelona by 6 am, the reporting time for the ferry to Morocco. The custom clearance officer did not speak a word of English (or chose not to) and had an argument with most passengers filling in the custom declaration form. One can get worried here, as the lengthy form is not in English. After a while, the officer helped me fill in my form. I had to pay 500 Euros to export my car out of the Schengen zone. I did not expect such a high fee, since there are no fees for motorcycle exportation. Every time I would complete a formality and come to the officer in charge, he would send me for another formality to be completed. It felt just like India.

The formalities took about four hours and finally by 10 am, we began to board the ferry. We were excited as the ferry had seven floors. It was scheduled to take 33 hours to reach the port of Morocco. By the time we settled down, it was lunch time. A buffet meal was part of our package, but turned out to be tricky. There was just one counter to begin with, so we had to stand in line for at least 45 minutes. The food looked delicious. After filling our plates, we had to bill it at a counter—here, they checked your ticket and told us that one can chose only one item from each section. Most passengers, including us, had to remove certain food items we had taken. It was quite embarrassing, but as most people had the same issue, we felt quite okay.

The ferry rooms were quite large, but not like the commercial luxury ones. We reached morocco at 3 pm the next day, and after completing the insurance, exchanging currency and custom formalities, headed for the capital, Rabat, some 300 km away. It is important to get local currency first.

By a pristine sea, it was a beautiful drive to Rabat. The toll roads are very good but the state highways are just okay. We reached Rabat by 10.30 pm.

The morning breakfast was a surprise: Msemmen were served with eggs to order. Msemmen can be called the Morocco paratha, made in exactly the same way as we do in India. We ate them in plenty and ordered more to have with our lunch.

Honey and I went out for a long drive while the others went to buy souvenirs. Rabat is beautiful, and the infrastructure is great due to the French-designed gardens. The army headquarters are noticeable, and have huge spaces along the city of Rabat. We visited the 12th century Hassan Tower and the mausoleum of Mohamad V. There are plenty of fruit markets in the old medina. Liquor is not served here, nor available easily.

We had an early start next morning, setting out at 4 am for the port. After the formalities, we got on the ferry by 2 pm, where there was chaos. Approximately 400 passengers had boarded the ferry without room reservations. They slept in just about any open space available. The room I had booked was not showing on their systems, and we ended up buying a room at 250 Euros. It was a regretful ferry journey back to Barcelona. The food was in short supply and the entire place was littered. We just sat in our rooms the whole time, waiting for Barcelona to arrive.

Barcelona to Calais, FranceIt was hot in Barcelona the previous night and all of a sudden, the temperatures were favourable in the morning. It was a long drive to the outskirts of Paris; the next day, we reached Calais port to board the ferry to the UK. There was only pizza to eat nearby. Tired after so many days of travel, the next day, we headed through some beautiful towns and villages for Calais. Calais is a port and indeed very beautiful, but expensive as many tourists flock the place.

15,319
Thank you for your comment, we value your opinion and the time you took to write to us!