India to London road trip, Part 3: The most dangerous drive of my life, in Nepal

After the earthquake, stretches of Nepal haven’t seen road repairs in years, making them extremely treacherous 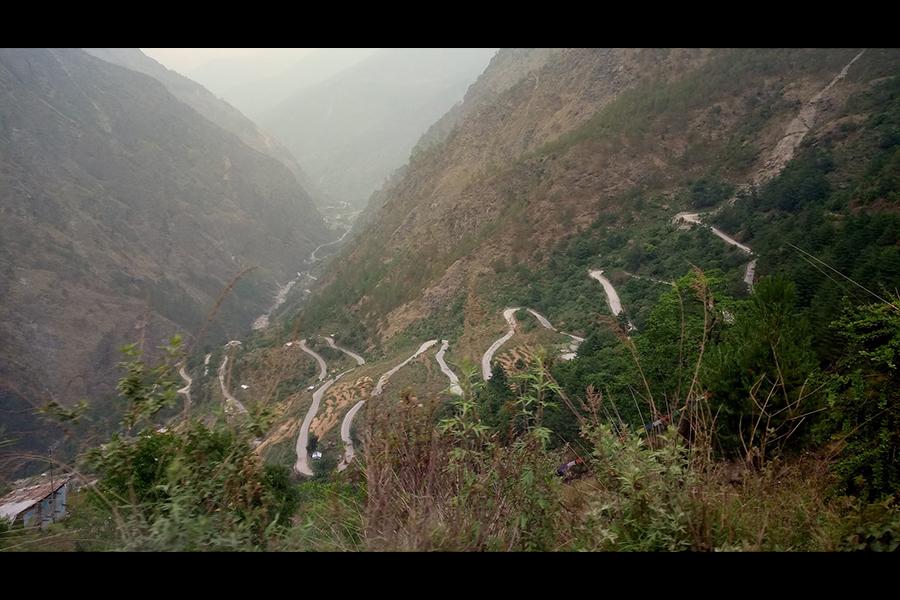 I go through a mental replay for days, of all the things I need to pack before the journey. We’re riding from India to London by road, through the Silk Route countries, with three KTM motorcycle riders, all women. To recap, the journey is designed especially for the Biking Queens of Surat, and the members of the team are rider Dr Sarika Mehta, rider Jinal Shah, rider Rutali Patel, mechanic Honey Desai, photographer Imtiaz Hussain and me, Kumar Shah, owner of the road journeys company, Ride Your Dreams.

I get a thorough check-up done of my new Isuzu, the backup vehicle I’ll be riding with. I tried to make a rack behind it for a damaged motorcycle, but eventually dropped the idea—the motorcycle length was more than the car’s breadth.The group encountered long stretches of treacherous roads on their way to Shyafru Besi, some of the most dangerous they have ever ridden on.

Packing for such a trip is an art, and I prefer doing it in solitude. Everything that will get checked most at border crossings needs to be easily accessible. Finally, I set out on May 31 at 11 am from Vadodara, Gujarat, onward to Varanasi. First stop: I met up with my classmate and his wife in Godhra, who have packed some food for us. Since the heat wave had begun, it was going to be very hot from Dahod. We reached Shajapur in Madhya Pradesh at 8 pm, which is about 465 km from Vadodara. Madhya Pradesh had few highway hotels, and fewer still with parking facilities.

Along the way, a curious traffic policeman stopped to question me after seeing the sticker on my car, how I would travel to London by road—aren’t there many seas to cross? I explained our route to him for 30 minutes, and went on my way. Eventually, we found a hotel in Shajapur with parking, three floors underground. Exiting this parking the next morning was quite a task.

The national highways cutting across Gujarat, MP and Uttar Pradesh (UP), are in good condition now. I faced traffic jams at crossroads, however, that delayed the journey by hours, especially in UP. On Day 3, we reached Lucknow for a flag off by the Chief Minister Yogi Adityanath. From here we headed for Varanasi for the final flag off. On June 5, we left for Gorakhpur, and faced really bad roads the whole way.

Onward to NepalWe began our journey from Gorakhpur to Kathmandu, early on June 6. The road from Gorakhpur to the Indian borer Sanouli border is fine, but the remaining route was treacherous. After immigration stamps and custom formalities, we crossed the Nepal-Bhairawaha border. At customs, three different officers had to intervene, since they had not seen a carnet a document that permits temporary import and export of non-perishable goods] for a few years. After we finally set out again, we got a flat tyre, which took a full 40 minutes to fix. Rain slowed us down in the last 130 km, and we reached our hotel in Kathmandu at 11 pm.

Surprisingly, I was given a room on the sixth floor of a hotel with no lift—we learned that hotels in Nepal’s Thamel, the main tourist area, do not have elevators. It was a tough ride for the Biking Queens after sunset, in the rains.

On June 7th, we visited the centuries-old Pashupati Mandir and Boudhanath Stupa. Both these places of worship are mesmerising, giving a feeling of calmness. I would love to visit them again with more time to spare. We also got information that the Kodari border from Nepal to China has been opened for commercial vehicles, so hopefully, we’ll see few trucks on our way to Rasuwa, Kerung border of Nepal into Tibet, China.

There are three borders that are now accessible to China from Nepal—Tattopani, Kerung and now, Kodari. This border was closed after the earthquake that shattered Nepal. Locals tell me that the cost of living has gone up by 150 percent after the earthquake, as the government has imposed additional taxes. A dish of the traditional Daal Bhat earlier cost us 150 Nepalese Rupee but now, it’s 250 to 350.

We set out for the sleepy village of Shyafru Besi on June 8; the last stop was 14 km before the border of Nepal and China. We reached Battar market by 1.15 pm for lunch. It was here that we decide to see if the weather was good to go.

It had rained for two days straight, and we had two options to reach Shyafru Besi. A short cut of 20 km involved a mud road, and the rains would have made it very difficult for the KTM 390 to ride through. I decided to take the longer path on locals’ advice.

The distance was short, but the terrain was almost impossible. After the earthquake, these roads have not seen any repairs except for essential joints in small bridges, and the entry and exit of villages. One has to ride or drive through to believe this terrain. I can say that this is the most difficult path I have driven in my entire life. I challenged the Biking Queens to ride through it, which they did, with flying colours. I salute their spirit and resilience.

The mechanic played a major role to help them through the journey. All of them took a few falls, but the bikes were not damaged, nor were the riders hurt, as speed limits were 10 to 20 km per hour. One of the bikes heated up and could not take the continuous climb, so we had to stop at regular intervals. With no rain on the way, we reached Shyafru Besi by 8.30 pm—it took five-and-a-half hours to cover the 46 km. We checked into a newly built Hotel Tibet, and were extremely happy that we completed the journey so far without injury or major bike damages. The Isuzu D-Max fared extremely well even with 840 kg of luggage load and three people in the mini truck. I thanked God for no rains and for keeping us safe all through.

4,134
Thank you for your comment, we value your opinion and the time you took to write to us!

Tweets by @forbes_india
Prev
India to London Part 2: Preparing for a vegetarian sojourn, and a shocking recce in Nepal
Next
India to London road trip, Part 4: Crossing into China