The Chinese border building is perhaps the largest in the world. It’s a national rule that no individual or tourist group can drive by themselves—there must be a local guide along, which also makes travel here very expensive 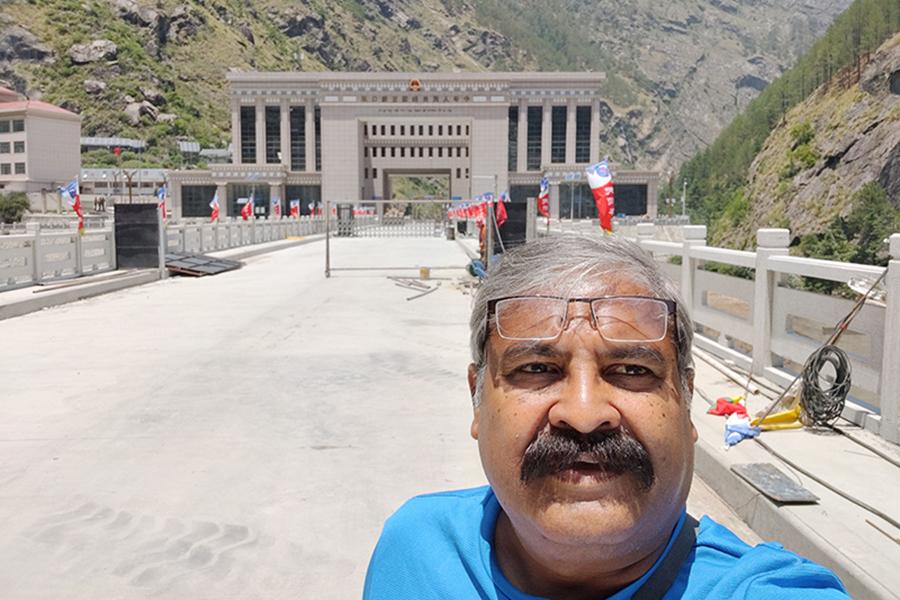 Kumar Shah at the Chinese border during his trip; he says the border building is among the largest in the world

Our journey for China began on June 10, after a day’s rest post the tough terrain ride. We rode via Shyafru Besi to the Nepal border, Rasuwa, which was a 14-km stretch of bad roads. While talking to a medical store owner, I was told that they are expecting the road from Galchi to Shyafru Besi to be restored in the next two years. The locals have accepted the lethargic pace of work.

The customs and immigration formalities took no time at the Rasuwa border, Nepal. After a cheerful send-off by the customs officer, we were about to reach the China border at 10 am, but were informed that the border has been closed for lunch and would only open at 3:30 pm. This happened as China is 2:30 hours ahead of India’s time zone.

In the meantime, we had lunch and I was pleasantly surprised to see a Chinese electric motorcycle. It looked tough and the seating was very low, presumably for short people. I wondered if it could take the bad roads of Nepal?

Contrary to our previous experience at Nepal border, the formalities took a very long time as they checked every little thing in our 840 kg of luggage. It was an exhausting process, unpacking, packing and then reloading the car. We were lucky that, that day there were no Mansarovar yatris, or it would have taken even longer.

Perhaps no border building in the world is as big as the one in China. It was a new world on this side of the road. I met my guide Tenzin who was quick to tell us what to do. He whispered to ask me not to open the boxes atop the car unless asked to do so. Overall, the customs officer checked 17 bags meticulously. I was spared from having to open my bags as I was the last person to be checked.

We were not allowed to click pictures 20 meters before entering China border and no amount of persuasion worked. Finally, at 3.45 pm Beijing time, we entered China. Most of the officers were soft spoken, except one who wanted to know what was tied on the top of the car. He cut the top cover, felt the tyres and let us go after he was convinced. Tenzin, a professional guide since 2003, was going to be with us for the most part of Tibet, in China, for the next 10 days. It’s a rule in China that no tourist group or individual can drive by themselves, which is also why travel through China is extremely expensive. The entire group has to move with the guide.

We started out for Gyirong from the border, keeping in mind that now, driving was going to be on the right side until we reach London, not on the left as in India. We met many Indians in Gyirong who had come to visit Kailash Mansarovar. I ate Tibetan food with the guide, and tasted the Yak meat and pork with vegetables that he had ordered. Then, I had Kumba chicken for dinner—mostly chicken diced into small pieces, with various cold vegetables thrown in, with Chinese Kotami (sticky rice).

The internet was missing and we tried to communicate with our families, but in vain. In China, Google and all the social media we use is blocked, and we all felt stranded. Honey Desai Imtiaz and I set out to buy a box of water and a bowl to eat the ready-to-eat food I was carrying. It was a task to find what we wanted, trying to communicate with store owners who just smiled back.

We were invited for a Gujarati dinner by the Yatris, who had brought their cooks along, but I skipped it. They sent us tea and nasta (snacks), which was really a good feeling. The night was difficult as a nightclub next door blared until 5 am.

Read the previous part of the travel blog here.

4,745
Thank you for your comment, we value your opinion and the time you took to write to us!