India to London road trip, part 9: Feeling like a king in Kazakhstan

Old biker friends made us feel extremely welcome in the country, where we also encountered a road from hell 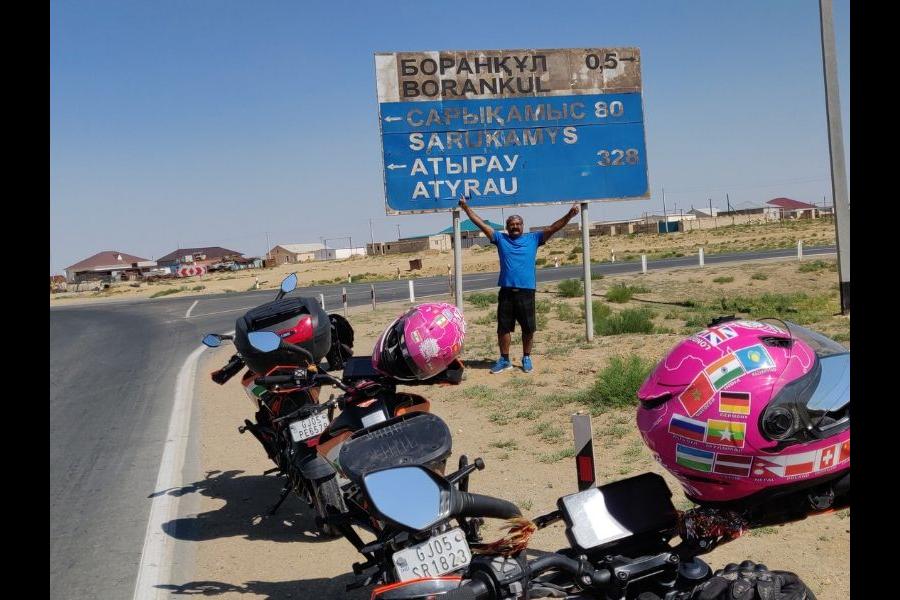 Border of Kazakhstan to Benyue: 93 kmsThis patch was the toughest through my road journey, dug up in all nooks and corners. In the past, it was hear that my Enfield’s rear suspension had broken into pieces. However, now, six years later, I thought the roads would be better. They were—except for the last 18 km stretch. That was like hell again.

There was no petrol available on the entire stretch, so I carried it in a can—something I hadn’t done through my whole trip so far. Petrol is called ‘benzine’ here. Even back in 2013, Benyue had gas stations, but no petrol available.

At one such gas station, we met Olga, a solo girl rider from Poland. She needed some help as her fuel container was leaking. I had an extra can, so Honey Desai, our auto technician, transferred her fuel into that and fastened all the stretch cords on her motorcycle. She left with a big thank you and took some photographs.

At the border of Kazakhstan there were no establishments selling vehicle insurance, so we had to locate one in Benyue. After a much-needed car wash, I went to three offices that sold vehicle insurance. The first one said they were too busy to help. The next two offices said they are unable to issue insurance for foreign vehicles. I showed them a copy of the insurance I had taken in 2013, but they refused. It takes a lot of time to find your way around a foreign country, where English is not spoken.

I went back to the hotel and found a guest who spoke good English. Upon request, Aidar came with me to the town centre, where we purchased insurance for all the vehicles in an hour. He told me if I had any difficulty in interpretation in Kazakhstan, I could call him any time. Aidar has worked in India for three years, and now works for private companies executing government infrastructure projects. That was very sweet of him.

Hotels in Kazakhstan don’t typically have elevators for 3-4 floor buildings, and the room phone is of no use to us as the reception staff don’t speak English. I noticed that all the hotels give a big square shaped pillow. However, it was not uncomfortable to use. 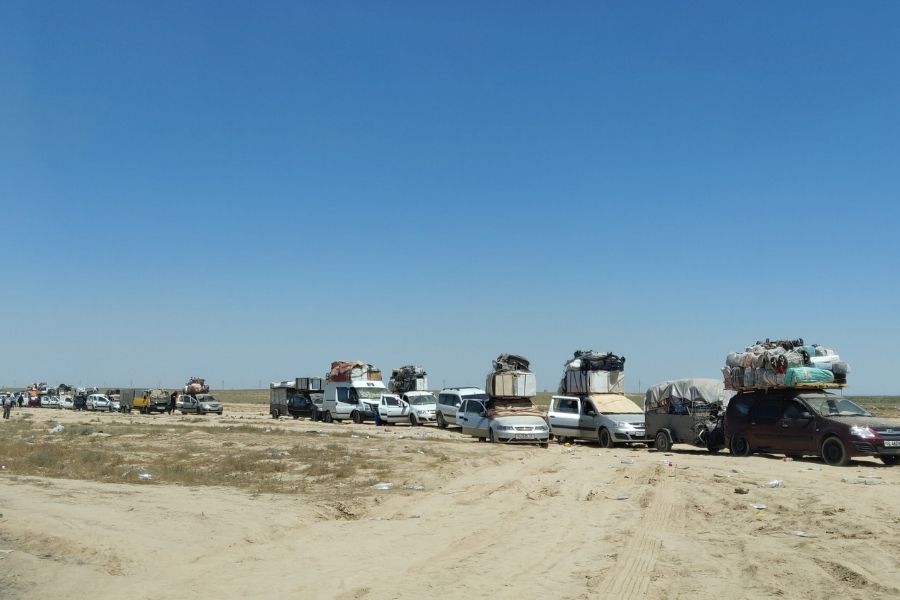 Benyue to Atyrau: 465 kmOur first halt was at Atyrau, 328 km. Along the highway, we saw many horses on both sides, some crossing our path too. The landscape featured a clear, blue horizon and arid sand on both sides, against black asphalt roads. We ate lunch at Kulsary city.

The road to Atyrau was very good, and we reached in good time. In the evening, 10 riders from the Wheel Brothers Motorcycle Club zoomed into the hotel on their super bikes. Alek, the president of the club, is a friend, and a very warm and considerate rider.

We had a lot to catch up on over dinner. Another rider, Almat, told me where to buy cheap but good motorcycles in Russia, and how he studied the laws of Kazakhstan and imported his motorcycle from there for a nominal fee. He said there is no law as of now on imports of motorcycles, as there are just a few in the country. We had a good get-together the first evening.

I explored Atyrau the next day with Imtiyaz, our group photographer, and took him to the famous Imangali Mosque. The mosque was partly under renovation and he was surprised to see that both men and women could pray here together, unlike in India. The famous Isatay Makhambet Square was also blocked for renovation. We drove past the monument of Kurmangazy – the great Kazak Composer of the 18th century. We stood at the Russian Orthodox Church, a shrine in Atyrau. The church is very beautiful with its golden domes, two large and five small ones. Forty km away is the ancient monument of Saraishyk, which I missed seeing.

In the evening there was a call from Alek, saying he wanted to meet the entire team for a short while. I was surprised as this was not on the agenda. I called the BQ team who had gone to the city, saying the Wheel Brothers were on their way to meet them. Alek and his team came at around 10 pm and congratulated the BQ riders for taking up such a huge journey. He was very impressed of their enthusiasm and spirit to ride. He presented the three BQ riders with the national instrument of Kazakhstan, called dombra. It’s made of hollow wood, wooden parts and has two strings. The riders were thrilled and thanked the Wheel Brothers in appreciation.

Alek presented me with the national dress meant for the nobles and prosperous, called kok ton, a fur coat made from blue cloth, covered with beaver skin. They sew tanned sheep skin together with wool on the inside. They also gave me an Aiyr Kalpak, a pointed upturned hat usually worn by the upper class. I had tears in my eyes. Alex announced that this gift is for ‘King Kumar’, not only a dear friend but a hard-core rider across countries. He told the team that they are lucky to have me. I had nothing to give Alek except for a cap with the logo of my company, Ride Your Dreams. Once again, I thanked him and his team, and with a heavy heart, we parted, wishing that we meet again in life. I did tell Alek that next year, I will be back with a bigger team; I hope my dream of a ride in 2020 comes true.

7,277
Thank you for your comment, we value your opinion and the time you took to write to us!