Can Narayana Murthy give Infosys its mojo back?

What would silence the critics is Infy's performance. Nothing short of Infy getting past Cognizant and breathing on the neck TCS. Will that happen? 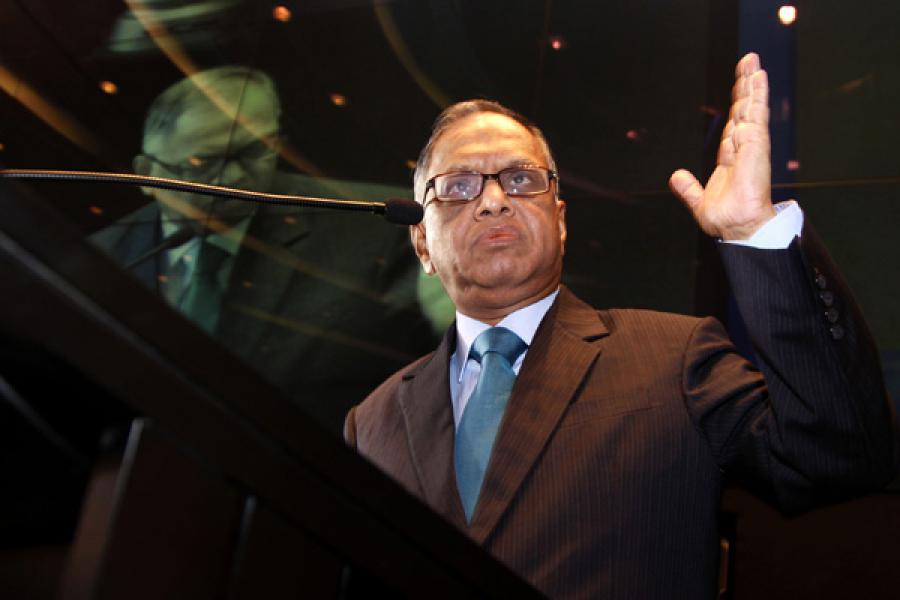 The right question is what exactly can we expect NR Narayana Murthy to do in his new role?(Photo: Getty Images)

Infosys often talks about, and even prides itself on its sustainability, profitability and predictability. Yet, few observers would have predicted that Infosys will make an announcement early Saturday, saying NR Narayana Murthy would be back in an executive position at the company he founded 32 years ago. (Even Narayana Murthy said in a press conference later that he did not imagine in his wildest dreams that this would happen).

This was supposed not to happen for many reasons. The foremost among them is that Narayana Murthy himself had set a rule that no founder would hold an executive position past 60 years of age and would step down from non-executive positions after 65. Mr Murthy is the kind of person who would say such things as a matter of principle, and people would believe him. (When Satyam scandal broke out and IT companies were looking to buy its assets at a cheap price, Mr Murthy called it a tainted company and that Infosys wouldn't touch it. It never participated in the bids, even to get competitive information, a tactic that some of its rivals indulged in.)

Yet, that surprise vanished soon because everybody in the trade knows that Infosys is in a bad shape these days. Its revenues have been sagging, its margins are getting squeezed, its attrition rates are high and its employees' mood is low. Analysts are flogging the firm, stock market has been giving the company its thumbs down for sometime now. All these its bigger rivals are doing better and getting even bigger. It lost its IT bellwether tag to TCS, and the second rank in the market to Cognizant in the last one year. The only excitement in the market these days is around the speculation on who the next CEO will be, as if nothing good can be expected from the current set of leaders.

KV Kamath, non-executive chairman of Infosys, told in a hastily convened press conference today that the board took feedback both within and outside the company before it approached Narayana Murthy in early May to ask him if he would take up the role of executive chairman. Murthy replied he was always a soldier of Infosys and that he would accept the offer. Murthy is set to take on the role formally next Thursday. He would set up a small team for himself and that team would include his son Rohan Murty, a PhD in computer sciences from Harvard University. Rohan would be his executive assistant. And in doing this, Mr Murthy broke yet another long standing, and often articulated principle - that the children of Infosys founders would never take up jobs at the company. Murthy said, Rohan would be taking a salary of just Re 1. But that is unlikely to silence the critics.

What would silence the critics is Infy's performance going forward. And nothing short of Infy getting past Cognizant and breathing on the neck of TCS. Will that happen? That’s an important question, but not exactly the right one at this point.

The right question is: what, exactly, can we expect NR Narayana Murthy to do in his new role?

During the press conference and later during the interviews to television channels, Narayana Murthy resisted answering any question about his diagnosis of Infy's problems or the solutions he may have. For the first, he said he was away from Infosys during the last few years and out of executive role even longer. For the second, he said humility demanded that he spent time to understand what exactly was happening before coming up with any idea.

He defined his role as 'adding value to Shibulal and Infosys'. Adding value, he explained, would come 'in terms of ideas in discussion and debates in arriving at optimal decision; in helping the CEO implement those decisions with a sense of alacrity'; and generally 'in enhancing excellence'.

That’s a broad definition of adding value. We believe he would add value in three ways.

Articulate and tweak Infosys 3.0 strategy:
While Infosys has designed a good strategy in Infosys 3.0, the big problem was in communicating the strategy across the layers of the company. While reporting on a recent Forbes India story on this, we found that several people both within and outside Infosys had only a vague or a partial understanding of what exactly Infosys 3.0 was. The most common misperception was that Infosys 3.0 was all about products and platforms business.

Narayana Murthy's big contribution would be in articulating this vision better. While there are leaders who are good at communication and even persuasion, Murthy’s talent goes beyond salesmanship. His strength is in articulating a vision in such a way that makes people realize that it’s enormous and achievable at the same time.

But, Infosys 3.0 also needs some tweaking. It’s not a simple strategy. And the way it was structured led the second level leadership to drop the ball on the core 65% of Infosys business - of application development & maintenance, software testing, infrastructure management, business process outsourcing - and focus too much on transformational business. One can bet on Narayana Murthy to cut down the complexity and make it easier. (He sometimes forces journalists to repeat a long-winded question in a more simple fashion - and the resulting clarity can often be revealing. Simplicity is an important tool in board rooms)

Turn the mood upbeat
It’s no secret that morale within Infosys is bad, not because there were drastic changes in HR policies. There were some, but the primary cause of unhappiness is financial under-performance. Studies point out that it’s good financial performance that leads to happy employees and not the other way down. In case of IT companies, low growth directly results in bigger bench. Infy's growth is slower than the industry growth and those of its peers and it is getting beaten by analysts and stock market. This reflects on the way employees look at the leadership. According to Glassdoor survey, Shibulal's approval rating is the lowest among its peers.

Even so, a charismatic leader can turn the mood upbeat - by changing the lens people use to see the events. Given Narayana Murthy’s reputation, he might just be able to do that.

Give back growth focus to Infosys
The clearest sign that Infosys was falling behind came when Cognizant overtook Infosys. And the clearest sign of Infosys getting its mojo back will happen when Infosys overtakes Cognizant. Right now, Infosys is growing slower than the industry. Even if it equals industry growth, it cannot beat Cognizant, because Cognizant is growing faster on a bigger base. The only way Infosys can beat Cognizant in the short run is through inorganic route - that is, by making acquisitions. While KV Kamath would have done a great job here, Narayana Murthy comes in with two badges that Kamath never had - that of a founder, and more importantly, the position as executive chairman.

Murthy could well be at the helm of the next big acquisition that Infosys does. (At a recent analysts’ meet, Infosys said it is willing to make acquisitions to the extent of 10% of topline). If Murthy pushes the right levers for growth, on the top of a couple of acquisitions, how stakeholders within and outside perceive Infosys would have changed before anyone realizes.

A former journalist remembers Murthy telling a young Infosys executive several years ago that ‘perception is as important as reality’. "That kind of defined Murthy for me," he told me.

It’s not perception from a public relations angle. It’s perception as Luc de Brabandere defines it. In an interview to Economic Times in 2009, de Brabandere said, “We believe that to really make change happen, changing the reality is of course necessary - this involves developing novel ideas for change, and the implementation of those ideas via project management and measurement, templates and the like. But changing reality is not sufficient - we must also change peoples' perceptions .

This happens on much more of an individual basis; each stakeholder's needs and biases must be taken into account. This can only be done through careful preparation and communication . So to really make change happen, we must change twice - reality and perception.”

Murthy’s most important contribution to Infosys will come from doing that.

5,951
Thank you for your comment, we value your opinion and the time you took to write to us!