H1B Visa Norms: What's good for IBM need not be good for America...

.. and certainly bad for Indian IT companies.

As US senate debates the H1B visa regulations, there’s a big question its members will have to face: some of the proposals are good for its big tech firms, but are they good for American engineers?

If you look at IBM, one of its most iconic brands and a company that Warren Buffett, who after years of resisting technology investments, recently placed his bets on, the answer is ‘probably no’.

Before we go into the reasons, here’s a quick background.

It’s no secret that IBM has been competing with Indian IT Services firms for several years now. It started at a time when Indian IT companies such as TCS, Infosys and Wipro seemed even more threatening to global IT services giants (such as Accenture and EDS, besides IBM) than they do in the post-financial crisis era. A lesser company would have seen only the threats, but IBM saw a big opportunity. It put its full force behind its India strategy. Today, not only does it have a huge presence in India, it made its local rivals kick themselves by discovering the domestic IT services opportunity ahead of them.

Now, of course, its local rivals have a new reason to worry about. In the last few months, save the tale of two Murthy’s - one was shunted out of a company he transformed and the other was pulled back into the company he founded - no other issue dominated the discussions among tech executives as much as the new visa proposals by Gang of Eight. It’s clear that at least in the short run, Indian IT companies will be the losers. Among other things, it will increase the visa expenses by three to five times (based on H1B dependence) from around $2500 per person at present; companies might have to pay more for the H1B visa employees; and over time employ at least one local for every H1B visa holder. Kotak Securities reckons that the new regulations would hit the margins by at least 1.85% in five years on account of local hiring and another 1.5%-2% on account of onsite utilization rates. In all, it could have an impact of 3-4% impact spread over five years.
In the short run, it’s also a zero sum game, and one person’s loss is someone else’s gain. That gainer would be big companies like IBM rather than the engineers in US. For three reasons.

One, even as IBM has been increasing its headcount in India, it has actually been cutting down its headcount in US. Here are two graphs with numbers courtesy media reports and Alliance, an IBM employees union. 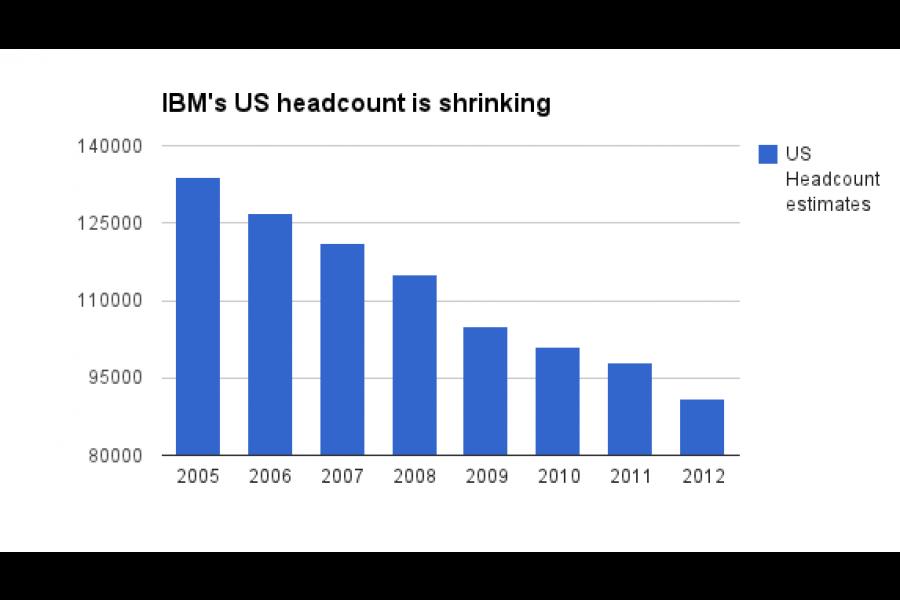 Two, this trend is likely to continue because IBM has been struggling to increase its revenues but in vain, and the only way it can make the investors happy is by increasing its profit margins. And getting more things done out of India is a good way to shore up the margins. Three, it’s not clear if curbs on H1B visas for IT companies will address the unemployment problem in the US, or impact wages. The unemployment rate among software engineers is at 2.2% against overall unemployment of 7.6%, points out Som Mittal, president of Nasscom. It’s even lower than natural rate of unemployment of 5-6% . Besides, H1B Visa holders get paid more than locally hired employees, according to a Brookings Institute analysis.
--

Warren Buffett, who recently invested in IBM, often uses the metaphor of Castle and Moat. “I don’t want an easy business for competitors. I want a business with a moat around it. I want a very valuable castle in the middle and then I want a duke who is in charge of that castle to be very honest and hardworking and able. Then I want a moat around that castle. The moat can be various things: The moat around our auto insurance business, GEICO, is low cost.” If these proposals become a legislation, it will definitely be a big moat around its business. But, it’s not clear if it will do anything to increase employment in the US.

16,083
Thank you for your comment, we value your opinion and the time you took to write to us!

Tweets by @forbesindia
Prev
Twist in the Tale: GM crop adds to Food Security
Next
Environment Apps for Children