It can be termed as a major milestone on the super highway that we call globalization. By its own admission Philips achieved that yesterday. Launching a brand new product segment with a suite of products, from India for the global market, is nothing short of a gigantic leap for any multinational company. For the longest while, and in this case for several decades given that Philips came to India much before the Independence, multinationals have considered their captive R&D centres in India as in-sourcing destinations. Internally, the common lingo is: Indian engineers can’t be truly creative…they do what they are told to do…are good at building sub-systems but can’t build an entire product, and so on. That perception may now need a dose of reality check.

Using the expertise of its nearly 2000 engineers at Philips Innovation Centre (PIC) in Bangalore and three other R&D sites in India, and aligning the marketing and sales teams with them, the Dutch electronics company in India has launched a complete set of products that also create a new segment under its Critical Care Unit. It is branded as Philips Efficia and consists of infant Warmers and Incubators and a sophisticated, first-of-its-kind, respiratory device - NeoPAP (neonatal continuous positive airway pressure) delivery system. It may not be easy to fathom the huge leap of faith that Philips has shown in launching this from Bangalore given that the primary market for these products is in this region but people who've worked long here say it’s  a big deal. 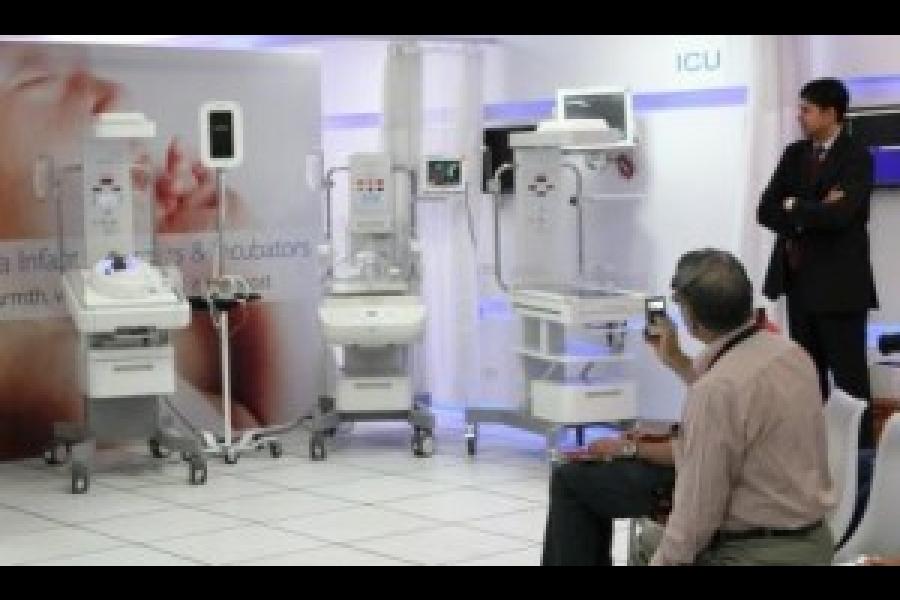 The new products that Philips has designed and developed in India

I find it particularly interesting because I’ve followed this over the past few years. To understand let’s step back a few years.

In 2010 when I met the then new chief executive of PIC, Wido Menhardt, he said he wanted to bring the Centre close to the sales team. If not unusual, it’s not very common either. Engineers and sales people anywhere don’t quite share a cozy relationship. Then in 2011, he said he was making progress. Last year, in 2012, we saw the beginning. A few products, including two new portable ultrasound machines were developed locally to be marketed globally. (You can read the earlier posts here.)

In 2013, all those efforts have culminated in a bigger launch, of a whole new segment. The competition, big and small, may already have some of these products in the market, but Philips is priding itself in providing a “platform”, the full continuum of care. GE, which made a splash a few years ago with its low-cost warmers in India, may need to sit up and watch as Philips says it’ll price these products, their variants at least, very competitively. To the extent that even government primary health centres can afford it. (We’ll get to the price war story, if any, after July when the products hit the market.)

The idea here, says Krishna Kumar Ananthasubramanian, President, Healthcare, is to replicate the strategy Philips adopted in Cathlabs. Today Philips has the lowest price as well as the highest price Cathlabs in the world, he says.

As the team unveiled a slew of other products, from Automated External Defibrillator to solutions in “connected cardiac care” (instant stent visualization to data sharing platforms), it was apparent that the company has been shedding its image as a stodgy electronics company.

Menhardt clearly stayed away from the “white-space trap” — that known barrier to innovation where ideas fall between the cracks of organizational structure, when companies simply let go of ideas if they fail to fit in the existing structure or process.

All this has also helped PIC Bangalore to be squarely placed at the top with two other R&D sites in China and Eindhoven, the Netherlands. Three years ago there was no lighting work being done in PIC but today teams here are directly contributing to its most-talked about product, Philips Hue bulb.

The fact that the company has launched 33 products in last 18-24 months speaks for the change, and that finally “innovation” (the much misused and confused word today I must add as people use it even for adding nuts and bolts to a device) is paying off. And there’s cutting edge technology at work here which may not be noticeable at first sight. Take for instance, BiliChek, the first-ever non-invasive bilirubinometer which uses transcutaneous sensors to test and manage jaundice in infants. Nearly half of the newborns are affected by neonatal jaundice in the first weeks of their life and they need to be pricked several times to get their bilirubin checked. The “Kangaroo Care” concept in the Warmer, which allows mothers to hold the baby while phototherapy is on is cool too! The NeoPAP, the respiratory support solution for neonates is the first non-invasive solution for respiratory distress in the world.

Managing director Rajeev Chopra is visibly pleased. Philips is “number one” company in lighting, healthcare and personal care, he says. He wouldn't give the latest numbers as the annual report is due in September, but says he is “happy at the growth rate of all these segments.”

Menhardt’s frequent trips to the headquarters, unlike his predecessor who traveled once a year, has brought results. He promoted “intrapreneurship” and, more importantly, didn't wait for the ‘headquarters’ to perennially evaluate ideas and decisions, which as many former MNC executives will tell you, is the common practice.

As I said last year, the annual PIC day is also Menhardt’s report card day. What do the grades look like? Mostly A’s I’d say, going by what some of the executives did not say. Yes, you heard it right. More, and perhaps bigger, new products to be announced next year!

Will Wido Menhardt be there to showcase them? That no one is talking about, not even the man himself.

9,283
Thank you for your comment, we value your opinion and the time you took to write to us!