Social media: Too powerful to tame, too big to ignore

Social media, the prodigy of the fourth industrial revolution – digital transformation has disrupted the way communication is perceived, understood and managed 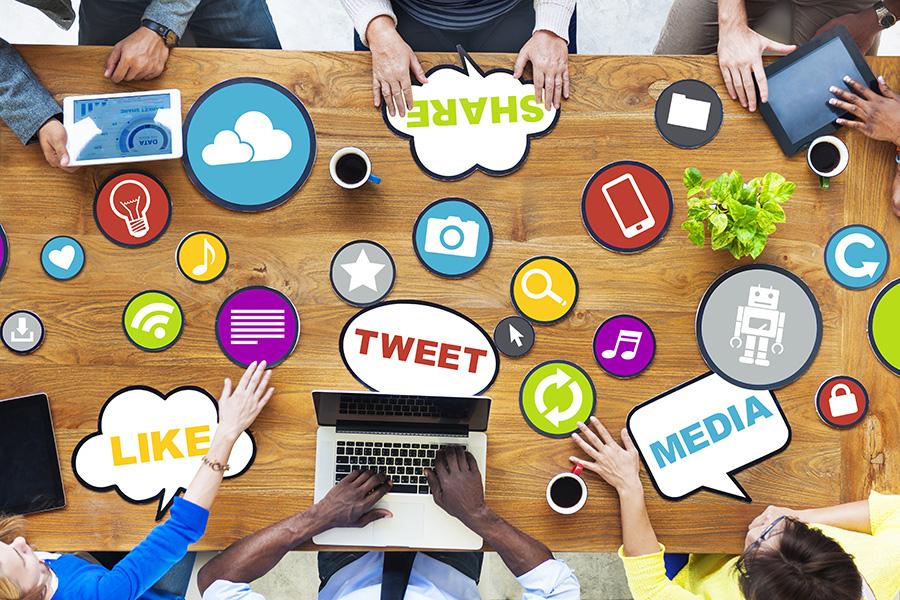 Technology has democratised the world order and the realm of communications has not remained untouched either. Social media, the prodigy of the fourth industrial revolution – digital transformation has disrupted the way communication is perceived, understood and managed. If the governments, celebrities, organisations and politicians have used the communication tools with a mostly top-down approach; social media has turned it 360 degrees adding extensive bottom-up, cross-share approach. In nanoseconds, the world could read, react, share and comment on the gigabytes or terabytes of content.

For communications professionals, it was no easy feat to incorporate social media into the communications offerings to drive business campaigns. Organisations shied away from the intimacy it brought with the audience and the degree of exposure it demanded from its users. Erstwhile, communication tools gingerly guarded the messaging and its impact, but social media would do with nothing less than breaking all the barriers, proposing limited solace in scanty regulatory controls.

Want to communicate?“Be where your audience is” goes this basic principle of communications. Businesses had to yield to the audience, which lapped up the addictive, no-holds-barred communications style of social media. The surge in the popularity of social networks is phenomenal, shrinking the Six degrees of separation further to four or so, even as the new social media technologies are bursting on the scene every alternate day. This means any two people on planet earth are just four-five connections away, thanks to the power of social networks. But what does that connection translate into? Evidently, the Three Degrees of Influence theory a decade ago postulates the belief that our actions on social media ripple through our network and impact our friends and friends of friends, and so on.

It does not take long to fathom that if social media is too powerful to tame, it’s also too big to ignore. With millennials and Gen Z being social natives (and they being touted as the biggest pie of the world population in coming years) – businesses, organisations, governments, celebrities had to cross the threshold of fear to follow them in the social media world.

Social Media – Opportunity like never beforeWhile naysayers are busy painting the doomsday picture, social media advocates in the communications circle believe that if used judiciously and strategically, social media could be the best media communications tool the world would ever witness. Here’s why: 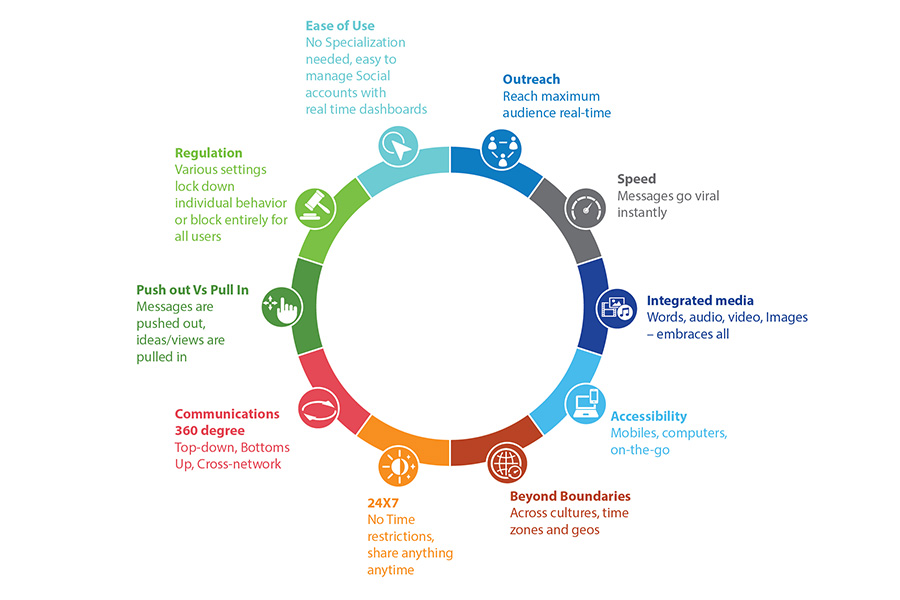 Social media enables content-sharing hosted on other platforms too. So, any videos, content, blogs, audios can be further promoted through this medium.

Not another brick in the wallThese features could help organisations achieve various business objectives through following social media platforms: 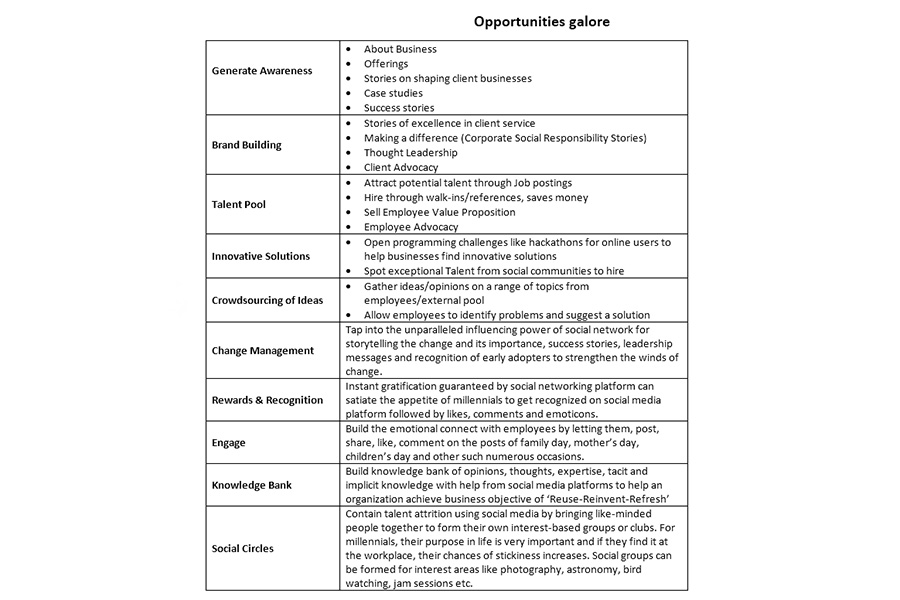 What’s next?Social media has already covered significant ground through ambiguity and volatility since its inception until now. Next, the proliferation of various social media offerings catering to various masses and needs will see consolidation and integration in future. Technology runs through the hype cycle and social media products have a shelf life too. New products are popping up on the scene and rising up the popularity charts before witnessing stagnation as the novelty factor wears off and decline (currently experienced by Facebook). Furthermore, Facebook acquiring WhatsApp, LinkedIn by Microsoft, YouTube by Google show that organisations on the top are proactively predicting the future and investing in it through strategic acquisitions. Integration of multiple platforms will usher in an era of a seamless experience for end users.

(Did you know? Organizations like Google consider toothbrush test for acquiring future products).

The content format will also undergo a transformation as the shrinking attention span and the onslaught of free-flowing information will bring User Interface/ User Experience (UI/UX) to the forefront. Storytelling through visualization for quick consumption using visual cues would dominate the content scene.

As digital transformation will bring about more technological advancements, organisations will be able to draw more tacit insights from the participation of the audience on these platforms through analytics, deep learning etc. Ethical usage of this information could help organisations to capture sentiments, knowledge, opinions, and would get recommended interventions too to address concerns if any.

Would end users get a raw deal then? Not really. Cambridge Analytica, episode has shown an unseen benefit as the world is talking more than ever about fake news, fair usage and ethics around gathering insights using technology. It will lead to a choice between free services (free lunches with strings attached) versus paid services (ensuring secured data). Legal aspects will also kick in to change the dynamics of data security as the effects of General Data Protection Regulation (GDPR) are tricking in and the world is watching with betted breath.

Interesting developments are on the anvil in social media space as it is entering yet another phase of maturity curve through ambiguity and volatility. Stayed tuned to see what unfolds.

The author is a Practice Lead- Internal Communications at Infosys BPM.

5,470
Thank you for your comment, we value your opinion and the time you took to write to us!

Tweets by @forbesindia
Prev
Smartphone patent wars: No end in sight
Next
The business value of enabling IoT in industrial manufacturing