The Mystery of the Damascus Sword and India's Materials Heritage

In this blog, I would like to tell you the story of carbon steel and the India connection. Carbon steel is the most used engineering material today and accounts for 85-90% of steel produced worldwide.

To tell this story one must start at Salaudin and Richard the Great facing-off during the crusades.  It is said that Richard the Great cut through a tree trunk with one swipe of his sword to show his might and the capability of his sword.  In response, Salaudin is purported to have just tossed a silk scarf into the air and let it slide off his blade’s edge, cleanly cutting it into two.  Richard recognized that it was indeed a great sword that could cleave free falling soft material without the use of any force.  Salaudin’s sword was known to be a Damascine sword.

There is now a general agreement that the Damascus steel which made its way into the western world through the crusades was produced in India rather than in Damascus.  This steel was known as Wootz steel, potentially derived from the word ‘ukku’ which means steel in Telugu and Kannada.  Damascus swords were known to be extremely hard and flexible to the hilt and able to cleave a free-falling silk scarf or a block of wood with the same ease.

A good person to talk to on this subject is Sharada Srinivasan.  I first met her when her father, Dr. Srinivasan, retired director of the Bhabha Atomic Research Center, gave a talk at my invitation to the GE Global Research team at Bangalore.  I was surprised to know that a field such as archaeometallurgy existed outside of Indiana Jones movies.  Sharada has a Ph.D. in this area, and has worked on topics such as the pancha-loha(five metal alloys – traditionally described as alloys of gold, silver, copper, brass, and iron used in South Indian metal sculptures), and Wootz steel.  In her paper on the topic, she concludes that high-grade ultra-high carbon steel was indeed produced by crucible processes in South India.

Verhoeven et al. have researched the topic of Wootz steel indepth including the question as to why the art was lost.  Verhoeven et al. conclude that in order to produce Wootz quality steel, a smith had to fulfill three conditions:

“…with time, the smiths who knew about the technique died out without passing it on to their apprentices (since it no longer worked), so even if a similar source was later found, the knowledge was no longer around to exploit it.”

In addition to carbon steel, there are several examples of India’s leadership in material technologies including cast steel used for Tippu’s rockets and nano-silver used to cover Indian food items.

Roddam Narasimha is a walking encyclopedia on India and Indian technology.   The Caltech Aerospace Ph.D., career academician with the Indian Institute of Science, who is the past director of leading Indian research organizations such National Aeronautical Laboratories and National Institute for Advanced Sciences, has a balanced approach to looking into the past Indian technical accomplishments.  As he says , “Indian scholars have tended to take extreme positions of either saying all that is of technical value came from the West or, at the other end, that all that is accepted as science today came from India.”  He himself has spent good amount of research effort on answering what he calls ‘Needham’s question’:

With the appearance on the scene of intensive studies of mathematics, science, technology and medicine in great non-European civilization, debate is likely to sharpen, for the failure of China and India to give rise to distinctively modern science while being ahead of Europe for fourteen previous centuries.

Roddam has studied in great detail what could be the single indigenous development in India during the early days of the Industrial Revolution in Britain – Rockets.  Tippu Sultan and his father Hyder Ali - rulers of the Mysore state for a period in the 18th century - were known for their ability to lead armies to victory.  A key element in their victorious escapades was the use of rockets.  There were three elements of innovation to their use of rockets.  First was the use of high quality Indian steel, which allowed one to pack in a lot more gunpowder than would be possible with lower quality steels (more a testimonial to Indian Iron ore than to the processing); second was the use of swords as stabilizers which as the rocket flared into sky and descended on the enemy tended to come down sword first causing severe injuries; and third was the use of several rockets in unison with launch angles computed to cover the enemy ranks with massive concentrated rocket attack.  This rocket attack caused the enemy ranks to wither away in the face of a humiliating defeat.  Roddam describes an incident from the fourth Anglo-Mysore war of 1799, where Col. Wellesley (later the Lord Wellington) and his troops were badly beaten back at Sultanpet.  Roddam quotes a young English officer’s journal thus:

The rockets and musketry from 20,000 of the enemy were incessant.  No hail could be thicker.  Every illumination of blue light was accompanied by a shower of rockets, some of which entered the head of the column, passing through the rear, causing death, wounds, and dreadful lacerations from the long bamboos of twenty or thirty feet, which are invariably attached to them.

It is also known that William Congreve exported the Indian rocket technology and further developed it into what are now known as Congreve Rockets, which were successfully used in later wars by the British.  Roddam also concludes that the success of Congreve’s improvements was due to the understanding and application of Newton’s laws of motion and systematic approach to research.

Currently nano silver is being used in microcidal applications from washing machines to wound healing.  For the longest time silver beaten into thin sheets has been used on our sweet meats and on pan (betel leaf with various admixture inside).  I picked-up a few sheets of these silver foils to verify their nanostructure and the results from transmission electron microscope analysis verify the purity of silver (very few precipitates high in carbon) and the existence of a nano microstructure with severe deformation.  Current research points to the anti-viral, anti-inflammatory, re-epitheliazation, and anti-hemorrhagic properties of silver in its nano form.  It is really interesting that the way silver gets its nano structure in this case is by taking normal metallic silver and pounding it (traditionally between animal intestine layers) to its nano form!  This age-old knowledge from India is luckily not a lost art, and is being rediscovered by the scientists of the new millennium. 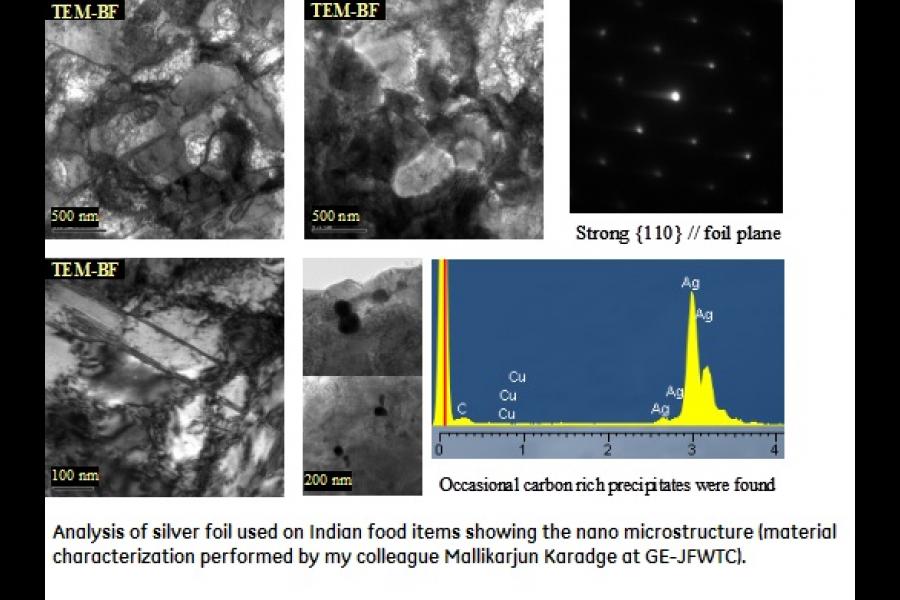 Applying new sciences or new materials for the health and comfort of humankind is the story of engineering progress.  Harnessing materials directly by humans predates the emergence of science, as we know it today.  One of the markers of progress of a society has been its ability to work metals and its alloys.  Today, we have come a long way in materials advances.  Recently a friend’s son had an accident and ended up with a decent size cut on his head.  Not too long ago, this wound would have been treated with 4-5 sutures.  Not anymore.  Doctors used a liquid adhesive to close the wound!  The liquid adhesive forms a microbial shield while the wound heals without the use of a needle.  Materials research does take a long time, but research from the last several decades is now bearing fruit and becoming useful applications:

As we move forward, India has every opportunity to develop leadership in materials and use this to solve tough problems in healthcare, energy and transportation for India and the world.  A particular focus, in my opinion, should be composite materials.  Driven by the use of composites in the Indian aerospace industry (rockets, satellites, missiles, light combat aircraft, advanced light helicopter), we have fairly mature capabilities in the area of composite structures.  Technical assistance and soft loans from the Technology Information Forecasting and Assessment Council (TIFAC), a unit of the Department of Science and Technology as well other government initiatives are in the right direction to enhance India’s capabilities.  Joint ventures and global collaborations are now required to ensure India works at the leading edge of the technology and gets better at raw material development while further strengthening the applications end of capabilities. It will be great to aim for a century of Indian materials.  Remember the Damascus Sword!

21,546
Thank you for your comment, we value your opinion and the time you took to write to us!