Today in Tech: Indian IT in global rankings; Infosys 3.0 Vs Cognizant H3; Wozniak on Apple

Indian IT in a bigger canvas The most interesting thing about a table that Gartner published yesterday is not that Indian IT sector growth slowed down (in fact, the new normal is no longer called the new normal); it's certainly not that Cognizant has replaced Infosys as number 2 in terms of revenues (that inevitability happened early last year), but it's in two sets of figures that place IT in the global context. 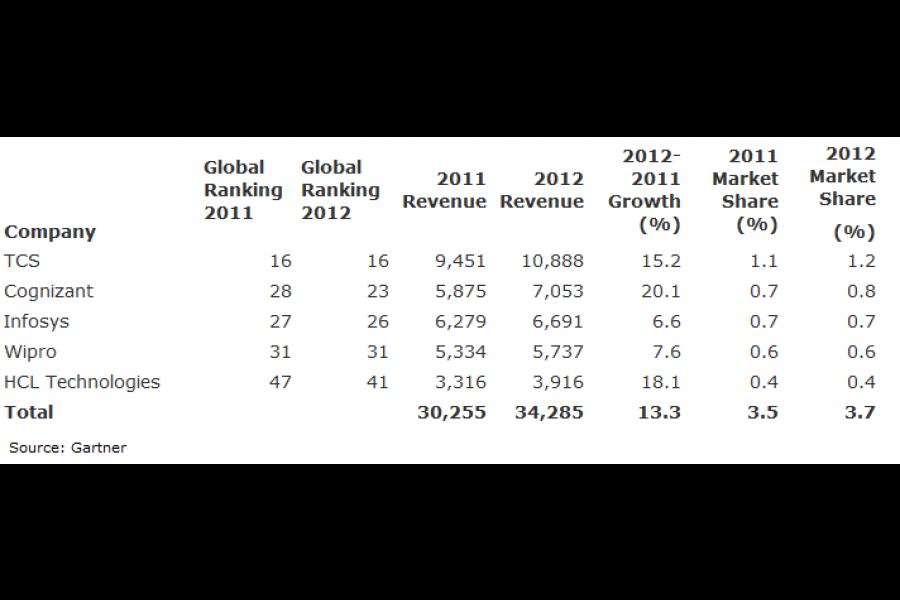 One, the top five Indian IT companies account for just 3.7% of IT services market. And even 13% growth against the industry growth rate of 2% has increased its share by a mere 2 basis points. It grew from 3.5% to 3.7%.

Two, it's tougher at the top (as in any running race). HCL Tech which grew at 18.1% moved up 6 places in the global ranking, and Cognizant, which grew faster at 20.1 on a much higher base, moved up 5 places.

Three, despite the negative perception, the ranking of Infosys has actually improved, and it retains its global market share. For HCL Tech, which has been impressing the market like none of its rivals could, that share hasn't changed. For answers, you should not look at growth numbers, but at incremental revenues. In terms of incremental revenues, HCL Tech made $ 188 million more than Infosys.

How Infosys 3.0 is different from Cognizant's H3
My story on Infosys in the recent issue of Forbes India (Did Infosys get it wrong with 3.0 strategy?) argues that the reason for the company's difficult times these days doesn't lie so much in its lack of hunger for acquisition or the salesmanship of its CEO, as it's on the the nature of its new strategy. Implementing 3.0 took the attention away from scaling itself up and towards building tomorrow's enterprise for client. The one uniform question I was asked during the discussions that followed the publication of the story is this: Aren't others getting into products / platforms? Aren't TCS and Cognizant, which were also restructured, doing well? A good way to think about the difference is this. Congnizant H1, H2, H3 is structural. Infosys 3.0 is chronological. (So, at Infosys, contrary to what many people believe product and platform is not Infosys 3.0, it's only one part (and presently a very small part) of Infosys 3.0. The image in the left represents the key difference.

The promise of this strategy was that it will make Infosys both revenue and margin leader - without having to compromise on pricing, without having to make risky acquisitions. But, it's also more complex than what others did. In fact, one would argue, TCS and Cognizant simplified the structure, while Infosys tried to align it with a much more complex reality. Check out the story, and let me know what you think.

Steve Wozniak on Apple
Over the weekend, I read this in an Engadget interview with Steve Wozniak

Which company does the most to push the industry?
You have to be kidding. Apple leads the way. A bunch of companies could be like an ocean of products with waves and ripples. But Apple is an Everest. The day Apple introduces a new product you know it's not the same as before and you know it's the future for everyone. More...

And, today Reuters reports:
Apple Inc Chief Executive Tim Cook said on Tuesday he expects the iPhone and iPad maker would be responsible for "several more gamechangers" and that wearable computers could be the next big thing. More...

20,400
Thank you for your comment, we value your opinion and the time you took to write to us!