What if Umbrellas Could Generate Solar Power?

Imagine an umbrella functioning as solar concentrator, funneling the energy to its stick from where you can charge your cell phone? Or, even power a few other basic electrical devices, or run a tiny fan as the accompanying picture shows. 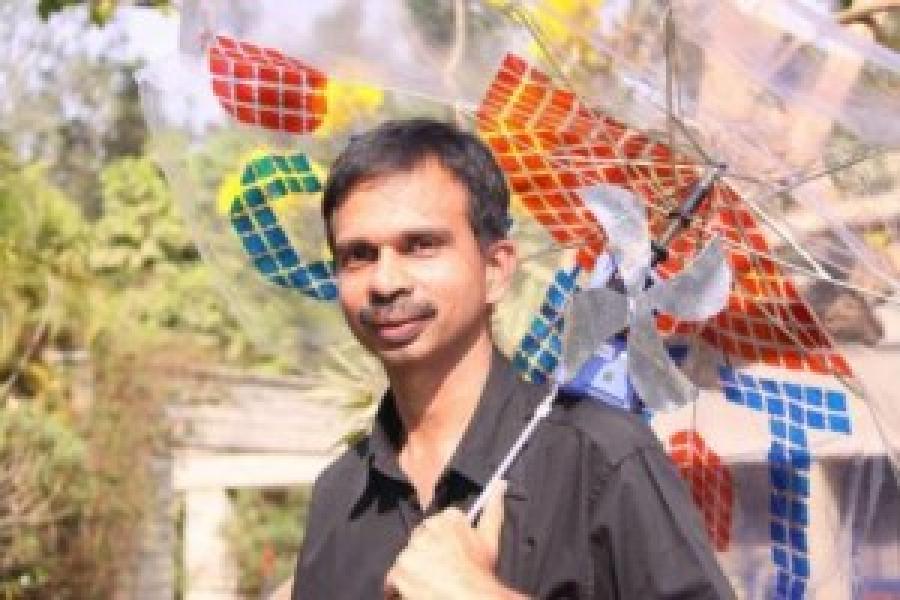 This may sound gimmicky but the scope that organic photovoltaic cells offer for inexpensive, portable and decentralized solar power generation is enormous. The US military has already built tents that generate solar power – where solar cells are integrated with the canvas -- and remain as foldable and flexible as always.

In solar technology parlance, organic cells represent the third generation, after crystalline and thin film solar cells. While organic solar cells are inexpensive to manufacture, the issue that companies and researchers are grappling with today is the low efficiency that these cells today offer. That is, conversion of solar insolation into electricity. It is 8-10% lower than crystalline solar cells.

One of the reasons that hinder large scale manufacturing is the fact that power efficiency, which scales inversely with the active area size, does not make single large area cells amenable to roll-to-roll manufacturing. There are dead zones or unutilized spaces in large surfaces that make commercial manufacturing nonviable.

Now, KS Narayan and his team at Jawaharlal Nehru Center for Advanced Scientific Research in Bangalore show that they have made a dent in both these problems. They propose their new strategy and results in the latest issue of Advanced Materials.

For increasing power efficiency they use low temperature meltable alloys as cathodes which results in reduced resistive electrical loss and additional photo-generated carriers near the metal electrode. Secondly, and more interestingly, they do better light harvesting by using specific flurorescent dyes in the non-active zone of the cells.

Dyes are introduced in the electrode gaps which cause re-direction and re-emission of incident white light. (They absorb the blue light and remit it as red.)

Researchers say this active encapsulation where light wavelength is converted to a more desired wavelength for the device to be redirected effectively is a new concept in the field. Their devices showed 12 percent increase in efficiency upon inclusion of the suitable dyes. They also argue that since there’s a wide selection of dye-molecules and a reasonable large range of melt processible alloys, this fabrication technique can be used for a variety of organic cells.

Brian C O’Regan, who is part of the Solar Network at Imperial College London, works in the related area of dye-sensitized cells (not polymer cells) says he “really likes” Narayan’s work. “I am fairly sure the work is novel, I haven’t heard of this approach before. And it appears to solve a problem that polymer cells face in the issue of upscaling.”

Narayan, who has secured his intellectual property through PCT, is keen to commercialize this technology. He believes there are many small and big uses in India, from canopies in large hotels to small devices running off-grid in rural areas. “Companies which are looking for non-existing applications will find this more appealing,” he says.

India is a melting pot of renewable energy experiments, including  business models. Unlike Europe,Germany in particular,India isn't subsidizing generation, nor is it subsidizing manufacturing like China. With nearly 400 million people without grid power, it’s clear that decentralized non-polluting sources of power will bring relief to millions in this country.

Even with the first two generations of solar technology, industrial commercial users are moving to decentralized power generation because it is more economical, says Tobias Engelmeier, managing director of Bridge to India, an environment consulting company in New Delhi. With new technology, you can expect even more decentralization. “Organic solar cells would accelerate this trend as the cost/kWh comes down further, say from Rs 7 to Rs 5,” he says. “It has almost become a question of commercialization, not one of whether it’s the best technology.”

There has been some fatigue with solar technology breakthroughs because of the initial hype generated, especially in the US, and VCs went along with it. But as we saw, solar made bigger advances through evolution – cost, scale, volume—rather than revolution (in technology).

Incidentally, the pace of R&D and the subsequent breakthroughs have once again brought the shine back on solar technology. TechNavio’s analysts expect the global next-generation organic solar cell market to grow at 66.23 percent over 2012-2016. One of the key factors contributing to this market growth is the increase in attributes. Earlier this year German company Heliatek, one of the leading organic solar cell manufacturers, improved its own previous record by showing  an efficiency of 12%.

“It’s fantastic that an Indian lab has shown this breakthrough as India has traditionally not contributed to solar technology development,” says Engelmeier.

But since it’s now a question of commercialization, will Narayan find equally talented partners to take his lab prototypes to the market?

Rajesh Rai, chief executive of India Innovation Fund which invests in IP-driven start-ups, finds the technology interesting. “Assuming that the technology is differentiated and novel (as it seems to be) the key is how well Prof Narayan may work with a partner - a corporate partner or an individual,” he says.

For Narayan, who is also the dean of R&D at JNCASR, it isn't just about commercializing this particular technology. He has a full portfolio of ready-to-commercialize technologies. More importantly, he also has to set an example. “I will have to take the plunge as this [commercialization] is what we are encouraging among our students.”

8,871
Thank you for your comment, we value your opinion and the time you took to write to us!

Tweets by @forbes_india
Prev
Today in Tech: How top 5 fared in 2012; IIT-B and entrepreneurship; Kim Dotcom gets a CEO
Next
Today in Tech: E-Commerce in Small Towns, Nasscom on Exports and More