Field catalysts play pivotal but largely unseen roles in supporting and orchestrating the efforts of direct-service nonprofits, philanthropists, and other stakeholders.

Soumitra Pandey is a partner in the Mumbai office of The Bridgespan Group. Taz Hussein is a partner in Bridgespan’s Boston office and is a co-author of “How Field Catalysts Galvanize Social Change", which appeared in the Winter 2018 issue of Stanford Social Innovation Review and upon which this post is based. 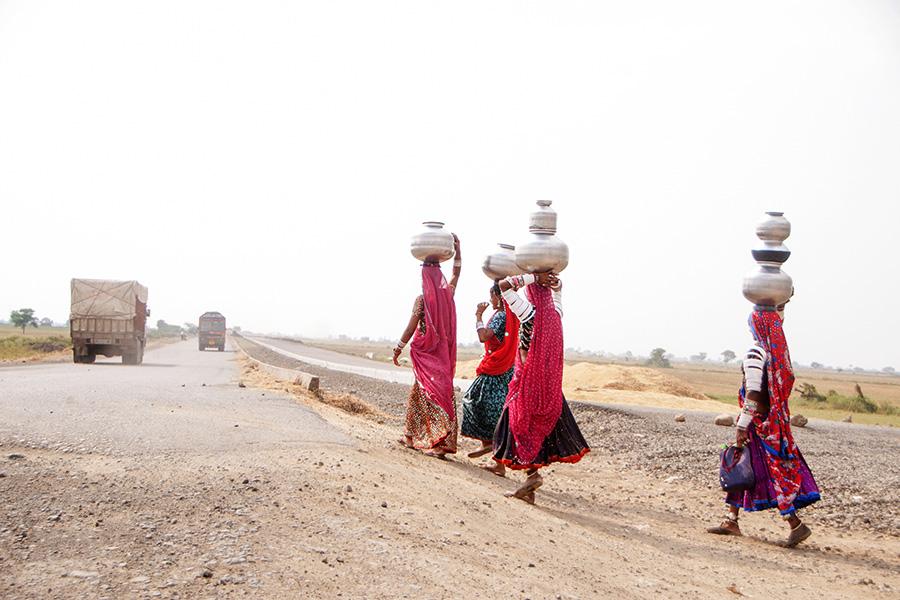 Like compounds that speed chemical reactions, an emerging group of intermediaries are activating faster and wider social change. Called “field catalysts,” these organisations play pivotal but largely unseen roles in supporting and orchestrating the efforts of direct-service nonprofits, philanthropists, and other stakeholders. For example, since its founding in 1998, the Switzerland-based Roll Back Malaria (RBM) Partnership has acted as a hub for eradication efforts across 30 countries. Result: The malaria mortality rate, which takes into account population growth, is estimated to have decreased by 60 percent globally between 2000 and 2015.

This is not to suggest that RBM is primarily responsible for such dramatic results. But the evidence indicates that by building a marketplace for ideas and a framework for action, RBM helped position the field for breakthrough success.

According to recently published research by The Bridgespan Group, titled “How Field Catalysts Galvanise Social Change,” published in Stanford Social Innovation Review, these agents harmonise activities and mobilise resources in order to create a coordinated and focused response to social challenges. Working behind the scenes, field catalysts share four defining characteristics. They: •    Concentrate on achieving population-level change, not simply scaling up an organisation or intervention;
•    Influence the actions of others, rather than acting directly themselves;
•    Work to get things done, not build consensus, and;
•    Are designed and managed to win, not last.

Field catalysts that are based in the US include the Campaign for Tobacco-Free Kids, which came to life in 1995, when smoking rates among adolescents had climbed to nearly 37 percent. Two years later, US rates began a decline and reached 9.2 percent by 2014. 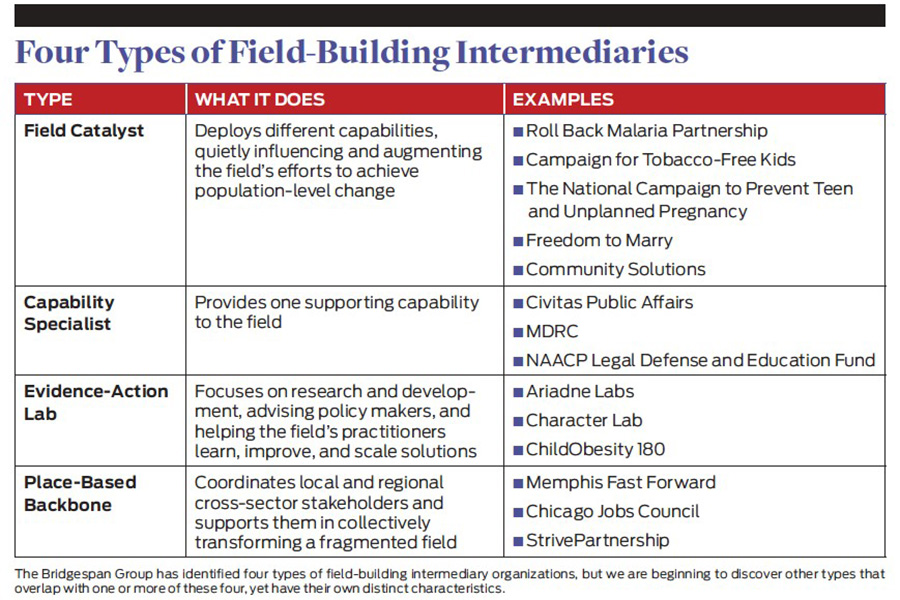 Another is the National Campaign to Prevent Teen and Unplanned Pregnancy. In 1991, teen childbearing in the US had climbed to more than 60 births per 1,000 teenage girls. Founded in 1996, this catalyst mobilised public messaging and became a “trusted source” for objective information. The birth rate for teens aged 15 to 19 declined 9 percent from 2015 to 2016, to 20.3 births per 1,000 women.

Those two intermediaries were not the only agents of change in their respective fields. But catalysts were a common denominator, not only in the fields of tobacco cessation and preventing teen pregnancy, but in six other fields where breakthrough change occurred, such as reducing chronic homelessness in the US and accelerating the global eradication of polio. Catalytic intermediaries neither deserve all the credit for their fields’ successes, nor would they claim it. And yet, again and again in Bridgespan’s study, catalysts served as hubs for spokes for advocacy and action, and helped propel stakeholders toward population-level change.

Consider the Centre for Science and Environment (CSE), a public interest research and advocacy organisation based in New Delhi. Founded in 1980, CSE has been central to social changes in areas as diverse as vehicular air pollution, food safety, and watershed management. Its interventions have resulted in several changes in Indian regulations, as well as landmark judgments by the Supreme Court of India.

As to differences, Aditya Batra, CSE’s program director – board and funding, points out that Indian field catalysts often have a wider portfolio of activities, including some combination of research, activism, coalition-building and efforts to expand the capacities of public institutions.

Describing CSE as “a hybrid between a university and Green Peace” Batra says an Indian field catalyst cannot operate in the shadows, as they do in the US. “To move the Indian system, we need to build public awareness, and that often means playing a more ‘in-their-face’ role.”

First, Batra says, it decides on the issue. “We only get involved where we believe our interventions will add value. If there are already several organisations working in an area and playing an effective role—biodiversity, for example—we stay away, believing that our resources would be more usefully deployed on other issues.”

Third, the organisation raises public awareness. CSE aggressively reaches out to mainstream media, as well as runs its own magazine and documentary film unit. It even holds regular press workshops on such issues as the environment and public policy. On average, Batra asserts, the media quotes CSE’s reports and opinions “at least three times a day.”

Finally, CSE works closely with India’s regulatory bodies, law-makers, judiciary and policy makers. Following CSE’s research and public outcry, for instance, the Supreme Court of India mandated the use of compressed natural gas as fuel for all public transports in mega-cities. Similarly, CSE’s report on pesticide residues in carbonated drinks led to a Joint Parliamentary Committee, only the fourth since India’s Independence, whose report resulted in stricter food safety rules. It also strengthens capacities of public institutions such as regulatory agencies in the frontline of enforcing environmental rules, monitoring and compliance.

Widening government services—and, indeed, making politicians more accountable—has been the specialty of another successful Indian field catalyst called Mazdoor Kisan Shakti Sangathan (MKSS). The group’s name translates as Organisation to Empower Labourers and Peasants, and it has. How that was done, requires some history:

India inherited a bureaucracy built by the British to serve colonial aims. After Independence, the passage of a democratic constitution theoretically meant that the lawmakers were accountable to the people. The bureaucracy, however, continued to follow colonial rules, and remained completely unaccountable and opaque. While the parliament or a state assembly would appropriate funds for social programs, it was impossible for average citizens to find out how much actually reached the recipients, or their results.

Formed in 1990, MKSS initially worked out of a group of small villages in India’s north-western state of Rajasthan. The state is a water-scarce region, where small farmers often depend on drought relief works by the government to sustain themselves.

MKSS found that government officials often falsified records and pocketed funds. It countered by holding public hearings in Central Rajasthan. There, records obtained from sympathetic government officials were read aloud and discussed with the villagers. This led to the filing of criminal cases.

The public hearings also attracted regional and national media attention. When the association of Gram Sevaks (Village Secretaries) threatened to strike rather than provide information to the public, MKSS demanded that the state government enact a law to make access to such information a citizen’s right.

In 1996, it also played a key role in forming a National Campaign for People’s Right to Information (NCPRI), which became a movement at the national level. Constant pressure from the NCPRI, accompanied by unrelenting media attention, resulted in several states passing Right to Information Acts, starting with Tamil Nadu in 1996.

In 2005, the Indian Parliament passed a comprehensive, national Right to Information Act. Despite flaws, it is now the nation’s most important piece of legislation empowering Indian citizens to fight corruption.

“Successful field catalysts do certain things very well,” says Taz Hussein, a leader of The Bridgespan Group’s research on these entities and a co-author for this article. “This includes gaining the trust of many stakeholders, some of whom have competing agendas.”

He adds, “While they neither deserve, nor would claim, all the credit for success, the appearance of a field catalyst repeatedly correlates with the tipping point for change. The implication is clear: To make real progress against this century’s emerging challenges, we will need the field catalysts.”

Soumitra Pandey is a partner in the Mumbai office of The Bridgespan Group. Taz Hussein is a partner in Bridgespan’s Boston office and is a co-author of “How Field Catalysts Galvanize Social Change", which appeared in the Winter 2018 issue of Stanford Social Innovation Review and upon which this post is based.

5,628
Thank you for your comment, we value your opinion and the time you took to write to us!

Tweets by @forbesindia
Prev
Shared business values for greater impact : An innovative approach
Next
Why sustainability is more than a collection of feel good initiatives