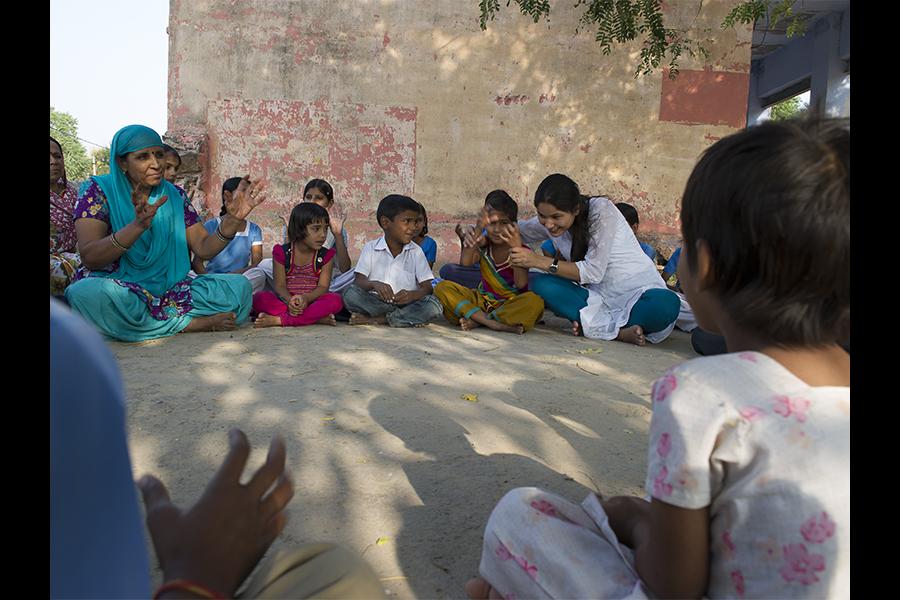 A transformed India where a billion thrive with dignity and equity.

This statement goes well beyond ensuring individuals earn more than India’s poverty line at $1.25 per day. Instead, it sets a higher standard to ensure that a billion people are given the opportunity to succeed in our country. This entails providing dignity to women and children; beginning with access to private, hygienic toilets. It entails investing in waste management systems which ensure that fecal sludge does not end up in our water supply. It focuses on equity in education that goes further than the reading and writing of one’s name (the traditional definition of literacy) and emphasizes learning outcomes which allow students to flourish in today’s economy. It provides mothers the opportunity to deliver healthy babies in hospitals and gives them the knowledge and resources they need to keep themselves and their babies healthy through infancy. It guarantees a fair, just and swift legal system ensuring all citizens, especially the most disadvantaged, are protected. A transformed India where a billion thrive with dignity and equity changes the conversation from only charitable giving, giving a man a fish, to philanthropy, teaching him to fish.

Philanthropy is not new to India. In fact, it was a driving force towards the independence movement with industrialists including Jamnalal Bajaj and GD Birla funding not only the freedom movement, but going further to support the removal of untouchability, popularization of khadi industries and foster Hindu–Muslim unity. Industry leaders provided capital, networks and business acumen to incubate, scale and sustain India’s leading institutions and movements. Fortunately, the same holds true today with a new breed of philanthropists pushing the limit when it comes to their giving. According to Ronnie Screwvala (Co-founder, UTV Group), “It’s not just about cutting a check – it’s a lot more than that. It means giving your skills, your time and energy, your mind space. Money alone is not going to solve our social issues.”

While focus areas may differ from drought relief to ending child marriage, high impact givers realize the need to understand and include the community. Ashok Bhansali (Co-owner, Bhansali & Co.) states, “Talk to the intended beneficiaries, understand their world, understand the nature of their problems – don’t impose a solution on their problem simply because it makes you feel better, or because it makes you look good.” Zarina Screwvala (Co-founder, UTV Group) concurs, “The biggest lesson we’ve learned is to put your community at the center, listen to them, be humble enough to understand that they know what they want.” Similar to business, it is extremely critical to engage your customers which, in this case, are the individuals who are lifting themselves out of poverty.

To impact a billion lives, scale is critical.  This is another skill that philanthropists are bringing to their NGO partners. Aditi Kothari (Executive VP, DSP BlackRock), “Whether it’s a for-profit or a non-profit, the building blocks to put them together, and the basic principles that apply to their running are the same. They involve the same questions concerning human resources, maximizing yield from a certain sum of money, the need for strategic impact and the operational challenges of dealing with the government. In business, your end goal is profit, in an NGO, your end goal is impact. If you give INR 100, you want to make sure you can feed five people instead of two. And you want to keep improving that efficiency until your INR 100 feeds seven people, maybe 10. So, much as we do in business, in the social sector too we constantly look to improve our efficiencies.”

Collaboration is essential. Rati Forbes (Director, Forbes Marshall) states, “Having worked on projects by ourselves, and then having worked on projects that are collaborative in nature, I've realized that when you partner with a group of stakeholders, the impact you can have is much stronger, more long term, and affecting a much wider audience. If you’re looking at real scale, then collaboration is the only way to do it.”

In order to solve most social issues, working with government is also crucial. Mohandas Pai (Chairman, Manipal Global Education Services) states, “I think if you decide to start giving back to society, and you aim to create large-scale, long-term impact, you have to see the government as a key partner. The government is that very unique piece of the puzzle that can make so many of the other pieces fall in place automatically. Imagine if we had the government fully backing every serious, well-planned social initiative from the last 10 years – imagine the country we would have been by now!”

While these are a few examples of how givers are becoming more engaged, the need for a strategic philanthropy movement is imperative. We need to drastically expand the number of givers as well as simultaneously build capacity of NGOs to scale. According to the latest figures, 57 families possess wealth equal to 910,000,000 Indians. A transformation is required where a billion thrive with dignity and equity – we have the ability to actively drive this movement.

6,412
Thank you for your comment, we value your opinion and the time you took to write to us!