Need of the hour: An army of noble hearts battling classroom hunger for India's children

India has a long distance to traverse to eradicate its problem of hunger, especially among children – the torchbearers of its future. Here’ why we need to step up the fight against classroom hunger

Currently serving wholesome mid-day meals to over 1.6 million school children in 11 states across India, the Akshaya Patra Foundation’s cause of ‘unlimited food for education’ helps address the issue of classroom hunger in the country. Since its beginnings in the year 2000, Akshaya Patra has expanded greatly to benefit the children of India and in 2016 it celebrated a significant milestone – the serving of 2 billion meals since its inception. 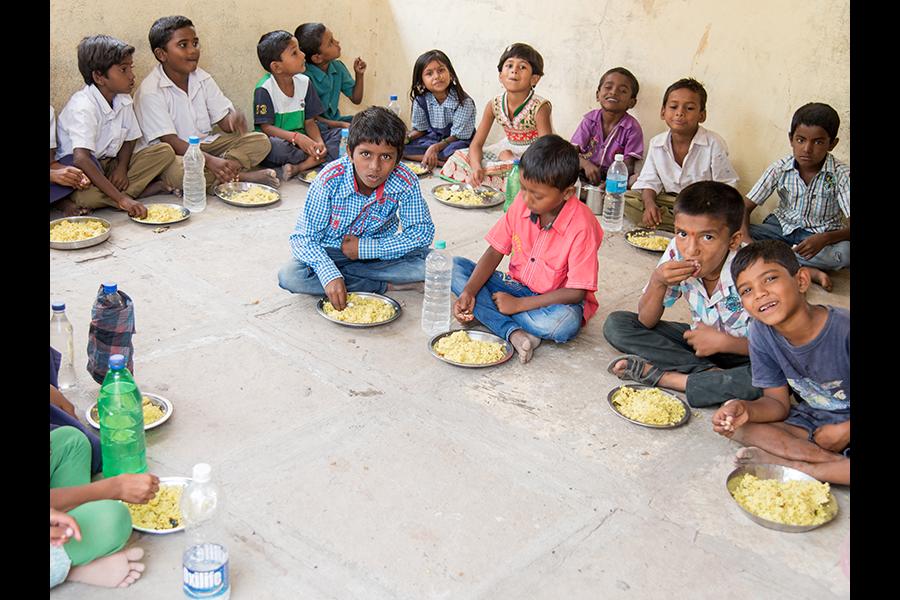 I recently got to know of a young boy called Vikas Mudi, who attends a school in the slums of Nachanahalli Palya in Mysuru. His family was struck with tragedy last year, when he lost his father in a road accident. Unable to cope with the financial strain, his mother was about to pull him out of school. A timely intervention by his teachers, coupled with the promise of a meal in school, kept this very bright young boy, proficient in five languages and great at academics, in school.

I wish Vikas’s case were an exception in India, but sadly, that isn’t the case. In our country, hunger and poverty run riot, and education suffers collateral damage. The latest statistics released as part of the Global Hunger Index (GHI) rated India’s hunger problem as ‘serious’. With a score of 28.5, India ranks at a dismal 97 out of 118 countries in the GHI and 15% of the population of this country is undernourished. Does this bode well for the world’s fastest growing economy, slated to become the youngest country in the world by 2020? It certainly does not. How are we to ensure the physical and mental well-being of such a young population, with hunger clawing in their gut? How are we to expect them to realise their full potential, chase their dreams and take the reins to lead full lives? Don’t they have every right, just like you and I, to inherit a world full of hope, of opportunities that don’t seem perched on a mountain of challenges?

Had the problem of hunger been isolated, perhaps, the situation wouldn’t look as grave. However, reality is the bitter pill we have to swallow if we are to fully remedy our ailments. Like most worries, hunger never arrives by itself. It is linked with other woes. A many-fanged monster, it claws at our bodies, our minds and our prospects for the future. Undernourishment, stunted physical growth, child labour – these are offshoots of hunger and poverty. Food being a basic necessity, often demands that childhood be sacrificed at the altar of the promise of a full stomach. And education is the casualty that is part of this sacrifice.

What troubles me most about the problem of poverty and hunger, is its effect on children. It pains me to think that the childhood of a large number of children in India, is robbed of innocence, of school memories and idyllic afternoons, and hearty meals with family. A study conducted jointly in 2016 by UNESCO Institute for Statistics (UIS) and Global Education Monitoring Report, revealed that 47 million children in India dropped out of school by Std 10. The same study also found that India has the third-highest number of out-of-primary children, who never attended school – a troubling figure of 2.9 million. Those of us who have seen happier childhoods, with a good education, owe much to it – our successes, our evolved worldviews, our financial security, our personal and professional growth, and our capacity to offer the same to our families.

One of the hallmarks of our Indian society is that throughout the ages the pursuit of knowledge has always held the highest prominence in it. The children of our country have inherited this zeal for knowledge and learning and are passionate about keeping it alive. It is unfortunate then, that financial constraints seep into their lives and keep them from furthering their learning and education. These children have every right to dream big and have their dreams realised. The Government of India’s Mid-Day Meal Scheme is a stellar initiative towards this cause. NGOs like ours – The Akshaya Patra Foundation – implement this scheme and help take it further across the country.

A healthy, wholesome, nutritious school lunch a day provides parents the incentive to send their children to school. The Mid Day Meal Programme has resulted in a rise in school attendance and enrollment, better concentration among students and the blurring of socioeconomic boundaries, as children sit together to eat their fill. This dual-pronged strategy to address concerns regarding hunger and education has led to numerous success stories. One such story I love to recount is that of Saraswati, a beneficiary of Akshaya Patra, who went on to complete her school education and pursue her PhD in Pest Management from Bangalore University.

The dream of an equal world is worth all our best efforts. With the banishment of hunger and the blessing of a good education, we will take a giant leap towards it. All that is needed is an army of noble hearts – you, me, our families, friends, relatives and acquaintances – marching for the cause and taking it to fruition. The movement of ‘unlimited food for education’ and all of us associated with it, at Akshaya Patra and beyond, hope to find us by our side, to keep the flame of education burning in young minds, lit by hearty, wholesome meals.

- By Shridhar Venkat, CEO of The Akshaya Patra Foundation, a not-for-profit organisation in India that operates the world’s largest NGO-run mid-day meal programme

7,656
Thank you for your comment, we value your opinion and the time you took to write to us!

Tweets by @forbes_india
Prev
Why CSR and other grant-makers need to provide more 'good' overheads to NGOs
Next
Shared business values for greater impact : An innovative approach