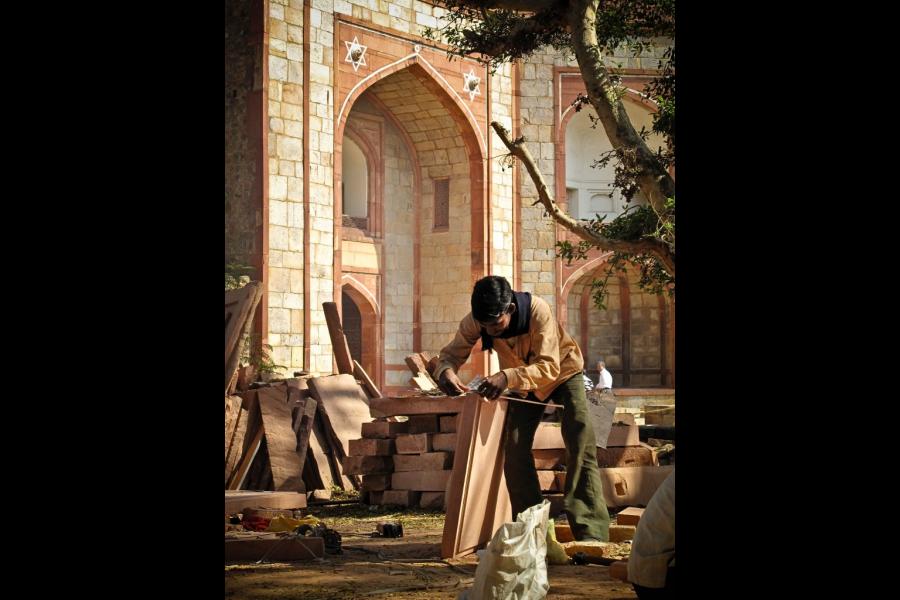 Restoration in progress at Humayun's Tomb, New Delhi. In a country like India, heritage is just another word taken for granted and heritage preservation is not a very high priority either. However, it has been proved that promoting local art and culture through heritage conservation is directly linked to the social well-being of the community. The definitive reason for this can be that it spawns a sense of identity among people who associate with the culture and share a common history with it

In general, corporate social responsibility (CSR) programmes of corporates in India rarely involve initiatives about protecting culture and heritage. Projects on education, water, poverty alleviation and almost every other potential focus areas listed out under schedule VII of the Companies Act, 2013, find precedence over heritage conservation, indicated under entry (v) of schedule VII. The importance of engaging communities through initiatives on art and culture is not being put forth systematically and corporates are not aware about the benefits of carrying out such programmes. This field thereby poses immense potential for executing successful CSR programmes which can align a corporate’s activity to its core business.

Among the industries that are dependent on heritage and culture, the tourism and hospitality sectors can derive maximum value from strategic initiatives. Programmes can focus on establishing the importance of sites, creating awareness, grading sites on parameters, carrying out physical restoration, setting up management frameworks and maintenance. Intangible cultural resources can be catered through capacity building and training. Similarly, other sectors can also have successful CSR projects if the geography of operations holds cultural significance of some kind.

Success stories In India, a few companies have already been carrying out programmes in the field of heritage and culture preservation. Public sector companies like ONGC, Indian Oil, NTPC and GAIL have been undertaking renovation and maintenance activities for temples and monuments around their operational areas. The Tata Group has been traditionally involved in promoting local structures of importance and setting up museums. Its primary mode of engagement is through institutions and trusts that receive complete funding via the group’s profits. It has also assisted the Archaeological Survey of India (ASI) through grants in the past.

Coca-Cola India was involved in the restoration of two 400-year-old stepwells in Rajasthan – The Sarai Bawari and Kale Hanuman Ki Bawari. The company set up initiatives in the local community for labour implementation and creating awareness. Local residents now enjoy the benefits of the stepwells with increased water storage and supply, while the company revels with the goodwill generated among its customers. This example shows a perfect corporate-community engagement model benefiting both the parties involved in distinct ways.

Government schemes and initiatives
Initiatives such as the National Culture Fund (NCF), set up under the ministry of tourism and culture in 1996, were started by the government to help this cause. Through such efforts, the government has established a platform for channelising private investments in the field of culture preservation. A total of 100 monuments of national significance have been identified and have been put up for adoption. Though the participation and effectiveness of deploying funds through the initiative has been satisfactory, the projects prominently feature public sector companies like NTPC, GAIL and ONGC.

In 2012, the ministry carried out a ‘Clean India Campaign’, in response to the feedback on poor hygienic conditions of the sites. As part of the campaign, the Indian Tourism Development Corporation (ITDC) adopted the Qutub Minar. ONGC also expressed interest in adopting sites like the Taj Mahal, Khajuraho Temple, and Ajanta-Ellora Caves. The primary objective of this campaign is to implement a collaborative model where large corporations can adopt a site while local NGOs, traders’ associations, residents, schools, banks, authorities and other organisations take responsibility in maintaining the areas. On similar lines, the Maharashtra and Rajasthan governments also set up platforms for corporates to adopt monuments of past cultural significance.

Way ahead
The scenario for CSR interventions in culture and heritage preservation can be encouraged further with structured planning and execution. At its core, the issue clearly is about establishing the importance of tangible and intangible heritage and its conservation in the mainstream CSR domain. Success stories such as the ones mentioned above have pointed out that value can be generated from engaging communities and governments, and hence, more of such initiatives can be taken forward by corporations as part of their CSR. The link to the missing piece in this case is awareness and the new CSR law might just help change that.

11,983
Thank you for your comment, we value your opinion and the time you took to write to us!