The Smartphone Has Arrived

Marco D'Souza is the founder and CEO of SpotMyGadget.com—a new-generation web-based service that helps end-users intuitively select and buy technology products based on specific real-world needs. An engineer by education, he was always drawn toward the intersection of technology and content, and was the erstwhile Editor of CHIP—India's leading technology magazine. He also served as Director of Content with a technology and marketing company headquartered in Seattle. Photography is a significant passion, and he has authored numerous articles on digital photography and image processing. Being an inveterate foodie, he is regularly on the hunt for the next must-visit restaurant.

They are increasingly powerful, ever-more capable, and now at price points that seem almost too good to be true. These past several months have witnessed the arrival of smartphones from brands that were never really first choice when it came to the premium experience. But the ever-plummeting price of hardware teamed up with new-generation manufacturing processes that can forge surprisingly premium devices at affordable price points have delivered a slew of phones that are merrily eating into the market share of the big players. A change of tides that has transformed many of these smaller players into being big players themselves.

At the opposite end of the spectrum, the premium segment is dominated by products that now sing a different tune. No longer can pure specifications count as trump cards--even entry-level phones today are based on hugely capable hardware. It is the softer factors like user experience, smartly-bundled apps and 'feel in the hand' that are taking increasing precedence in the buying decision. And of course, companies like Apple continue to cash in on brand loyalty and masterfully-managed hype for luring premium-segment consumers. But interesting to note is the subtle shift in strategy in the two smartphone camps (Google and Apple), which is only translating to better devices for all manner of consumers.

Google Finally Takes Steps To Eliminate the Chaff There was a time not too long ago when Google was plagued by rampant fragmentation across all of the phones running Android. The open nature of the Android platform has led manufacturers to differentiate their offerings using a huge blend of screen sizes, processor speeds, onboard memory and software tweaks that together align with the manufacturer's particular branding and positioning. The upshot? Virtually endless choice for consumers. The downside? Many phones with sub-par specifications that all but kill the user experience. With their recently-launched Android One blitzkrieg, Google has released a salvo of strategic offerings to remedy this situation: 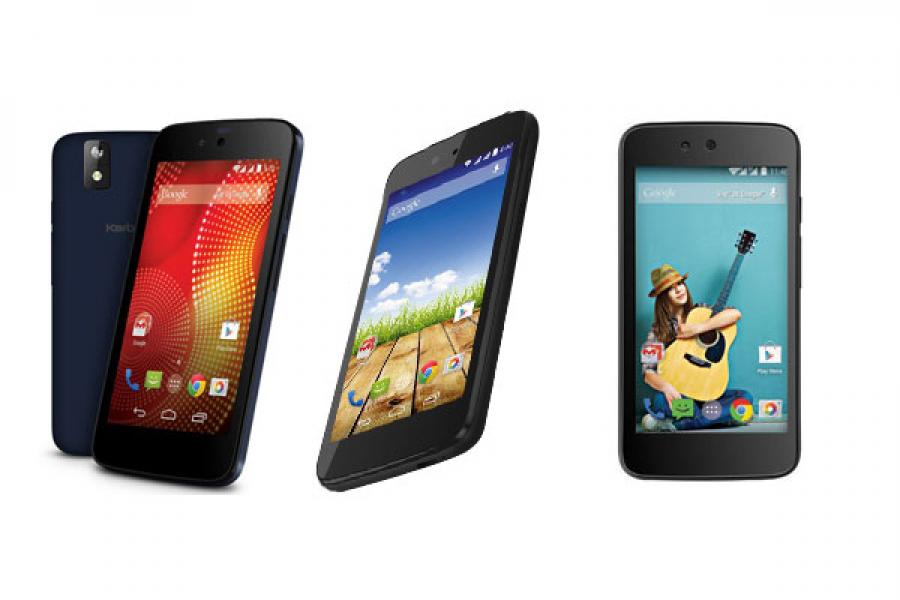 Of course, the fact that the Android One strategy is characterized by an India-first approach (launched in our geography, with local language support built right in) should make it so much more enticing to consumers. But then, there are companies (the Xiaomis of the world, for example) that are already offering phones that trump the Android One on specifications, at even lower prices. Conversely, other companies that are aiming to hit the Rs 5,000 price level, but with a tradeoff in specifications. On balance though, the Android One initiative should infuse much higher-quality smartphones into the market, at prices that will open doors to many new consumers.

Apple Learns That Everybody Wants a Big Screen
Meanwhile at the Apple camp, the two new iPhones are an interesting indication of the path that Apple has chosen. Famously known for being fanatical about knowing precisely what their consumers want, the choice to go with larger screen sizes is intriguing-the large screen trend started years ago, during which time Apple stoically chose to go with more ergonomically sized phones. But contrary to reviews of the ungainly form factor and stilted ergonomics, buyers flocked toward the phone-tablet (it's a detestable word: phablet). Quite simply, larger screens work for consumers. With their 4.7- and 5.5-inch screen sizes, the new iPhone 6 and iPhone 6 Plus are clearly putting more iOS love into the palms of Apple fans. But then, in the rarified premium smartphone segment, it takes a lot more than expansive screens and faster processors to swing users. The new Apple phones are based on a 64-bit architecture with a dedicated motion co-processor that will open doors to a proliferation of fitness and real-world applications. The imaging capability of the iPhone has always been big on Apple's agenda-something that has arguably exemplified the state of the art. With the ability to now shoot 1080p videos at 60fps, slow mo video at 240 fps, and time lapse, they are clearly reaffirming this stance. It would have been interesting to pit an entry-level price range comparison between Apple and Android, but we all know that doing so would open a Pandora's box: Apple is, after all, not known for appealing to the entry level. For the sake of argument, for a new consumer getting into the Apple or Android world today, they would logically opt for the 16GB iPhone 5s or the Android One respectively--both at the $100 price point (on paper at least). But never mind the 16GB variant, even the 8GB iPhone 5c (which happens to be offered free with cellular contracts in the US at present), still retails for around Rs 25,000 on our e-commerce sites. Sure, there's plenty to be argued by way of the Apple experience being incomparable to that of Android's, but at the end of the day it comes down to the device that lets you effectively do what you want to do, at the price you're willing to spend. Never mind the intangibles of how it makes you feel and all that.

It's interesting to see how the strategies of the two companies that determine our smartphone future complement each other. On the one hand, we have Android One aiming to put a capable smartphone in virtually everyone's hand. On the other, we have Apple hoping to lay claim to the top spot while pushing consumers toward fledgling areas of technologies like wearable computing. No matter what though, we are finally starting to see a better smartphone.

26,049
Thank you for your comment, we value your opinion and the time you took to write to us!