The proverbial Big Brother will watch you like never before in 2013. CCTV monitoring is likely to be the next big policing technique in 2013; not all of it will be good 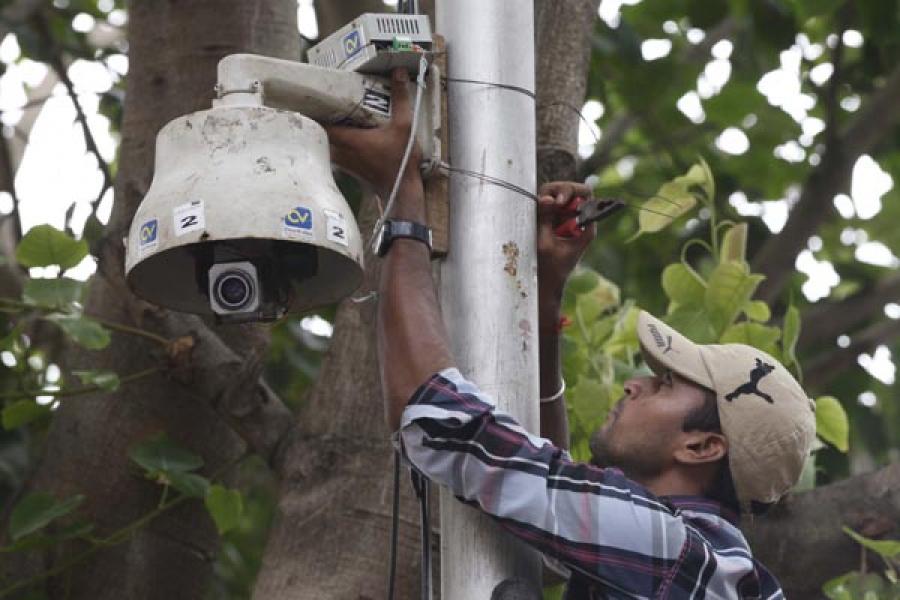 Two weeks ago, a speeding car with four teenagers crashed into a truck-trailor crossing at a four-way junction in Belapur, Navi Mumbai, around 30 km north of Mumbai. The car was going so fast that its roof sheared off as it went under the trailor. Three youngsters including the driver died, perhaps instantly. One survived because he was lying down in the backseat.

Whose fault was it ? The driver, quite evidently, whose eyes were either shut or was gazing skywards as the car slammed into the truck-trailor sideways. How do we know that? Well, you can see it yourself, on YouTube, thanks to closed-circuit television (CCTV) footage telecast by a news channel; and from two different angles. Open and shut. No way can  you blame the driver of the truck-trailor.

For the last two weeks, India has been gripped by the gruesome gang-rape of a 23-year-old para medical student. The girl – who died 12 days later – was molested and assaulted in a moving bus in Delhi and then dumped, along with her male friend who was also beaten up. How did the police find the bus so quickly? The quick clue apparently came from CCTV footage of a hotel in south Delhi which showed the bus passing by.

There have been many more cases, including a shooting at a toll plaza in Gurgaon on the Delhi border where the culprits were apprehended in good time, thanks to images of the licence plates and perpetrators.

A newspaper editor recently said how he was offered CCTV footage by the Central Industrial Security Force (CISF) showing senior journalists resisting security checks at some airports. The CISF manages security in India's airports. I have not seen any report on this though.

Our deeds, and indeed misdeeds, are not so private anymore. The United Kingdom is already touted as the most spied upon country in the world. One estimate says there are more than 1.85 million CCTV cameras, or one camera per 32 residents. Another (disputed) study put the total number of CCTV cameras at 4.2 million. The London tube network itself is covered by some 11,000 cameras. There is an amazing statistic arising from this. The average person in a city centre is likely to be spotted 300 times in a day.

Estimates on this number – how many times spotted – vary but are high nonetheless. That can be worrying or comforting depending on your view or more appropriately, your intentions. Indications are that India will get somewhere there, soon, particularly for crowded public spaces. But Britain is an equally good example of where the CCTV world can or maybe should not go.

A study released three months ago claimed that more than 200 schools across Britain had installed CCTVs in students' toilets and changing rooms. And a total of 825 cameras were found from a survey of 2,000 schools. In all, one estimate says, there are 106,710 CCTV cameras in secondary schools and academies across England, Wales and Scotland. The study has obviously generated some public angst. But note that this is a country that vehemently opposed bio-metric identities on the grounds of invasion of privacy.

There are several questions that arise in the Indian context. One, are CCTV cameras a bigger invasion of privacy than let’s say the data you share with an organisation when you consume a product or service? Or the Government itself? What can someone do with your CCTV images? Second, are they the solution to larger challenges of security that we face in an increasingly insecure world? And finally, will this cause the police force to become more alienated from the people it serves?

The jury for the first question is too far out right now. While there are public debates on the issue of invasion of privacy, the benefits have far outweighed the negatives. Britain itself has had success in nabbing criminals, notably the July 2005 suicide bombers (7/7 bombings). So has India, going by the earlier mentioned examples. This in some ways answers the second question too. In dense, urban environments, CCTV can act as a better deterrent then a policeman or guard who may or may not be there.

The concern of course is whether monitoring of this nature will prevent crime or a misdemeanour from happening. Anecdotal evidence seems to suggest yes and no.

It's fair to say that video monitoring cannot be a substitute for physical policing nor will it prevent crimes beyond a point. Importantly, the perception that you are being watched in order to deter you from doing something needs to spread too.

Next, what can someone do with your images ? Not sure, but blackmail is an obvious thought, given what you were seen doing. And it's the very thought of your daily life actions being frozen for near posterity on some hard disc can be discomforting.

The last question: Will the police force become more alienated now that it knows every square foot is being watched, either by them or by some private agency whose footage it can access? The cynical response is that India’s police, designed more to protect politicians, 'rulers' and sundry VIPs was hardly close to the people anyway. So what difference does it make? Be that as it may, this would be a concern to be addressed at a later date.

For now, several Indian states and agencies are stepping up the coverage. Jharkhand announced last week that it would install CCTV cameras all over the state to keep an eye on “incidents of sexual harassment in public places”. The Bangalore police asked all bus operators to install CCTV cameras. This also followed a case of misbehaviour with two women passengers. Panjim city in Goa is planning 28 points of coverage for traffic and security. It's quite clear that most big cities and towns will see a sharp ramp-up in CCTV coverage.

There is always the issue of whether CCTV footage will stand up in the court of law. Or whether it is being used ethically. In several sting operations, one or the other party has claimed doctoring of footage. But as empirical evidence shows, the footage helps in clinching the final evidence even if its not the evidence itself; like in the Delhi rape case. The ethical question – like filming amorous couples in a park – on the face of it is an invasion of privacy. Though the authorities might claim otherwise.

Fact is that CCTV systems are a low-cost technology today with a fairly high degree of reliability. Nor can they be easily tampered with, unless it’s a well-choreographed attack. It is logical that most public places in India could benefit from monitoring. Particularly buses and the like. Most private establishments, including residential apartments, are already well-covered. Sweeping 'coverage' also tends to catch incidents other than they are designed to; like the hotel CCTV coverage which captured images of the bus in the Delhi gang rape case.

2013 is likely to be an eventful year when it comes to the structure and application of laws for better governance and citizen response. It is also going to be the year where you will be watched by someone, most of the time, everywhere.

18,556
Thank you for your comment, we value your opinion and the time you took to write to us!

Tweets by @forbesindia
Prev
Ratan Tata: The Dreamer Of Cars