Here's how to create happy workplaces

The best happiness initiatives usually involve those that are driven from the top and are embedded in the DNA, culture and values of the company

YourDOST founders had different triggers for starting the mental health and emotional wellness platform. At IIT Guhawati, Richa Singh witnessed firsthand, due to stigma, batch mates not seeking help for stress and depression. When a girl committed suicide two rooms from her dorm, because she didn’t secure a job during campus placement, Richa decided to study mental health and the stigma around it closely. After graduation, at DE Shaw, she met Puneet Manuja, who himself had undergone a difficult period when he was unable to land a job during campus placement, this was despite being a gold medalist at NIT Calicut.The duo founded YourDOST in 2014, an online counselling platform which provides access to self-help tools (personality tests, motivational stories and psycho-educational content) and experts (psychologists, career coaches and other counsellors). With over 800+ experts on the platform, users could reach out to them 24x7, for guidance related to relationships, career, academics, sexual wellness, self-improvement and more. 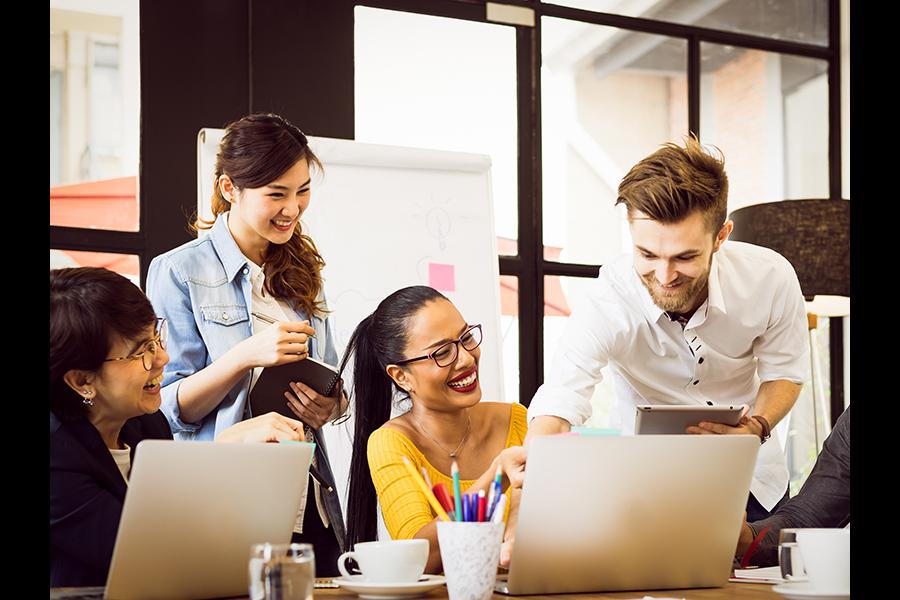 Happy workplaces lead to emotionally stable employees, who in turn become engaged employees, and they in turn are usually, the most productive employees. Unencumbered by negative emotions, they are free to express, and more importantly, to innovate. Happiness is a chimera in most workplaces because of the constant pressure to perform, keep up with peers, impress bosses and secure the next raise. Finding ways to make and keep employees happy should be an imperative for top management.

There are a number of ways to do this.

The best happiness initiatives usually involve those that are driven from the top and are embedded in the DNA, culture and values of the company. Some of the ways to do this is employee engagement, focus on cooperation and collaboration rather than hyper competition, providing autonomy and flexibility, feedback and motivation from managers, transparency, and managers who are non-toxic.

Experiments that studied employee engagement and productivity have been conducted for close to a century now. Between 1924 and early 1932, there were a series of experiments conducted at Western Electric's (also referred to as Hawthorne Works) factory at Hawthorne, Chicago. The findings from these experiments conducted by Elton Mayo, a philosophy lecturer at the University of Queensland, came to be known as the Hawthorne Effect, and shaped conversations around employee motivation and productivity for decades after.

When simple tweaks on lighting conditions, duration of breaks, shorter workdays, choosing of coworkers to work with, working in a separate room and changes to workstations were applied, it lead to an increase in productivity. Later, it was ascertained that changes in productivity was also due to the fact that there was observer bias, because workers worked harder because they were being watched. The Hawthorne Effect is also referred to as the Observer Effect.

Working in any company means giving up freedom and reduced independence. Employees have to take orders from their managers, they have work with teammates with whom they might have disagreements, there might be a mismatch between their personal values and beliefs and that of the company, they might have to work on weekends and spend less time with loved ones. This can lead to frustration and discontentment.

Companies like Netflix hire top performers, give them autonomy with regard to unlimited vacation days, non-monitoring on expense accounts, flexible working hours, and no fixed working hours. No wonder that Netflix is one of the most nimble, high performing, creative companies that is threatening the status quo. Giving employees autonomy or the freedom to make their own decisions in an independent manner can lead to happiness, in a way that even higher raises can’t provide.

Modern day work environments are ultra competitive. This is law of the jungle that is capitalism, where the fate of a company, hangs in balance, quarter after after quarter. This leads colleagues throwing under the bus just to stay ahead leading to an environment of fear and hostility. To stem this, leaders need to make collaboration and teamwork part of the company’s culture, and rewarding team effort versus individual achievements.

A report by Globoforce titled ‘The effect of work relationships on organizational culture and commitment’ stressed on this fact. It found that relationships at work were critical as  most people spend more time with colleagues than with their own families. Some findings were: having friends at work increases commitment to the company, 87 percent of workers report that they trust their co-workers, employees laugh (78 percent) and cry (61 percent) with their peers and 89 percent reported that work relationships and their quality of life were inter-connected. Those with many friends are much more deeply connected to their companies, and indeed are almost three times more likely to say they love working there.

Companies could also take a page out from the happiest countries in the world. Norway, Denmark, Iceland and Switzerland: the four most happiest countries in the world according to the 2017 report rate highly on caring, freedom, generosity, honesty, health, income, good governance, having someone to count on when in trouble, generosity, and freedom from corruption. Translating these parameters into a company’s culture, values and mission will be key to happier workplaces.

Here are some things not to do while striving you create a happier workplace: 1) Excessive meetings
2) Layered hierarchies
3) Jerks who also perform culture
4) Elaborate processes and protocols
5) Political and toxic atmosphere
6) Lack of transparency
7) Bad bosses
8) No respect for women and minorities
9) Unethical business practices
10) Lack of work life balance

8,794
Thank you for your comment, we value your opinion and the time you took to write to us!

Tweets by @forbesindia
Prev
Starting up in India? Get your people strategy right
Next
Why companies must address employee concerns during M&As