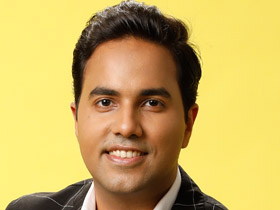 Aditya Sharma, unlike most others on Forbes India's 30 Under 30 List, has earned his stripes by working as a professional. Less than seven years into his stint at global consultancy firm McKinsey & Company, he has already risen to become a partner—the only 20-something to do so in India.

He leads multiple teams and helps several clients make big bets and build businesses, leveraging his command over data and analytics. Over the past 18 months, he has helmed a range of projects, including creating the digital and analytics strategy of a private sector bank and transforming the existing digital business capabilities of a state-run bank. "All of these projects ensured clients are better placed to make big bets," he says.

The seeds to success, for Sharma—an IIT-Kharagpur chemical engineer, who also completed an MBA-equivalent from IIM-Ahmedabad—were sown early. He spent his childhood in six cities in India, thanks to his banker father's transferable job. "Being constantly on the move made me ready to face change," he says.

Sharma began by working across financial services, real estate, infrastructure and education until over time, he saw greater scope to specialise in banking and data and analytics.

"He [Sharma] has shown enormously high levels of maturity and is keen to take on responsibility," says Renny Thomas, who heads McKinsey's financial services practice in India.

At a time of exponential growth of new data, Sharma says he hopes to continue to build McKinsey's regional capabilities in this space. That is true data talk.