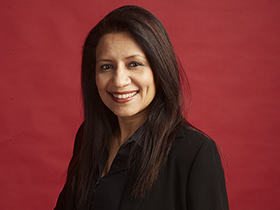 Anupriya Acharya is a 20-plus-year veteran in the media and advertising world. But she was hardly a dreamy-eyed youngster who aspired to carve her niche in the competitive industry when she grew up in Dehradun. The mandate for her and her two sisters was "to work" and be ready with a Plan B if that did not materialise.

In the then sleepy town of Dehradun, she had only two good options—either work with ONGC (which had a drilling technology institute and an academy there) or join the Indian Air Force. Neither worked out and so, on a friend's suggestion, Acharya applied for and bagged her first job, as an assistant media planner with ad agency Ogilvy & Mather in Chennai, in 1994.Over the next 10 years, her journey brought her to Mumbai where she worked with McCann (then McCann Erickson), media agency Mindshare Fulcrum and The Media Edge. In 2009, she joined Aegis Media as CEO in Singapore, which provided her first "cross-cultural experience" of leading regional and global teams.

These leadership skills became huge assets when she took over as Group CEO of ZenithOptimedia (part of the Publicis Groupe) in 2013 and upon her elevation to lead the India business of Publicis Media in 2016.

Publicis Media is a 900-plus strong team servicing clients such as Dabur, Oppo, Fiat Chrysler and Citibank. It has doubled in revenues since 2014 (the company did not disclose data, citing policy) and billings for the agency in India crossed $1 billion (₹6,652 crore) in 2017, led by new clients such as Vistara, Kraft Heinz, Godrej & Boyce, HDFC Bank, McDonald's and Expedia.

"The past year has been among our best [in India], with growth led by new businesses," says Acharya, who has done her master's in chemistry from IIT Roorkee. India features in the top five markets for Publicis Groupe.

Acharya will focus on acquisitions, leveraging on streams such as data analytics, machine learning and ecommerce to expand revenues in 2018.Her expertise in her long career has earned her respect. "Publicis Media brings in global expertise and tools which can be applied on real business issues. Its culture is based on partnering to solve client problems rather than being a consultant," says Rashi Goel, head of consumer communications and ecommerce at Nestle India, a client of Publicis Media.

Acharya's professional journey, however, is far from complete. She is keen to build another career, after studying law, if time permits. "Coming from a small town, I believe that one must first win the battle of the mind... you must set your goal really high, else one cannot achieve anything," she says.