All that glitters is aluminium 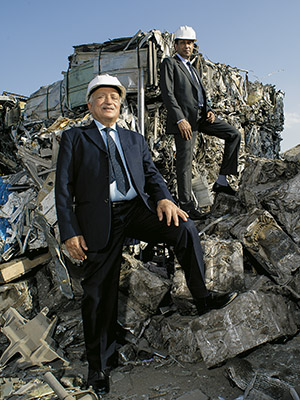 Since its inception in 2006, CMR has cemented its place as India’s largest maker of aluminium-based die cast alloy, used by manufacturers of automobiles and equipment to make parts. CMR, which recycles aluminium scrap to make alloy, has 20 percent market share and is three times larger than its nearest rival. The Rs 1,040-crore company has many other firsts to its credit, including transporting molten metal to customers’ plants, instead of the traditional metal ingots.

The men behind it
“My greatest fear was to work for someone else,” says Managing Director Mohan Agarwal, who quit chartered accountancy to join a business. It had been almost 20 years since Mohan and his father GS Agarwala had joined the latter’s friend MP Jhunjhunwala to set up Century NF Casting in 1986. “My friend wanted to expand his business outside Kolkata. So he roped us in,” says Agarwala. By the turn of the century, the company was “bursting at its seams” and Mohan travelled overseas to get new technology, and expand further. But their partner was not keen. So the father-son duo set up CMR in 2006.

Why IT IS a gem
CMR is the first in the industry to scale up. It set up four facilities, taking its capacity to over one lakh tonnes a year. Scale was important because the industry is known for high volumes, but low margins. Though CMR’s EBITDA margin is 6 percent, its profitability is better than the industry’s. To lower costs and get better prices, Mohan started transporting molten metal to clients, who didn’t need to melt ingots anymore to cast them.

In a vindication of his model, Mohan has got two of Japan’s biggest names as venture partners. He is setting up facilities in Chennai, and Haryana in separate partnerships with Nikkei MC Aluminium (Japan’s second largest aluminium alloy maker) and Toyota Tsusho. “We have 40 percent market share in north India and will enter the southern market with the Toyota Tsusho JV. We want to go to west India next,” says Chairman Agarwala.

Why it was hidden
“It is a little known industry and there is no branding. But if you take a look at CMR’s clientele, they are the biggest brands in the auto business,” says SP Arora, managing director, IFCI Venture Capital Funds, which bought 8 percent in CMR this year. The industry is also largely unorganised.

Risks and Challenges
Though the Agarwals expect the industry to grow four times in the next five to seven years, CMR would be pressed to maintain its annual growth rate of 50 percent.  Mohan has set sights on diversification after consolidation.