Sahil Naik: Sculptor with an eye for detail 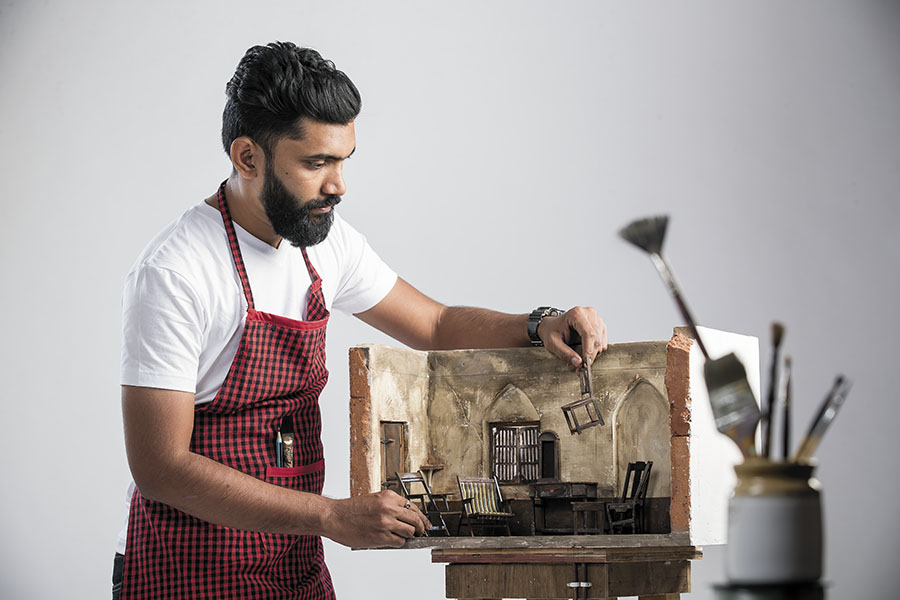 Sahil Naik | 26
Sculptor
Growing up in Ponda, Goa, Sahil Naik would join the annual Diwali festivities by helping build Narakasura effigies with wood, newspapers, hay and home-made glue, which would then be set alight amid fireworks and revelry. Today, the skills he uses are perhaps those he learnt first as a child, but the sculptures he creates are shaped by his experiences as an adult. Naik’s debut solo exhibition, Ground Zero, now running at Experimenter Gallery, Kolkata, depicts, through miniatures, a world stripped of human life and its small joys, and abandoned to a derelict fate. Naik’s work explores the politics and poetics of terror, and how architecture stands as anything but a mute witness to the horrors in human lives.

For Ground Zero, Naik chose two locations—the cafeteria at MS University in Baroda, where he studied for his master’s degree, and the area of Khirkee in Delhi, where he attended a residency by Khoj International Artists’ Association—and imagined them in different circumstances: The cafeteria as an explosion site, and the Khirkee neighbourhood as a post-apocalyptic vestige. “For me, the abandoned structures are open to a speculative narrative,” he says, leaving the viewer to imagine what calamity might have befallen these spaces.

Talking about Naik’s work, Radha Mahendru, curator and programs manager at Khoj, says, “I am very interested in Sahil’s practice—the complexity of his ideas translates into his sculptures in a nuanced yet effective manner. He is hardworking, honest, and has a fine eye for detail.”

Naik has won several awards and his upcoming exhibitions include a group show at the Delfina Foundation, London (January, 2018), the India Art Fair with Experimenter, Kolkata (February 2018) and at Turn of the Tide, curated by Khoj International Artists’ Association (February 2018).