How to have the last laugh, the Abish Mathew way 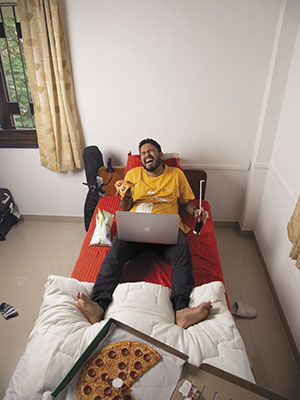 Image: Joshua Navalkar
On an off day, Abish Mathew is most likely to sit at home and binge on food and funny videos

In 2012, Abish Mathew left his three-year-old job as a radio jockey with Delhi’s Hit 95 FM and came to Mumbai. He wanted to explore avenues in stand-up comedy beyond the occasional corporate gig. “Since then, my career has been expanding in all directions. Just like my waistline,” laughs Mathew.

In just three years, Mathew is among the most sought-after comics in the industry. The past year has been particularly rewarding with the success of his live chat show, ‘Son of Abish’, with leading comedians as his guests.

“Abish is one of those rare comedians who has all the other comedians in splits when he performs. Someone else can try that same joke and it just won’t be funny. He just ‘Abishes’ it,” says popular stand-up comic and YouTuber Kanan Gill.

The reason why you see Mathew in several collaborative videos, says Gill, is that “he is one of the most talented actors around and everyone wants to work with him”.

The core of his comedy is the energy he puts into each joke. His strategy is to be well-prepared but also improvise, because, “when the spotlights are on you, the instincts kick in. And instincts are funnier than your cerebral predestined jokes,” Mathew explains.

Though Mathew always loved making people laugh, it was only when he discovered the likes of Russell Peters and Robin Williams that he realised it could be a profession.

Recalling his first online series, Pun Liners, Mathew says, “I wasn’t great, but if you do something for long enough, you become good at it and if you are good at something, don’t do it for free.” Currently, he is working on a bunch of songs and comedy videos, which will be out by end-March, following which he will start work on ‘Son of Abish’ season two.

Mathew is all set to have the last laugh.

Tweets by @forbesindia
This hotelier is donning the revivalist's hat again
30 Under 30: Karishma Shahani Khan - Desi by design