AlphaZero: A watershed moment in AI?

The program mastered board games like chess on its own. But is it the dawn of silicon intellect? 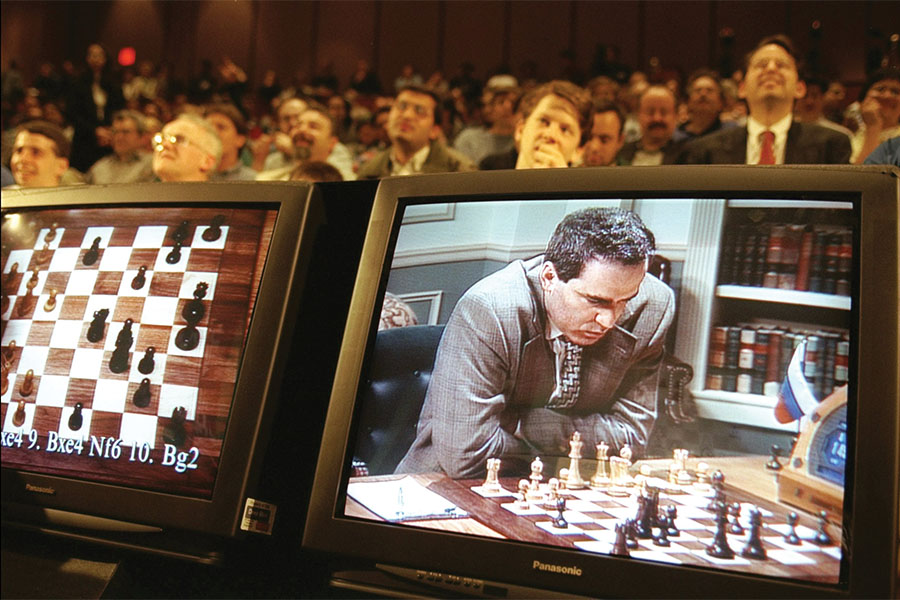 Garry Kasparov ponders his next move during his match against Deep Blue at the IBM Chess Challenge in 1997
Image: Bernie Nunez/Allsport/ Getty Images
For those who fret over the possibility of intelligent automation rendering their jobs obsolete, chess Grandmaster Garry Kasparov is the perfect antecedent.

Kasparov was the first reigning World Chess Champion to concede defeat to a machine when, 21 years ago, the $10-million IBM supercomputer Deep Blue outsmarted him in a six-game tournament in New York. At the time, it was seen as a major milestone in the march towards artificial intelligence (AI).

Yet, in the wisdom that hindsight offers, many—chess players and AI researchers alike—have argued that Deep Blue’s victory was the triumph of brute computing power and clever programming rather than the ingenuity and instincts that characterise human intelligence. “Instead of a computer that thought and played chess like a human, with human creativity and intuition… [Deep Blue] played like a machine, systematically evaluating 200 million possible moves on the chess board per second and winning with brute number-crunching force,” Kasparov wrote in his 2017 book Deep Thinking.

His 1997 defeat seems even less epochal now, given the feats of AlphaZero. Last December, the AI program—developed by London-based DeepMind, a company purchased by Google in 2014 and now a distinct entity under parent Alphabet Inc—acquired unprecedented proficiency in chess with minimal human intervention.

To start with, its programmers taught AlphaZero only the bare essential rules of the game—that bishops move diagonally, and knights jump over occupied squares, for instance. With just this basic, AlphaZero started playing against itself. Unconstrained by human strategies and notions, the AI program devised its own game plan.

Four million games and four hours later—improving its play with a self-training process called ‘reinforcement learning’—AlphaZero was pitted against Stockfish 8, the 2016 winner of the Top Chess Engine Championship, the world championship of computer chess. In the ensuing 100 games, DeepMind’s program won 28-0 (72 games were drawn), creating a buzz, and some alarmist fears, reminiscent of the Deep Blue match.

The DeepMind team declined to comment on questions from Forbes India, saying their work “is currently undergoing peer review”. AlphaZero is the latest in a series of game-playing code developed at the company founded by avid chess player Demis Hassabis in 2010. Its predecessor AlphaGo had beaten the world’s top Go player in March 2016.

“It [AlphaZero] is a remarkable achievement, even if we should have expected it after AlphaGo,” said Kasparov to popular chess website chess.com last December. “It [AlphaZero] approaches the human-like approach to machine chess… instead of brute force.”

Kasparov’s former rival and World Champion Viswanathan Anand concurs: “AlphaZero is the first [real] AI program; previous versions relied on brute force. From the very few games we have seen [only 10 of the 100 games against Stockfish have been published], it’s tantalising… and could revitalise all sorts of directions in chess; it could show us things that we did not know until now.”

Technologists too agree with the grandmasters. Dilip D’Souza, a former computer scientist who started his career as an AI researcher with Texas Instruments in 1983-85, says: “AlphaZero is certainly far closer to the idea of intelligence than Deep Blue ever was—what makes humans intelligent is our ability to learn. AlphaZero’s skill at chess comes from its ability to learn the game from scratch [thus ‘Zero’]. I think it underlines that intelligence doesn’t lie in crunching vast amounts of data, or manipulating numbers rapidly… it isn’t merely more powerful computers.”

The impact of this apparent silicon intelligence extends beyond chess. Given no domain knowledge, except the rules of the game, AlphaZero also convincingly defeated a world-champion program in the far more complex board games of shogi (Japanese chess) and Go; and it did so through self-learning.

Thus, AlphaZero—unlike programs like Deep Blue that are good at doing the one thing they are programmed to do—may well mark the point when a truly flexible computer was born.

Murray Campbell, a distinguished research staff member at the IBM TJ Watson Research Center in New York, is a veteran of AI research. As one of the three developers in the team that built Deep Blue. He dismisses the ‘brute computing force’ theory as a misconception: “Deep Blue had minimal use of previous human games. It had to calculate billions of possible move sequences and choose the best  next move, which, by any accepted definition, is AI,” he says.

Speaking to Forbes India from New York over the phone, Campbell agrees AlphaZero’s feat is impressive, but sounds nonchalant about the hype and hyperbole. He says board games—governed by well-defined rules—are much simpler than many real-world problems. “We [AI researchers] need to move beyond [board] games. They don’t have the complexity of real world problems like understanding the subtleties of language, for instance,” says Campbell. “Achieving human-level understanding of language remains a goal in Artificial Intelligence research.”

At IBM’s labs, considerable effort is being expended in making machines understand language the way humans do. The company in June showcased Project Debater, which successfully debated humans extempore. “Given a completely unfamiliar topic, it [Project Debater] can give you both points of view, the pros and cons. And that’s useful in making complex decisions,” explains Campbell. He says the way forward for AI is to combine machine learning approaches with reasoning approaches. “This will help us tackle real world problems.” Campbell agrees that we are still in a preliminary stage of AI research.

“We are still far from being in an age of true machine intelligence. There are other aspects [apart from board games] of intelligence: Introspection, emotions, reflecting on the nature of intelligence itself and more,” says D’Souza, who was part of the AI research team at the University of Texas’s Computer Science Department in 1988-89, and is now an independent writer.

If we restrict ourselves to board games, AlphaZero’s exploits are a triumph of true machine intelligence. Nonetheless, there are miles to traverse before the age of true silicon intellect dawns.