The Benelli TNT 300 is a striking motorcycle 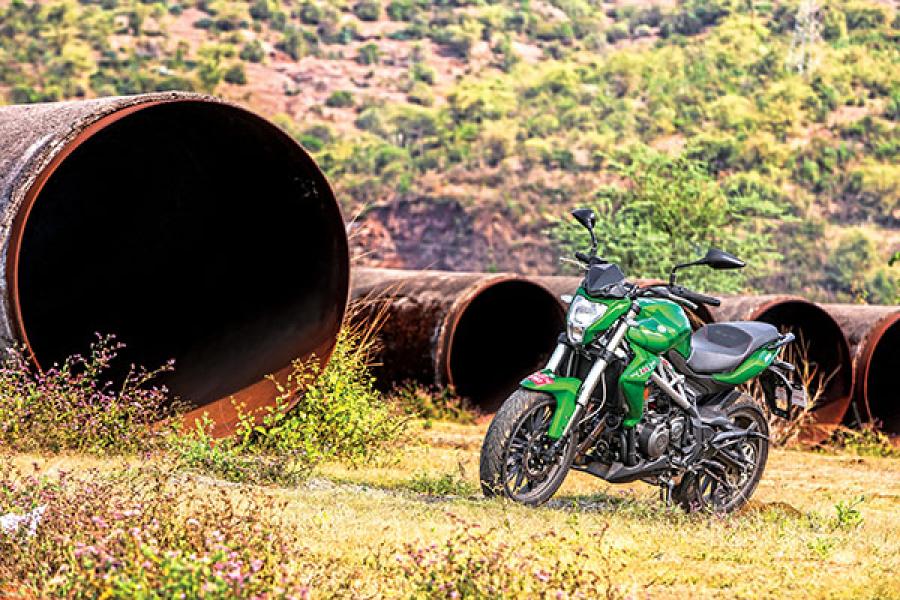 The Benelli TNT 300 sits in a tantalising spot in the motorcycle market: This is where the Indian motorcycle enthusiast gets the first multi-cylinder option. However, this is also the arena from which the Suzuki Inazuma has retired, and in which the Kawasaki Ninja 300 and Z250 battle valiantly without success.

The TNT is available in more colours than one, and its green-and-silver combination is easy to mistake for Kawasaki’s. In fact, the TNT 300 does have too many Kawasaki Ninja 650/ER-6n cues: The tank’s shape, the side-mounted monoshock and other elements. However, it is a striking motorcycle with good overall finish and there are only some detail niggles, for example, welds on the trellis frame. 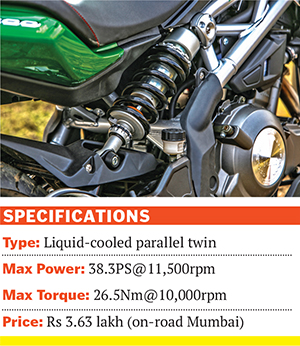 But the TNT 300 isn’t about flat-out fast work. Its greatest asset is its big singing voice. At idle, there’s a deep, bassy twin-cylinder thrum that leads to a lovely, slightly understated roar. At speeds up to 120 kmph, there are very few vibes at the bar or pegs. This combination should be good for highway work. Interesting still is the nature of the performance—the unhurried, vocal nature of the engine suggests a motorcycle like the Inazuma. It’s a more laid back, a more mature taste of twin-cylinder motorcycling.

The model that comes with Pirelli tyres is grippy and confident at high lean angles but doesn’t have the effortless performance of the Metzelers on the KTM 390. The chassis is responsive but relaxed. The ride is generally comfy but could stand to handle sharp bumps a little better. I am not happy that ABS brakes are not even an option on the 300.

Its biggest hurdle though, is the price. At Rs 3.63 lakh on-road Mumbai, it is expensive for its performance. It needs a certain maturity to be able to get out of the horsepower chase and appreciate calmer bikes. Indian customers haven’t acquired the trait yet.

Tweets by @forbes_india
Beautiful People: Reflecting on a world of clones
'Improbable' merchants of parallel worlds