The Mercedes-AMG G 63 is a unique and mad vehicle

How towering horsepower and audacious colours make up inverted snobbery 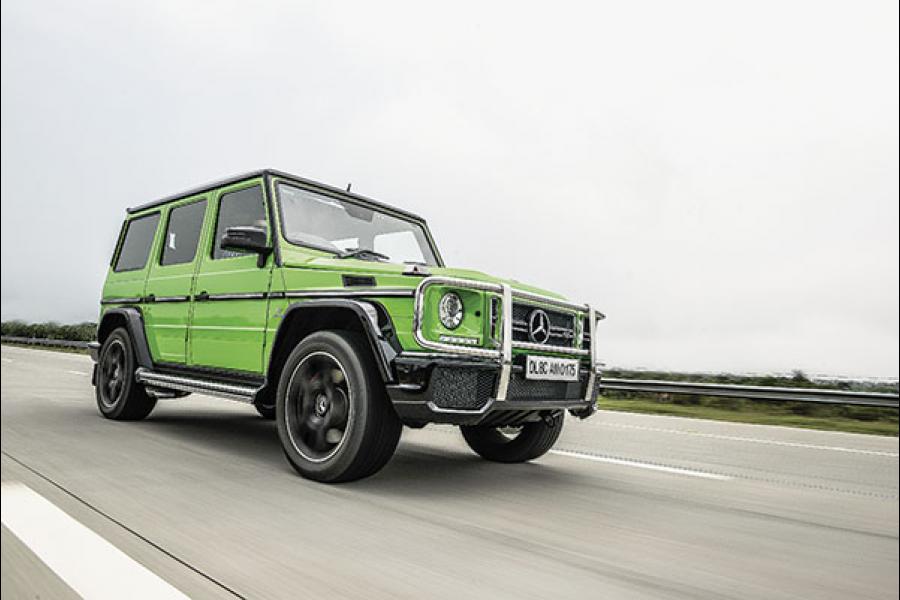 In 1972, the Shah of Iran, a major shareholder in Mercedes-Benz at the time, decreed that a purpose-built, cross-country military vehicle be conceived in the form of the Gelandewagen. Seven years later, the G-Class—a commercially available version of the G-Wagen—was available for civilians. Even in brand-conscious India, the G-Class’s resemblance to people-movers like the Force Trax, Mahindra Bolero and Tata Sumo didn’t stop it from becoming one of the highest-selling cars in the AMG portfolio.

Mercedes-Benz has now launched the Crazy Colour Edition of the G-Class in India. The crazy part isn’t pumping over 500 horsepower into something with the drag coefficient of a bread box, it’s the outlandish colours: Tomato Red, Sunset Beam Orange, Solar Beam Yellow, Alien Green and Galactic Beam Purple.

The G-Class is offered in India in the form of the twin-turbo G 63 AMG engine. The design language remains utilitarian on the outside, and brimming with luxury on the inside: Mercedes’s flagship Comand infotainment system with a 7-inch TFT screen, the Harman Kardon Logic-7 music system with 12 speakers, a 10-channel amplifier and a 450 watt Dolby Digital surround system, and DVD players and screens for rear passengers too.

The G-Class is a typical vehicle built from a left-hand-drive architecture. The knee-room on the back-seat is appalling for a vehicle this expensive. Thankfully, there’s plenty of head and shoulder room. The body rests on rubber mountings, so there’s less vibration in the cabin and Mercedes has done a good job of insulating the noise.

In India, the G-Class gets the G 63 AMG, which houses a 5.5-litre, twin-turbo, V8 petrol engine; it is an ‘off-roader’ with supercar-like performance. The 2,550 kg mammoth can hit 100 kmph in a claimed 5.9 seconds (no thanks to the non-existent aerodynamics). 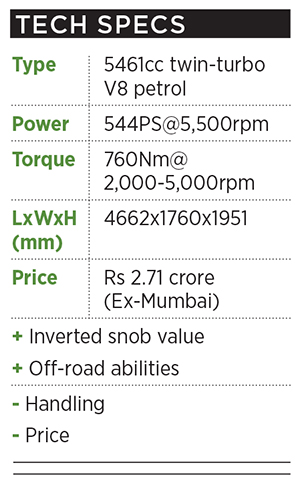 The steering set-up has no gaiters or rubber bellows, and uses a traditional re-circulating ball mechanism that doesn’t transfer the shocks from the terrain to your wrists. It also gets the 7G-AMG SpeedShift Plus automatic gearbox with paddle shifters, which lets you choose between Comfort, Sport and Manual modes.

Despite the conventional rigid axles, the ride quality of the G-Class is adequately plush, notwithstanding the body roll and pitching under braking, and the slightly stiff suspension set-up.

It has permanent all-wheel drive with low ratios which you can select on the fly under speeds of 40 kmph.

The G-Class occupies a unique headspace: Many before me have called it inverted snobbery. There is madness in its very existence, which has now been exacerbated by the audacious colours. And then there is that crazy price you pay for it.