DBS looks to expand its mobile-only Digibank in India

The Singapore-based bank aims to increase its India footprint through Digibank, its mobile-only banking platform 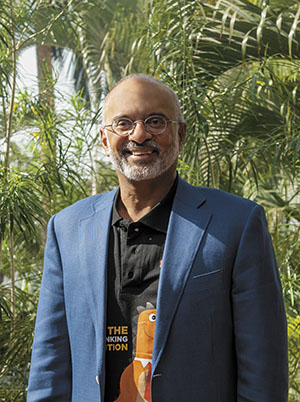 After having a not-so-impressive performance in the country so far, DBS is making its strongest bid to expand its retail presence in India, which, along with China and Indonesia, is now part of the trinity of strategic markets for growth  identified by the DBS board. India is the only country in which Digibank has been introduced (in April), with plans to roll it out in Indonesia and China over the next 12 to 18 months.

Taking advantage of the existing infrastructure—mobile phone and internet penetration, Aadhaar card-related and PAN card-related information (gathered and verified by the government)—DBS’s Digibank is completely branchless and paperless. Becoming a customer would require a one-time biometric authentication process at any of the 500 Café Coffee Day outlets in eight cities.

“The future of banking is going to be substantially different from what we have seen. It is on the cusp of a major revolution. If you think of the last five years and see the changes in retail, taxis, travel and music, it is happening industry by industry,” says Piyush Gupta (56), the chief executive officer and director of the Singapore-headquartered financial services major DBS Group. Banking had been different from other sectors, he adds, because it was regulated and the psychology around money has been different. “Banks themselves have been distracted by issues like Basel norms, capital adequacy and liquidity concerns [post the 2008 global slowdown]. But, in the next five years, we will see a tremendous transformation in the way banking is done.”

India before China
DBS had started on its digitisation curve around 2012-13 by investing in technology infrastructure. However, after its bid to acquire Indonesia’s Bank Danamon fell through in 2013, the group changed its strategy from growth by acquisition to growth by digitisation. “Expansion would [now] need to be through digitisation. We had spent a lot of time re-architecting our backend technology. At our strategy meeting in Seoul in 2013, the board concluded that the time was right to completely rethink, step up and revolutionise the way we banked,” Gupta says. 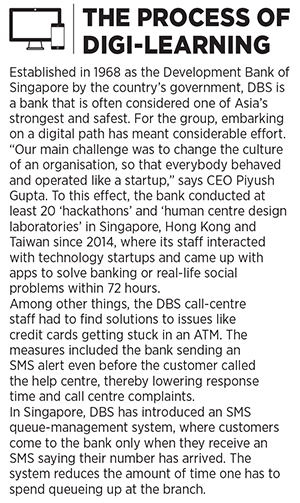 In the last few years, DBS has spent more than SGD 2 billion (US $1.45 billion) to strengthen infrastructure, and improve the resilience of its networks and hardware. Unlike other Western global banks, it was not limited in terms of capital or liquidity: The Asia-focussed bank has total assets of SGD 458 billion (US $332.4 billion) and reported a record net profit of SGD 4.45 billion (US $3.22 billion) for the year ended December 2015. Compare this with Bank of America, which had total assets of $2.1 trillion and a net profit of $15.9 billion for the same period.

DBS’s digital strategy was also spurred by Gupta’s concern for the way in which Alibaba, China’s ecommerce behemoth, entered several aspects of businesses that were traditionally carried out by banks, like payments and credit ratings. “Alibaba’s finance affiliate company [Ant Financial] has created its own credit bureau Sesame. They have the fastest growing loan book. They are one of the biggest payment companies, with zero branches,” says Gupta. “If consumers are willing to accept it from an Alibaba or a Wechat, then why not from an integrated banking provider? That is our basic premise.”

But instead of launching in China—a significant market for DBS—Digibank was started in India. Gupta says that even though the country is three years behind China in terms of smartphone penetration and usage, it offers a unique stack in the form of an architectural framework that is still being created. This includes an existing eKYC (know your client) system and the Aadhaar authentication framework, electronic signatures and digital lockers, the recently launched Unified Payments Interface (UPI)—which allows for swift payments across banks—and finally, a consent system where customer information is made available to anyone else for use. “This type of architecture is not available in the US or in China. India is one of the few countries that have put together a public architecture to enable this tele-services system,” he says.

This also means that DBS’s Digibank will be competing with mobile payment systems such as HDFC Bank’s PayZapp, ICICI Bank’s Pockets, Axis Bank’s Lime, and State Bank of India’s SBI Buddy, along with mobile wallet companies like Paytm and MobiKwik.

However, DBS did not want to limit itself to being a payment solutions provider. “A payment capability is hard to be profitable. Payments are a reasonable part of the financial banking wallet but not a large part. It is very important if it is the marginal product; that is, if you have the capability of being a complete bank, [and] then if you create a payment revenue stream on top of that, to create customer stickiness,” Gupta says.

DBS plans to build a liability book of Rs 50,000 crore and an asset book of Rs 10,000 crore in the next three years for its Digibank platform, and will introduce investment products like mutual funds, insurance and consumer loans over the next six months. To woo new customers, it is offering savings account interest rates of 7 percent, and is looking to have 5 million Digibank accounts in the next five years.

In May, DBS brought on board Bank of America’s former chief technology officer Mohit Kapoor to head its Asia Hub2 in Hyderabad, the bank’s largest technology hub outside Singapore.

Nanoo Pamnani, Bajaj Finserv’s vice chairman and a veteran Citibanker across Asia, says, “Piyush [Gupta] was always execution-oriented and creative. In his early days, though not senior enough in the team, he would start heading projects without making the team feel that he was the boss. Piyush was what in Citibank circles we called ‘corporate property’. When I think of those who excelled from Citi, I can think of [HDFC Bank chief] Aditya Puri and Piyush Gupta.”

Route recalculation
Despite a strong global presence, with over 280 branches across 18 markets, DBS is a lesser-known foreign bank in India, with just 12 branches in 12 cities. The bank has between 35,000 and 40,000 customers in India, despite opening its first branch 20 years ago; the country contributed less than 5 percent to DBS Group Holding’s total revenues of SGD 10.92 billion for the year ended December 2015.

DBS’s India report card might not have been the best so far. In FY2015, DBS India posted a loss of Rs 275 crore, mainly due to higher provisioning and cleaning up of its portfolio of bad loans of previous years, when it had lent to medium-sized companies. In FY2014, DBS’s net non-performing assets (NPAs) as a percentage of the total loan book was 10.20, which improved to 4.15 percent for FY2015, Gupta says. He adds that DBS India is expected to return to a “small profit” in FY2016, insisting that the worst is behind them for the India operations.

“DBS did not have a well coordinated strategy for international expansion earlier,” he says. “A lot was usually dependant on the local general manager and his vision.” To remedy that, the bank has developed a two-pronged strategy: Apart from Digibank, DBS will continue to expand its business through SME lending, wealth management and transaction business.

In 2015, DBS applied to the Reserve Bank of India to set up wholly-owned subsidiaries (WOS). (The RBI’s 2013 guidelines for a WOS policy for foreign banks was a step towards providing them with a level playing field with domestic banks in terms of branch network and access to markets. At present, all foreign banks operate in India through branches or representative offices.)

Once it secures RBI approval, DBS plans to expand to between 60 and 70 branches in India, which is expected to help increase its SME lending. DBS operates through subsidiaries in all its big markets—Hong Kong, China and Taiwan—where SME lending activities are already strong. DBS Group’s income from SME banking grew 9 percent to a record SGD 1.53 billion in 2015 from a year earlier. “The WOS will help build out an SME footprint,” says Gupta. “In the meantime, we can build a stronger retail footprint in India through digital.”

But the SME pie that DBS is eyeing is already in the crosshairs of several banks and non-banking financial companies (NBFCs), as the sector is expected to be a key area for growth. “SME lending is like a sponge. It ranges from reaching out to small private limited companies, service providers and other small businesses,” says Manish Shah, co-founder and chief executive of BigDecisions, a personal finance firm owned by global media services company News Corp. “DBS’s digital strategy for India is sound but execution will be a challenge. There may not be enough reason at the moment for customers to want to switch to a mobile-only bank.”

Wealth management is another critical element that DBS hopes to implement in India, given its expanding class of affluent citizens. Wealth management and SME banking contributed 27 percent to the overall DBS Group income in 2015, up from 22 percent in 2010.

“For Digibank, DBS will have to think like a digital-only player [and not just a bank] in India,” says Shah of BigDecisions. The good news is that, with the successful introduction of digital technology in Singapore and China, besides other countries, both DBS Group and Gupta have the required experience. “We are not only happy [that the core of our bank is changing], we think it is crucial,” says Gupta. “If the bank does not change we are dead.”