Adlabs Imagica: Will it be a Roller Coaster for Manmohan Shetty?

After stints in film production and exhibition, Manmohan Shetty starts an entertainment theme park. Can he turn it into a viable business? 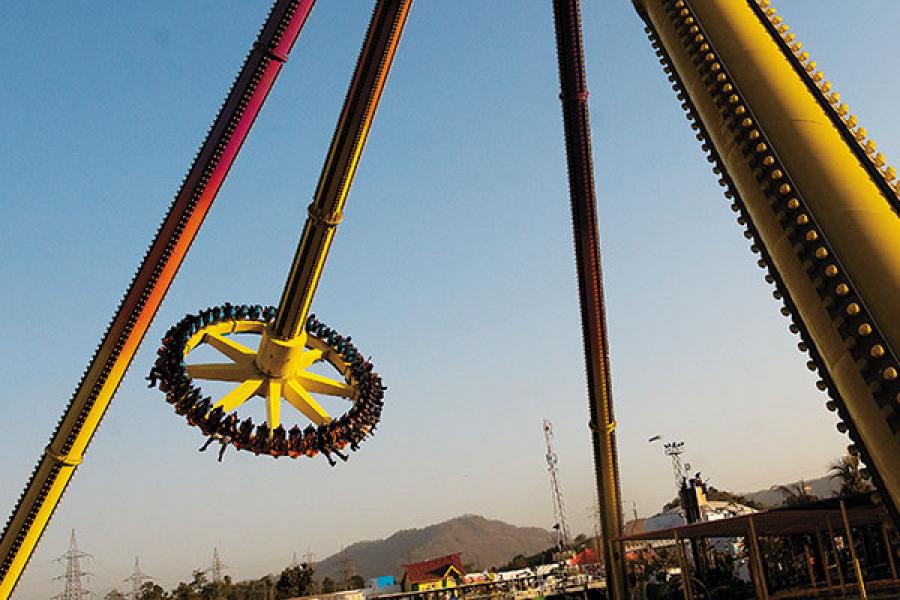 “I did it straight from the gut,” says Manmohan Shetty like any true-blooded entrepreneur. We’re standing atop Armada—a reconstructed ship that doubles as a bar on this breezy evening. A few hours ago, Shetty unveiled Adlabs Imagica, his entertainment theme park in which he’s invested Rs 1,200 crore. For the film producer-turned-entrepreneur, it is an emotional moment and it’s not hard to see why.

FLASHBACK
It was in 2008 when Shetty was first seized by the idea of a theme park. He had just sold Adlabs Films (now Reliance MediaWorks) to Anil Ambani and was looking for something to do. He often wondered about the lack of entertainment options in India. It was on this speck of idea that his dream was born, and he began surveying theme parks around the world.

SPOTTING THE GAP
Shetty, on the other hand, chooses to see the glass as half full. For him, a population of 1.2 billion (with very few entertainment options) is a large market. According to him, if in a year, EsselWorld in Mumbai can get 1.8 million visitors and Wonderla in Bangalore 1.6 million, he can surely do 2 million. Hong Kong Disneyland gets 3.5 million visitors a year, he says.

But first, he had to locate his park strategically. Shetty chose Khopoli, off the Mumbai-Pune Expressway. The 300-acre site is within driving distance of three cities—Mumbai, Pune and Nashik with a total catchment size of 30 million. On the site, Shetty plans to construct a theme park, a water park and a hotel. In the first phase, the theme park opened on April 18. With its landscaped walkways, merchandise stores, food stops and rides, it looks like a miniature version of America’s Disneyland or Universal Studios.

INDIAN MASALA
Twenty-one rides, 18 of which are already operational, clearly reflect an Indian ethos. There’s ‘I for India’ that takes people on a 12-minute ride, offering them panoramic views of the country’s top tourist attractions through a film shown on a 90-feet wide screen. In ‘Ali Baba Aur Chalis Chorr’, you get a chance to shoot with laser guns, and amass points.

Families can choose the ‘Gold Rush Express’ roller coaster, while the more adventurous can go for the ‘Scream Machine’ which rotates and swings wildly. India’s largest roller coaster ‘Nitro’ will be operational by the end of May.

Tickets, priced at Rs 1,400 on weekdays and Rs 1,900 on weekends, allow visitors to take unlimited rides in the park. Food and merchandising are added costs. Imagica expects ticket sales to contribute 75 percent of its revenue, while 20 percent will come from food and 5 percent from merchandise. The first week has been consistent with this projection.

NUMBER CRUNCHING
But getting visitors can prove to be a real challenge. In the first three days since the park opened, a total of 6,000 people have dropped in. Not exactly a stellar start. Sure, the weather’s hot and it takes a while for the word to spread, but Shetty and his marketing team will have to sell the park harder to get an average of 5,500 visitors per day in order to reach the 2-million mark annually. For this purpose, it has tied up with tour operators from across the country.

If Shetty manages to get those numbers, the theme park business can throw up incredible amounts of cash. So far, he has to arrange Rs 551 crore for the venture. A consortium of banks has agreed to lend Rs 1,101 crore. Imagica has also raised money from high net worth individuals.

In the first year, Shetty intends to make Rs 300 crore, half of which will be spent in running the park at an EBIDTA of 50 percent. The company hopes to achieve operational break-even within a year and have all loans paid off in six years, according to Kapil Bagla, CEO of Adlabs Imagica. Since costs are fixed, barring those incurred in starting one new ride every year, Imagica can expect high margins.

FIRST IMPRESSIONS
Shetty is 99 percent satisfied with Imagica’s functioning. Two hypotheses have borne themselves out, he says. First, Indians dislike walking. So the park has put in place carriages that run around the peripheral road. Second, Indians get impatient when they have to queue for a ride. Imagica has made waiting areas air-conditioned and, in line with global practice, introduced VIP tickets that allow those who pay extra to stand in a shorter queue.

Shetty acknowledges that setting up a theme park is the easiest part of the business. The biggest challenge he will be confronted with is successfully running the park and providing a consistent experience—smiling staff, clean washrooms and always functional rides—day after day.

For a restless entrepreneur like him, the question arises: What is the end game? He sees himself more as a creator than an operator. He plans to scale the business up and establish viable theme parks across the country. He has tied up land in Hyderabad and plans to invest Rs 750 crore in a park. He also sees the National Capital Region as an untapped market. “Bigger than Mumbai with more spending power,” he says. Early next year, he wants to go public. And an eventual sale? “Too early to say but if there is an opportunity I would do it,” he says. For now, he’s gearing himself up for a roller coaster.