India is one of the major drivers of business travel growth in the Asia-Pacific region, which accounts for $38 of every $100 spent globally towards such travel 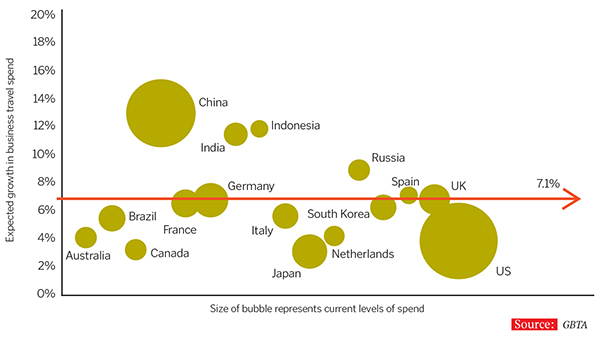 Soaring inflation, a stagnant economy and a ‘policy paralysis’ in the months leading up to the 2014 general elections forced India Inc to curtail its travel spend. After breaking into the list of top 10 business travel spenders in the world last year, the surge slowed significantly in late 2013 and early 2014 as the economy grappled with growth below 5 percent.

According to the Global Business Travel Association (GBTA), a premier business travel management group, corporate travel spend is expected to grow at 2.1 percent to $24.9 billion in 2014 (against 10.4 percent in 2013), representing India’s weakest business travel performance since the economic downturn of 2008. This belies the 2013 forecast, which had predicted that the market would grow at 13 percent till 2017.

However, the GBTA is expecting things to look up in 2015 as there has been an improved outlook for the economy, since the Narendra Modi-led BJP government came to power in May. The renewed optimism for pro-business reforms and accelerated infrastructure investment is likely to bring travel spend back on track with an estimated 7.6 percent growth to $28.8 billion.

“Business travel is reactive, not proactive. Corporate India has reacted positively to the victory of Modi and the BJP. This forecast is a very positive sign,” says Welf Ebeling, VP, Asia-Pacific operations, GBTA. 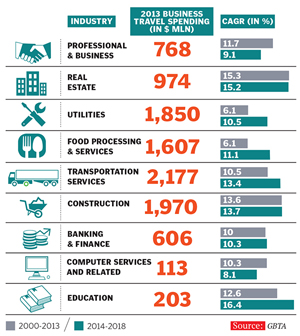 India is one of the major drivers of business travel growth in the Asia-Pacific region, which accounts for $38 of every $100 spent globally towards such travel. With weakening exports, India’s international outbound business travel has been volatile in recent years and is expected to gain only 1.1 percent in 2014. There’s a silver lining though: A renewed vigour among India’s major trading partners—China, Europe and the US—might send it soaring to 7 percent (to $2.6 billion) in 2015.

But 90 percent of its business travel spend is domestic, propelled by the growth of the middle class and the profusion of business centres in the country. “If people are buying, businessmen have to travel to sell,” says Ebeling. He belives that the pitfalls of slow outbound travel can be overcome by focusing on domestic infrastructure. “The moment exports and international outbound were down in China, they focussed on internal growth. Think about the high-speed rail projects they undertook at that time. This is where India should learn from,” he says.