What happens when COVID-19 meets toxic air? India is about to find out

One of the most common symptoms of severe coronavirus cases is breathing difficulty. And doctors say that if the ambient air suddenly becomes more toxic, as it does every year around this time in northern India, then more people who become infected by the virus might end up in the hospital or die

By Jeffrey Gettleman and Hari Kumar 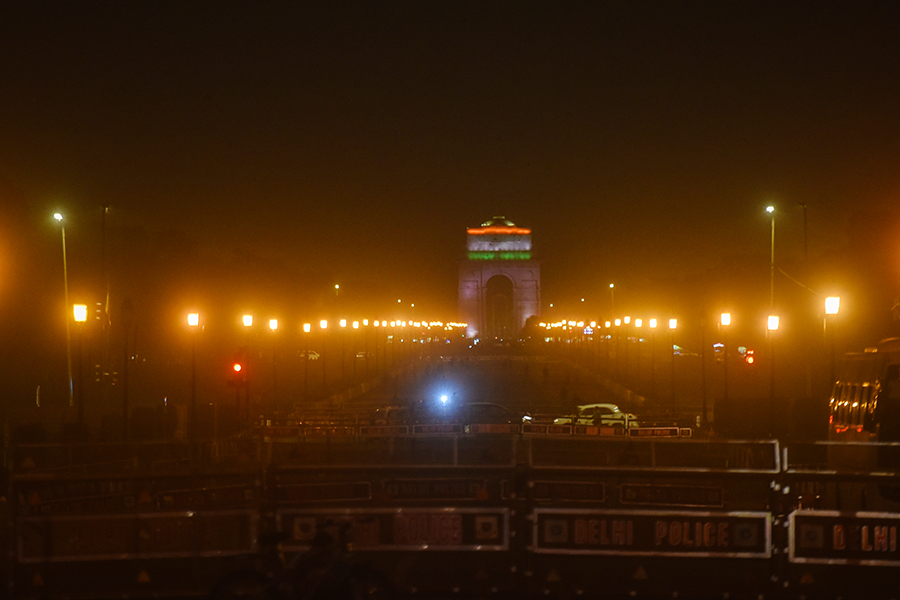 A view of India Gate engulfed in a mild haze on October 14, 2020 in New Delhi, India. Air quality in capital deteriorated as the burning of crop waste in fields sent smoke billowing across the north of the country. A smoggy haze settled over the city, reducing visibility significantly, as the Air Quality Index (AQI) rose past 300 on a scale of 500, indicating very poor conditions that pose a risk of respiratory problems, according to the federal pollution control boards guidance. (Photo by Amal KS/Hindustan Times via Getty Images)

NEW DELHI — As a thick quilt of smog wrapped itself around New Delhi on Thursday, signaling the start of the fall pollution season, doctors and scientists warned that the deteriorating air quality could make the city’s COVID-19 problems even worse. One of the most common symptoms of severe coronavirus cases is breathing difficulty. And doctors say that if the ambient air suddenly becomes more toxic, as it does every year around this time in northern India, then more people who become infected by the virus might end up in the hospital or die. “If two people are shooting at the lungs, then obviously the lungs will have more problems,” said Arvind Kumar, a chest surgeon and founder of the Lung Care Foundation in New Delhi, a group that raises awareness about respiratory problems. India is now struggling with two major health challenges that are both assaulting the respiratory system and peaking at the same time. Coronavirus cases are spreading far and wide, putting the country on track to have the largest reported virus caseload in the coming weeks. With 7.3 million reported infections, it is just behind the United States’ 7.9 million. And each day, India outpaces the United States in new infections by around 10,000 more cases per day, even as India’s death rate remains much lower. In the background is India’s vexing air pollution, which shoots up in the fall and winter. The rapid economic growth of the past two decades — and along with it, increased urbanization and congestion — has left Indian cities horribly polluted. Last year, India was once again home to 14 of the 20 cities with the most hazardous air globally, and health experts have detailed how such conditions can lead to brain damage, respiratory problems and early death. In the fall, air temperatures and wind speeds drop, condensing pollutants over India’s cities, especially in the north. And farmers in the surrounding rural areas burn the stalks and refuse from their crop, sending up huge clouds of black smoke that drift for miles. This year there have been five times the number of farm refuse fires in northern India as the same period last year, and experts say it is a bad sign of what’s to come. The agricultural sector has been a rare bright spot an Indian economy that has been shattered by the pandemic, and pollution experts fear that more farming will mean more burning. “My gut is it’s going to be a bumper, bumper harvest and a bumper, bumper combustion event, probably the biggest of our lifetime,” said Jai Dhar Gupta, an Ivy League-educated environmental activist and entrepreneur. “And now that you’ve got the combined impact of a respiratory virus and respiratory contaminants, every public health specialist is holding their breath to see what happens,” Gupta said. “We’re just sitting ducks.” Doctors say long-term exposure to severely polluted air can cause chronic lung inflammation, which can leave people who are exposed to the coronavirus more vulnerable. A recent study from Italy found a correlation between long-term exposure to dirty air and an increase in excess mortality — a measure of deaths above normal — from the coronavirus. “Pollution-afflicted areas will have a higher incidence of COVID,” said Kumar, the chest surgeon. “And once this population gets COVID, they then have a higher chance of mortality.” Up until now, people in New Delhi this year had been spoiled in terms of breathable air. When a coronavirus lockdown in the spring shut down many industries and kept cars off the road, Delhi’s skies turned a miraculous blue. It was the cleanest air in decades, and at night, residents felt as if they were being treated to a star show. Constellations that hadn’t been seen for years shone above the apartment blocks. But that has become a dim memory. The sky is back to its usual hazy brown, and the city now smells of smoke. The Delhi government is doing more this year to fight pollution, including setting up a war room to track pollution hot spots and turning to anti-smog guns that blast mist into the air to knock down the dust. On Thursday, officials in Delhi, which is controlled by a progressive opposition political party, got locked into a blame game with national politicians who are part of the right-leaning administration of Prime Minister Narendra Modi. The Delhi officials blamed the Modi government for not doing enough to stop crop burning in the states that ring the capital. Modi administration officials argued that crop burning contributed only a minuscule amount to overall air pollution, and they blamed the Delhi government for not doing enough to control dust. Many more people in India’s cities are donning masks these days because of the pandemic, but experts say this probably won’t help much. Most people wear cloth masks or surgical-type masks that don’t seal well and won’t stop someone from inhaling small pollution particles (or the virus, either). Pollution alerts whizzed around the city via WhatsApp messages Thursday. “Delhi pollution level reported hazardous. 335,” read one message, referring to an Air Quality Index reading of 335, about six times as bad as that of New York City. The message continued: “Be Careful. Seniors don’t go out. Wear mask.”

Tweets by @forbesindia
The untold story of 'Swiggy Aunty'
Photo of the Day: Kolkata preps for a safe Durga Pujo