Rise of Mobile Internet in India 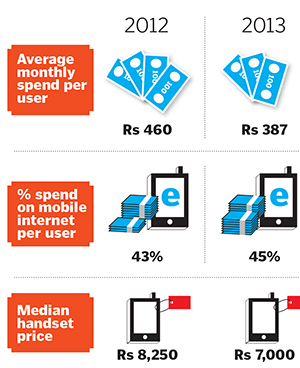 More and more Indians are logging on to the internet through their mobile phones, says a recent report by the Internet and Mobile Association of India (IAMAI). The study predicts that, by the end of March 2014, there will be 155 million mobile internet users in the country; a rise of 19 percent from 130 million in December 2013. Although urban India accounts for more than 80 percent of this usage, a larger portion of India’s population is also seeing increasing usage.

The declining prices of smartphones have contributed to this trend, with manufacturers wooing users with ‘value for money’ handsets. By June 2014, it is estimated that mobile internet users will account for 60 percent (nearly 185 million) of the overall internet users in the country.

Globally, China leads with 300 million mobile internet users, followed by the US with 207 million.

Tweets by @forbesindia
Monetary Repression: The End of Trust
The Steady Rise of Pune's Kolte-Patil Developers