In the 10 years since it started, NH7 Weekender has featured over 600 artistes from India and around the world. But the festival has not been without its share of controversies 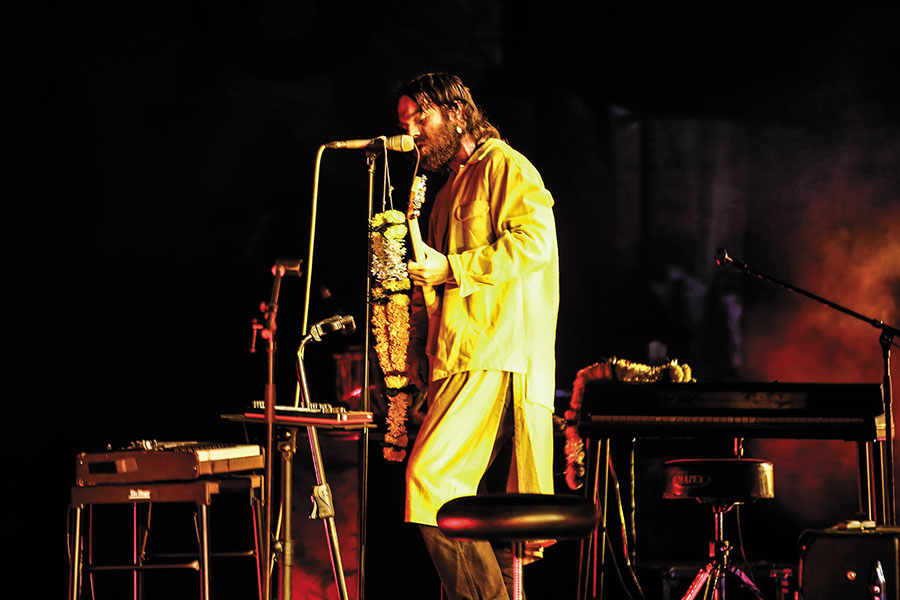 Nick Murphy, one of the headline acts of the Pune edition
Image: Jishnu Chakraborty

Dressed in a yellow kurta, with a garland around his neck and a tilak on his forehead, Australian singer-songwriter, Nick Murphy aka Chet Faker seemed to have fallen in love with India on his first visit. And India seemed to return the sentiment. “I love you Nick, marry me!” shouted a young woman as the man who solo-travelled the world for four years recording vocal tracks in spaces that inspired him for his album ‘Run Fast Sleep Naked’ (April 2019) took the stage at the 2019 edition of Bacardi NH7 Weekender Pune last month.

The show was packed, and some people in the crowd had bought tickets just to see him perform on the last day. Spread across the sprawling 30 acres of Mahalakshmi Lawns in Pune, the festival was a three-day story of sold-out tickets, six stages and a vibe that stayed with the crowd long after the festival was over.

NH7 Weekender has come a long way from when it first started in Pune in 2010 with just four stages, 35 artistes and 3000 attendees. In its tenth year, the Pune edition saw over 100 artistes across genres like indie, metal, rock, electronic and a whopping 65,000 attendees over three days. One of the biggest music festivals in India, conceptualised by Only Much Louder (OML Entertainment), NH7 has featured over 600 artistes from India and around the world across genres, and has expanded to include weekends in Bengaluru, New Delhi, Kolkata and Meghalaya.

“When we started, we just wanted to bring people who love music together, especially the independent music community. We have 20 percent international artistes and 80 percent local talent. And we like to keep it that way because we want to celebrate homegrown talent,” says festival director Supreet Kaur. 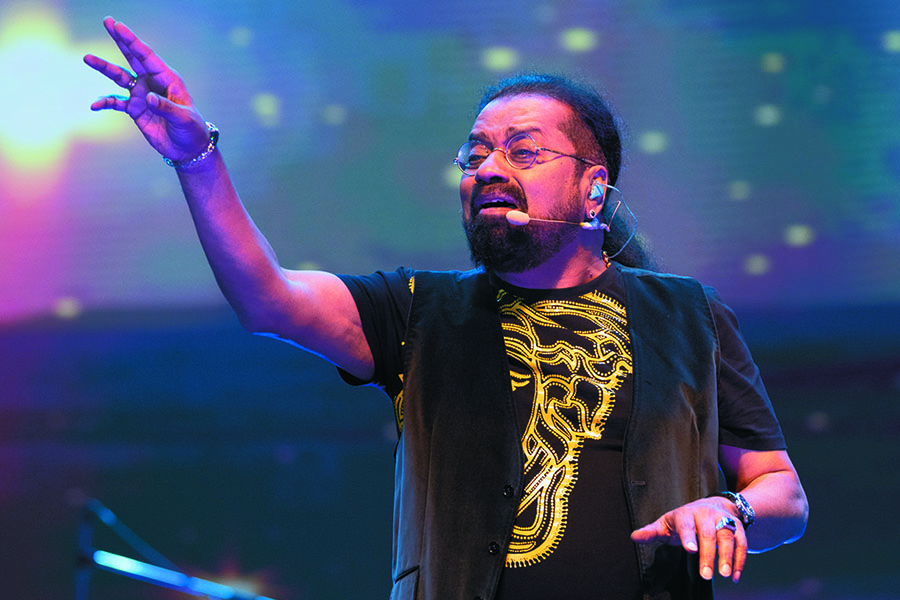 Hariharan A, who used visuals to keep the audience engaged
Image: Vikram Chandrashekar

Twenty-two-year old Ritviz Srivastava is one of the artistes who first performed at NH7 Weekender Delhi in 2015. That year, Srivastava had just opened for another artiste. “When I was playing, there was literally no crowd, except for my parents,” he recollects. A week after the launch of his song Udd Gaye in 2017, he again played at NH7 Weekender, this time in Pune. “I was so nervous, I wasn’t sure if people even knew about this song. But 3,000 people turned up. That is where I found my audience and the crowd started recognising me. As an artiste, I’ve got a lot of opportunities after performing at NH7. This year I was headlining the electronic stage for the second time and almost 4,000 people turned up. Weekender is special to me because I’ve grown from zero audience to thousands,” he says. Celebrating a decade of bringing local and international acts, the 2019 edition in Pune had performances by Irish rock band Kodaline, Ritviz, Indian Ocean, pop and folk band Easy Wanderlings, Faridkot, Midival Punditz, Swarathma among others. The likes of Nick Murphy aka Chet Faker, Hariharan A and Brodha V used visuals extraordinarily to keep the audience engaged while Malayalam folk-fusion artiste Job Kurian set a foot-tapping mood. The festival’s headlining acts included Opeth and heavy metal performances by PENGSHUi, Bhayanak Maut and Gutslit. The festival also saw performances by Kokoroko, Wadalis, Sandunes, Lifafa, Garden City Movement and Swadesi.

“I’ve attended all 10 editions of NH7 Weekender Pune and the festival has given me some very special memories over the years. Of course, I’ve been able to see some of my favourite international bands live—Karnivool, TesseracT and Opeth will top that list; but I’ve also discovered some great music out there, and often from genres I don’t traditionally listen to,” says Deepak Gopalakrishnan, a freelance writer from Mumbai. “It’s got such a diverse line-up that those who are open-minded enough will certainly find something new to discover.” 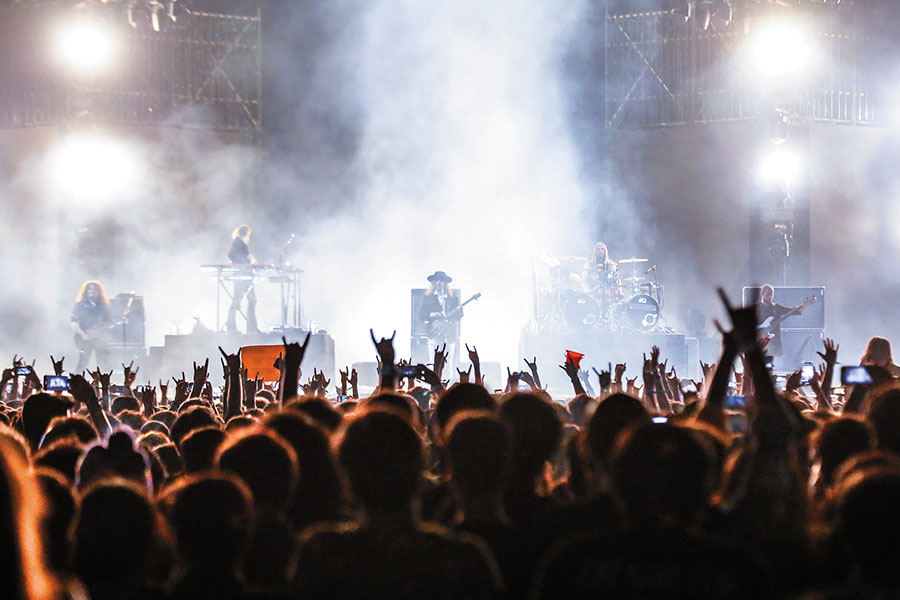 Over 100 artistes and 65,000 music aficionados attended the 10th edition of Weekender in Pune
Image: Jishnu Chakraborty

In 2017, the festival also brought in standup comedy. “It just makes sense to have different entertainment experiences at a festival where there is such a huge overlap of an audience that appreciates both music and comedy. Ultimately, it’s a coming together of different artistic expressions that are cultural products,” says festival director Kaur. The comedy stage too was packed throughout as the festival showcased comedians like Biswa Kalyan Rath, Kanan Gill, Kenny Sebastian, Zakir Khan and Sumukhi Suresh, some of whom brought in a different element to standup through singing, music and mind games.

The festival has been its share of controversies. In 2018, there was a call to boycott NH7 Weekender following allegations of sexual harassment against OML employees. Despite several attendees calling off their plans to attend the fest and artistes such as Bengaluru electronica producer Disco Puppet and New Delhi indie label Azadi Records pulling out, Weekender survived. “There was very little impact of the whole controversy in 2018 and it didn’t affect footfall,” says music journalist Amit Gurbaxani. “In fact, it was more. As far as I know, none of the artists even mentioned it on stage. There was this one person walking around with a placard, that’s all.”

The festival also took up some interesting initiatives this year. They partnered with NGO The Humsafar Trust and 6 Degrees to make the space LGBTQ-friendly, with a safe space on ground to provide counseling to anyone in need. Besides, there was the Project Paper Bridge, which aims to build libraries in the remotest corners of India and attendees could donate books. 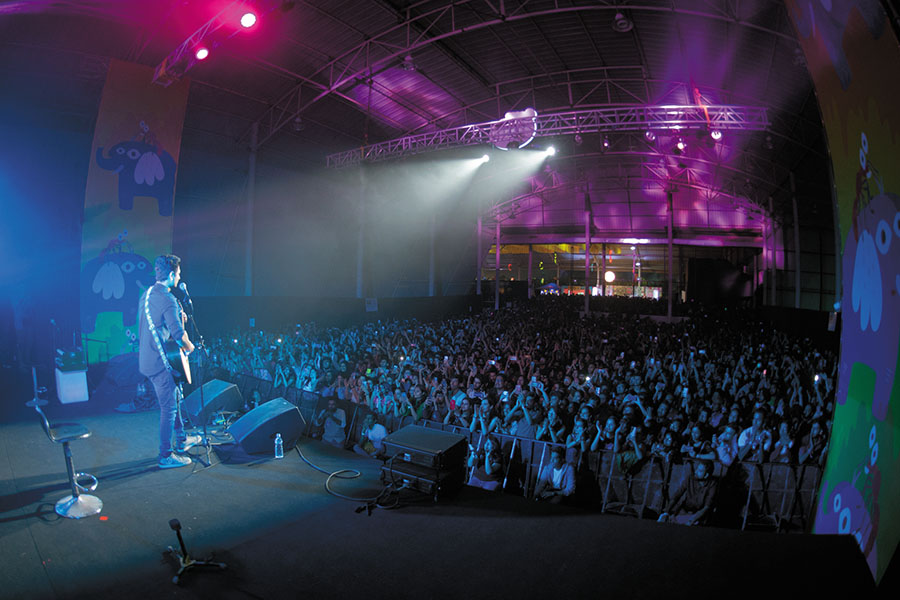 A few years ago, the festival partnered with Skrap to ensure it generates as little disposable waste as possible. Skrap provides sustainable waste management solutions for events and organisations. “NH7 is actually the first festival where we piloted our end-to-end waste management project. Each year we keep piloting new sustainability initiatives. We’ve partnered with NGO SWaCH in Pune and follow a decentralised waste management system. We don’t want to send it out to a facility where we don’t have insight and control. Everything is done here, in the backyard of the festival,” says Divya Ravichandran, founder, Skrap Waste Management.

Attendees were also urged to reuse their cups to get a discount on their next drink. “We were unsure whether this would work or not, but over 70 percent people came back for refills,” adds Ravichandran. Plastic straws were banned and drinks were served in rice husk glasses while the food stalls used compostable cutlery. The festival worked with Cupable to provide drinking water—people could purchase one recyclable cup and get unlimited water refills for all festival days. “Last year we collected about 10-12 tonnes of waste, out of which over 85 percent was reused or recycled,” says Ravichandran.

Meanwhile, the organisers are already looking ahead to continue providing a platform to independent music artistes to showcase their talent. “Some of us work through the year to make it happen. We’ve already started reaching out to artistes for 2020,” says Kaur.

“ The NH7 Weekender has got such a diverse line-up that those who are open-minded enough will certainly find something new to discover.”
Deepak Gopalakrishnan, freelance writer

Gaurav Raina of Midival Punditz, who has been performing at Weekender for five years, believes festivals like Weekender don’t just provide a platform. “Weekender and a bunch of other promoters all over the country are responsible for letting Indian musicians know that there is a career in music. Earlier it was not considered as a career because of unavailability of such platforms. Today, artistes who would normally not be musicians full time are taking it up and that’s saying something good about the future,” says Raina.

Freelance writer Gopalakrishnan agrees. “As a musician once told me—at Weekender, no matter who you are or what you play, you will find a supportive audience. And I think that’s amazing.”

Tweets by @forbes_india
Of Mishti, Mughals and Noodles: A history of Kolkata's street food
Ten interesting things we read this week