The survey, by the polling firm YouGov, found that 72% of Indian American voters planned to vote for Biden, with just 22% planning to go for President Donald Trump 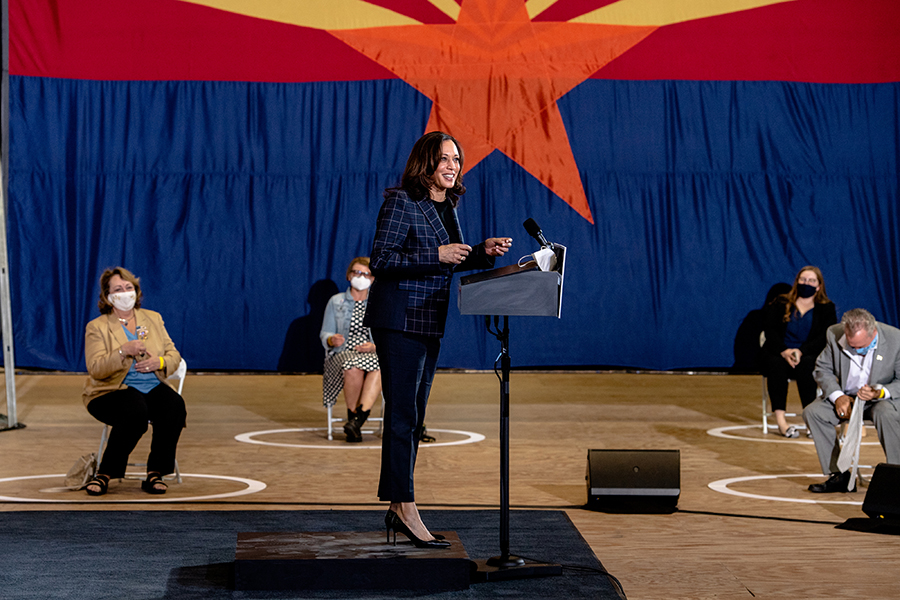 CHICAGO — A large majority of Indian Americans plan to cast ballots for the Democratic ticket of former Vice President Joe Biden and Sen. Kamala Harris, according to a survey released Wednesday, despite elaborate overtures by the Trump White House to win their support. The survey, by the polling firm YouGov, found that 72% of Indian American voters planned to vote for Biden, with just 22% planning to go for President Donald Trump. While Indian Americans hold a wide variety of political views, the presence on the Democratic ticket of Harris, whose mother immigrated from Chennai, India, has had a galvanizing effect on a voting bloc that could help Biden in battleground states like Pennsylvania, Florida and Michigan. Their potential impact on the presidential election highlights the growing importance of Indian Americans in U.S. politics: As the second-largest immigrant group in the country, Indian Americans are gaining influence, making political donations, vocally supporting candidates and causes and, most notably, running for office, from the school board to Congress. “We have arrived,” said Ramesh Kapur, a Democratic Party fundraiser. Kapur, 72, who owns a gas processing and distributing company in Medford, Massachusetts, and supported Harris’ 2016 Senate race and her run for the 2020 presidential nomination, said that Indian Americans donated $3.3 million to the Biden Victory Fund at a single fundraising event he organized in September. But Harris isn’t the only reason many Indian Americans support the Democratic ticket this year, Kapur said. They are also turned off by the president’s frequent attacks on immigrants and people of color, despite standing to gain from Trump’s economic policies. “Even though they are supposedly saving taxes, to the Indian American community, when you get the president of the United States saying to an elected official, ‘Go home,’ that scares the hell out of us,” he said, referring to Trump’s tweet in July 2019 about a group of four minority congresswomen. While the approximately 2 million Indian American voters comprise less than 1% of the electorate, they are voters who both parties seek to attract. The larger Indian American population is twice as rich as the rest of the country as a whole, and two times as likely to hold a bachelor’s degree or higher. And at the rate the community is growing — doubling in size every decade since the 1980s — they represent an increasingly formidable force in U.S. politics. The apparently wide support among Indian Americans for Biden comes despite high-profile efforts by Trump and the Republicans to win their votes. A year ago, Trump drew 50,000 people to a rally in Houston with India’s prime minister, Narendra Modi, an event that organizers called “Howdy, Modi.” The prime minister, a right-wing populist whose bellicose views on two of India’s rivals, Pakistan and China, helped win his party a landslide reelection in 2019, and who has generally received support from the Indian diaspora, lauded Trump’s name as “familiar to every person on the planet.” He returned the favor in February with an even larger spectacle for Trump in India. The rallies did win Trump some support, said M.R. Rangaswami, the founder of Indiaspora, a nonpartisan group that promotes the interests of Indians in the United States. “Trump has invested in India, has invested in Indian Americans with the ‘Howdy, Modi’ visit and with going to India, and it has shown results,” Rangaswami said. “The question is: Will it outweigh the Kamala factor?” Indeed, the survey reported that 45% of respondents said that Harris’ nomination had made them more likely to vote, and 49% said they were more enthusiastic about supporting Biden. It also showed that respondents cared more about health care, the economy and the environment than U.S.-India relations. YouGov conducted the survey as part of a research project by the Carnegie Endowment for International Peace, Johns Hopkins University and the University of Pennsylvania. Trump has also lost some favor in India, where the news media criticized him for casting doubt on the integrity of Indian government coronavirus statistics during the presidential debate last month. Rangaswami, who attended the Houston rally and is registered as an independent, said the audience appeared to consist largely of older Indian Americans, who he said leaned conservative and most likely voted for Trump in 2016. That Indian American voters lean liberal overall is partly because a younger generation, born in the United States, is far less convinced by the conservative cultural mores brought by their parents and grandparents from India, Rangaswami said. “There’s definitely that schism in the Indian American community,” said Raj Bhutoria, 20, a junior at Claremont McKenna College in Claremont, California, who has dreamed of running for office since working as a volunteer on the successful 2016 campaign of Rep. Ro Khanna, D-Calif., an Indian American. Khanna’s victory and Harris’ nomination show that “now being Indian is no longer a barrier to run for office or get elected,” Bhutoria said. Despite wishing that the Democratic nominees were more progressive on some issues, Bhutoria said he was supporting them — though with perhaps less gusto than his parents, Ajay and Vinita Bhutoria, Bay Area tech entrepreneurs in their 40s who, as avowed liberals, are somewhat of an exception for their generation. They have starred in three ads supporting the Biden-Harris campaign, set to Bollywood music and featuring slogans in a variety of Indian languages. Bhutoria cited Trump’s trade disputes with India, pressure on countries not to trade with Iran — an important source of cheap oil for India — and the suspension of H-1B visas for high-skilled workers, a large number of which go to Indians. “The ‘Howdy, Modi’ event was wonderful to look at, but they were only beautiful picture moments,” he said. “Trump has not done much for India or Indians Americans.”