After selling his pioneering virus-fighting firm in 1994 and losing most of his fortune during the 2008 financial crisis, McAfee led a peripatetic life that included a turn to paranoia and a string of arrests around the globe 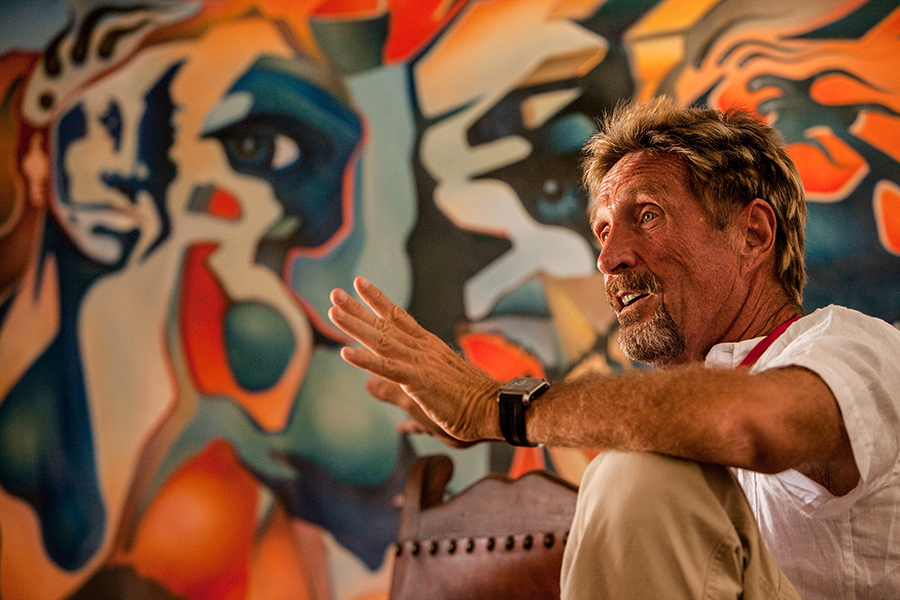 John McAfee in the main house of his property in Rodeo, N.M., on June 4, 2009. McAfee, the founder of the antivirus software maker bearing his name, died in a prison in Spain on Wednesday, June 23, 2021, the same day a Spanish court ruled that he could be extradited to the United States on tax-evasion charges. He was 75. Image: Chris Richards/The New York Times

John David McAfee, the founder of the antivirus software maker bearing his name, died in a prison in Spain on Wednesday, after a Spanish court said that he could be extradited to the United States on tax-evasion charges. His death was confirmed by his lawyers. He was 75.  After selling his pioneering virus-fighting firm in 1994 and losing most of his fortune during the 2008 financial crisis, McAfee led a peripatetic life that included a turn to paranoia and a string of arrests around the globe. That all culminated in his detention in Spain in 2020 after prosecutors in the United States accused him of not filing tax returns for several years. The indictment filed by the Justice Department said McAfee had earned millions from “promoting cryptocurrencies, consulting work, speaking engagements and selling the rights to his life story for a documentary,” and had tried to avoid taxes by using cryptocurrency and channeling the money through bank accounts. He could have faced prison time if convicted. McAfee said he had been arrested despite paying “millions of dollars in taxes” and resisted extradition, claiming he faced political persecution for denouncing corruption in the Internal Revenue Service and opposing the fiat money system, in which central banks like the Federal Reserve control the money supply. But on Wednesday, the Spanish court released its decision to allow the Justice Department’s request to extradite him, saying there was “no supporting evidence that such a thing could be happening.” “The social, economic or any other relevance the defense claims the appellant possesses does not grant him any immunity,” the ruling stated. “When I heard of John’s impending extradition, my team was fully prepared to fight for his innocence before the United States courts,” said Andrew B. Gordon, one of McAfee’s lawyers. “We knew he would appreciate the opportunity to share his story and put the false charges against him to rest. Only hours later, we were shocked to learn of his untimely death.” The justice department for the Catalan region of Spain said that, pending an investigation, it was treating his death as a probable suicide. It said in a statement that McAfee had been found in his cell and died despite efforts by security guards and prison health care officials to revive him.  Before his troubles with U.S. federal law enforcement, McAfee was at the center of a media frenzy surrounding the death of a neighbor in Belize. In 2012, he fled his home there after the police called him a “person of interest.” The government of Belize had also raided his house more than once, looking for evidence that he was assembling a militia and dealing in narcotics. Within a few weeks, McAfee was arrested on charges of illegally entering Guatemala, where he had sought political asylum.  By 2015, he was back in the United States and, after an arrest in Tennessee on gun and drunken-driving charges, ran for president as a Libertarian, with his campaign video declaring, “Here’s to the crazy ones.”  Last October, the Securities and Exchange Commission accused McAfee of promoting initial coin offerings — deals for cryptocurrencies — on Twitter without disclosing that he had been paid to do so. The SEC said McAfee had pretended to be independent and impartial but had received more than $23 million for stirring up interest in the offerings.  McAfee grew up in Roanoke, Virginia, the son of a road surveyor and a bank teller in an unhappy marriage. He said in press reports that his father was a severe alcoholic who beat him and his mother, and who fatally shot himself when McAfee was 15.  “Every day I wake up with him,” McAfee told a reporter for Wired magazine in 2012. “Every relationship I have, he’s by my side; every mistrust, he is the negotiator of that mistrust.”  McAfee Associates, the software company that he founded, was once a household name in computer security. He started it in 1987 in his small house in Santa Clara, California, in response to the news of a Pakistani computer virus called Brain, thought to be the first to attack personal computers. McAfee said that, at the time, it reminded him of the way his father would suddenly attack him.  His plan was to create an antivirus program and give it away on computer bulletin boards, with the hope that users would install it on their computers at work. They did, and the companies paid licensing fees, giving McAfee revenues of about $5 million a year by 1990.  McAfee Associates went public in 1992, making its founder’s stock worth $80 million, but he resigned in 1994. The company’s rise to prominence continued without him. Intel, the computer chip maker, bought the company in 2010 for $7.7 billion, then sold its majority stake to an investment firm six years later.  By that time, McAfee’s fortune had fallen to $4 million from $100 million, forcing him to auction off major assets and fly coach, and he had moved to Central America, seeking a simpler and cheaper life.  Before and after McAfee Associates was bought by Intel, the company tried to distance itself from McAfee. Before it sold the company, Intel tried to rebrand it as Intel Security. But it never shook its attachment to its founder and the brand he helped create, and the name McAfee was restored when it was sold.  In 2016, when McAfee tried to use the name with a new security company, Intel filed a lawsuit seeking to prevent him from doing so. Intel and McAfee settled the lawsuit, with McAfee agreeing not to use his name in the field of cybersecurity.